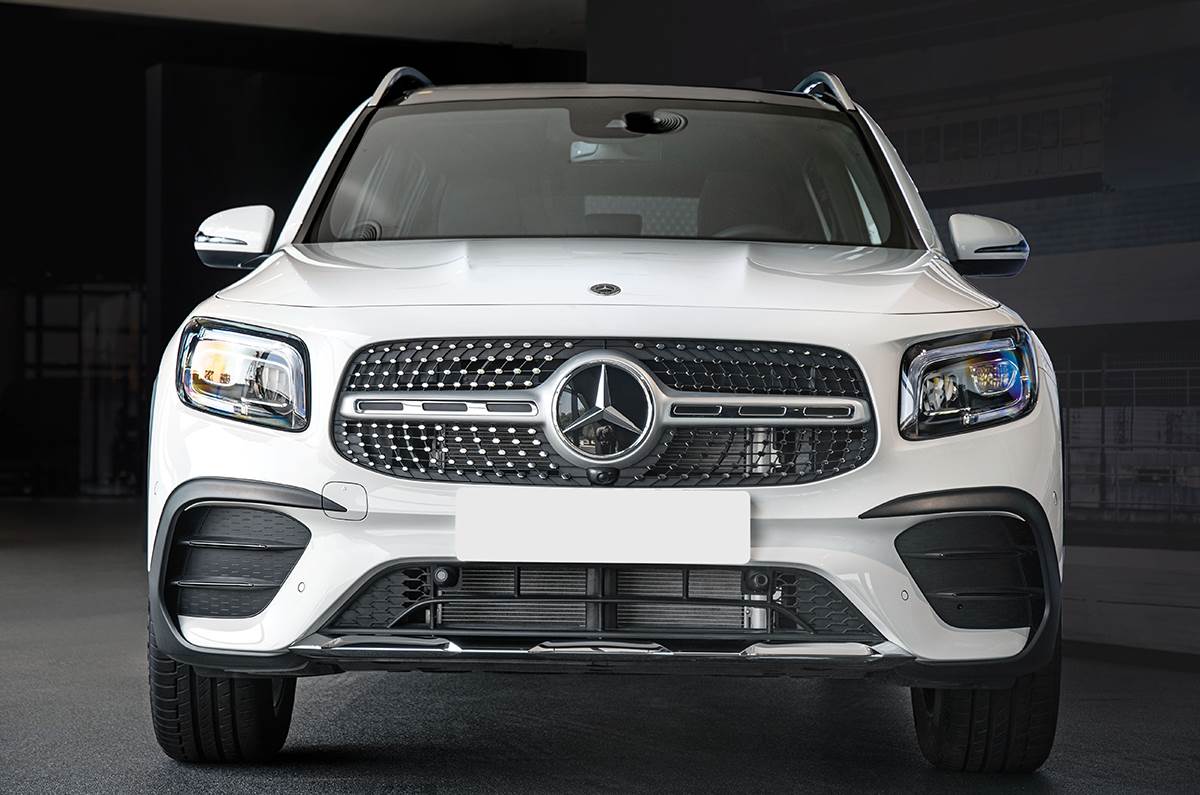 A more affordable three-row luxury SUV with a Mercedes badge on its nose – could this be the perfect recipe for India?

Three years ago, we were in Utah in the USA to drive the then-new Mercedes-Benz GLS. The towering 7-seater was going to be, quite literally, the next big thing for the German brand, and that would be especially true in India, where, despite its Rs 1 crore-plus price tag, it remains one of the most popular models. It even set a new sales record this year.

That’s not a surprise, though, is it? It employs a winning combo of SUV road presence, 7-seat practicality and a shiny three-pointed star on the nose. So, what happens when you scale that formula down a couple of sizes, and a couple of price points? Not only should it work; it should work even better.

It was only fitting, then, that Mercedes chose the same event in Utah to take the wraps off its first-ever GLB – a longer, taller, boxier, bolder, 7-seat derivative of the GLA compact luxury SUV. It almost seemed like an entry-level Mercedes SUV made with India in mind. So, you can imagine our surprise when we learnt it probably wouldn’t be launched here at all.

But sometimes good things take time, and on December 2, better three years late than never, we’re finally going to get the GLB in India. And to get an early taste of what’s in store, we’ve come to Abu Dhabi to sample the tiny three-row.

Having had a poke around the freshly unveiled car in 2019, and seen it evolve into the electric EQB we drove in July this year, we already have a pretty solid idea of what to expect from the GLB, but there are still some interesting things to note. For one, though it’s based on the A-Class and GLA’s compact, front-wheel-drive MFA2 architecture, this is by far the largest vehicle in that family. In fact, at 4,634mm, it’s almost as long as the higher-positioned GLC, and it’s even taller, at 1,662mm, which bodes well for interior space. 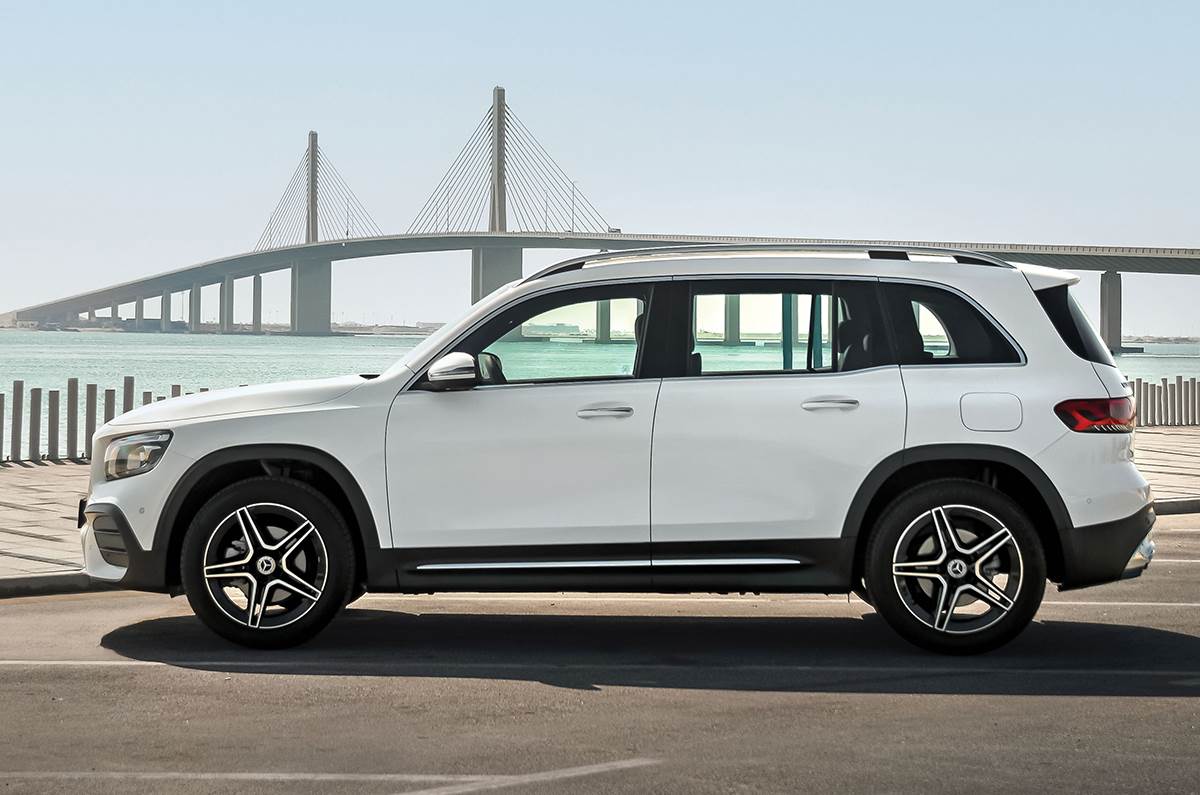 There’s an almost G-Wagen-like bluffness to the nose (unlike its EQB counterpart that switched to a smoother, more aerodynamic front end), with a flat bonnet, square headlamps and the signature Mercedes SUV grille with the big star at its centre. Even in this AMG Line spec, with its sporty bumper garnish and 19-inch alloy wheels, there’s a sufficient amount of ruggedness to it. 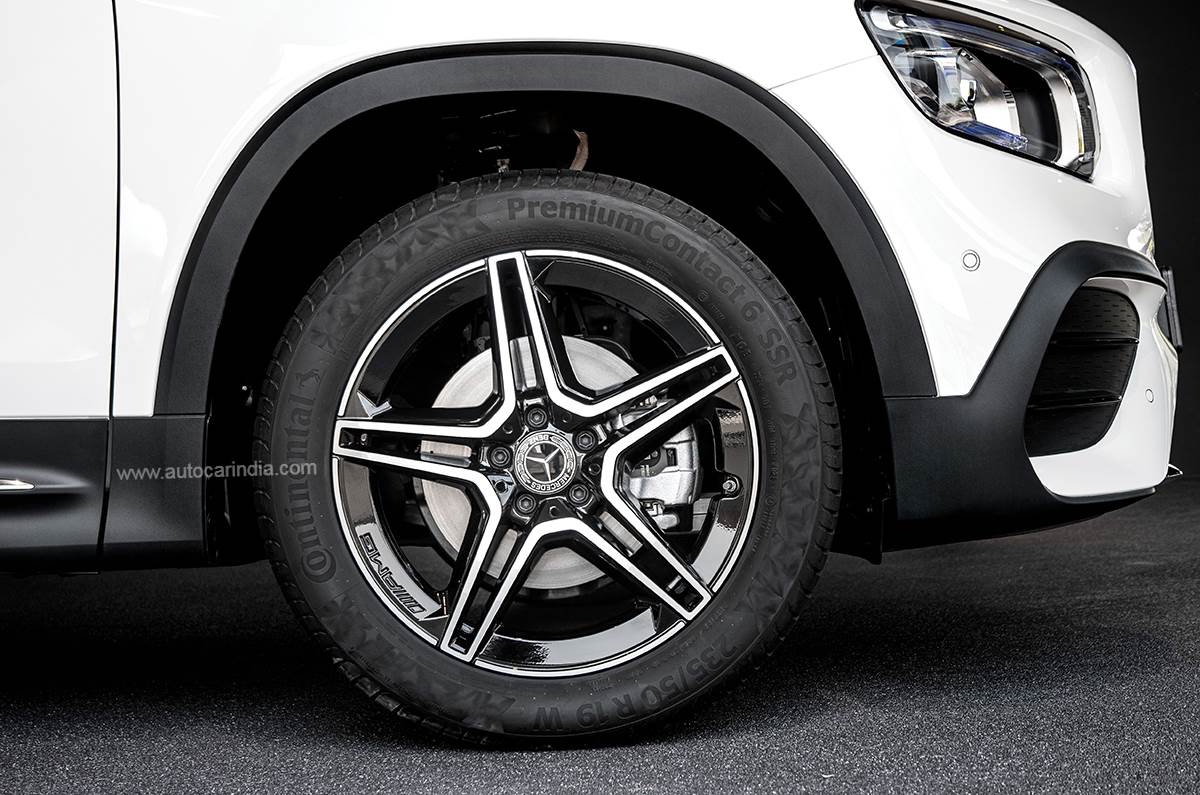 In profile and at the rear, the GLS connection is most apparent, with a look that’s stretched, but not van-like, thanks in a big way to the big, plastic-clad wheel arches, the kink in the huge window area at the C-pillar, and the upright tailgate. It’s the perfect antidote for those who feel the GLA’s look errs too far on the side of crossover. 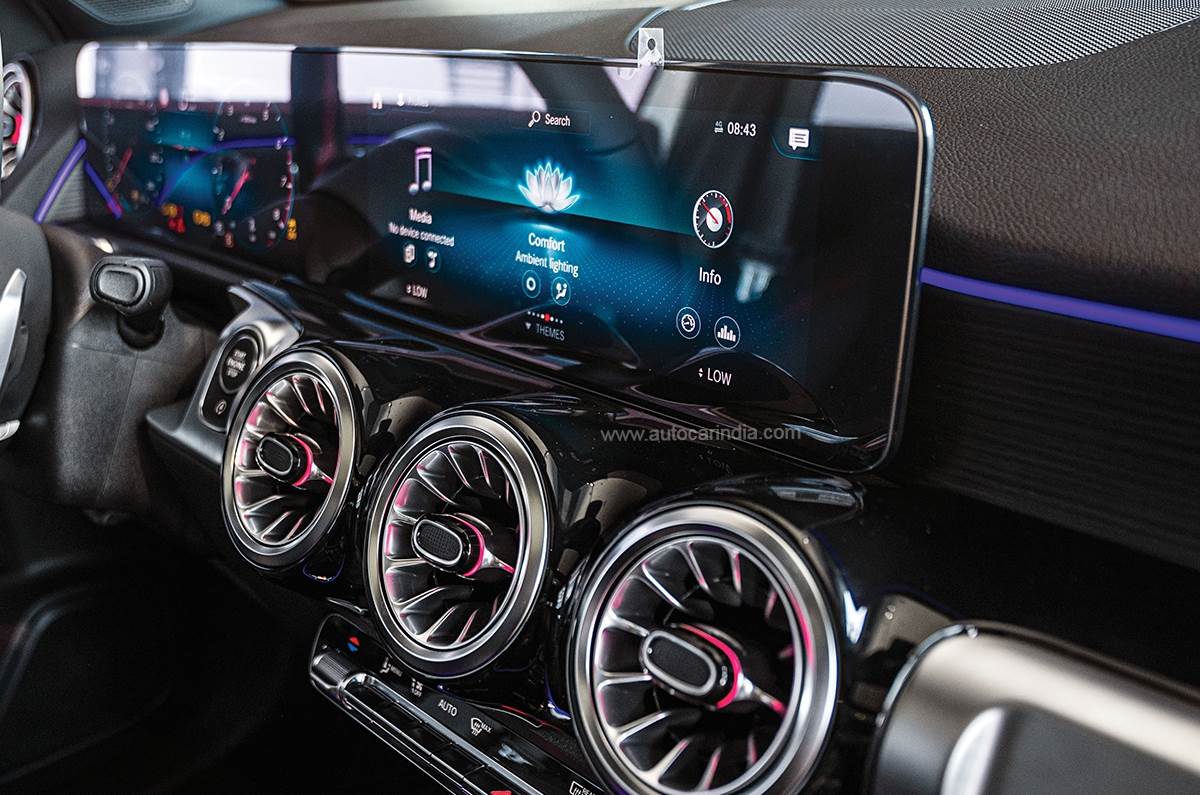 High-res, twin-screen MBUX infotainment is one of the slickest around.

Step inside and the dashboard is far more similar to that of the GLA, but even here they’ve made a subtle change in the form of chunky metallic trim pieces on the dashboard and door grabs that give off a tougher look. Those aside, you get the same well-crafted dashboard, with twin 10.25-inch MBUX screens serving your infotainment and instrumentation needs. Below them, the metallic, turbine-like AC vents return with colourful ambient lighting hidden in their frame; in fact, there’s ambient lighting on almost every visible edge of the interior. And if you’re wondering where the classic Mercedes door-mounted seat controls are, our test car had manual seats, but we will get powered seats in India.

Speaking of seats, it’s the ones aft of the driver that define the GLB. It’s worth noting that this is still a relatively compact car, so packaging had to be extremely well-thought-out to conceivably fit three rows in here. The middle row is nice and high set, giving you a good view forward, headroom is more than ample here thanks to the tall roof, and yes, that will likely include a panoramic sunroof. Seat comfort is pretty good too, with generous cushioning, but expectedly it’s not the widest, and the base is quite short, meaning thigh support isn’t great. The middle passenger will also have to contend with a slight hump in the backrest, as it split-folds in a 40:20:40 configuration.

But this should also give you a clue to how flexible things are here. The middle row, of course, split-folds, but it also slides back and forth; more on that in a moment. You can even recline the backrest to varying degrees for added comfort, and fully reclined and pushed all the way back, the space on offer is more than enough to keep the chauffeur-driven happy. 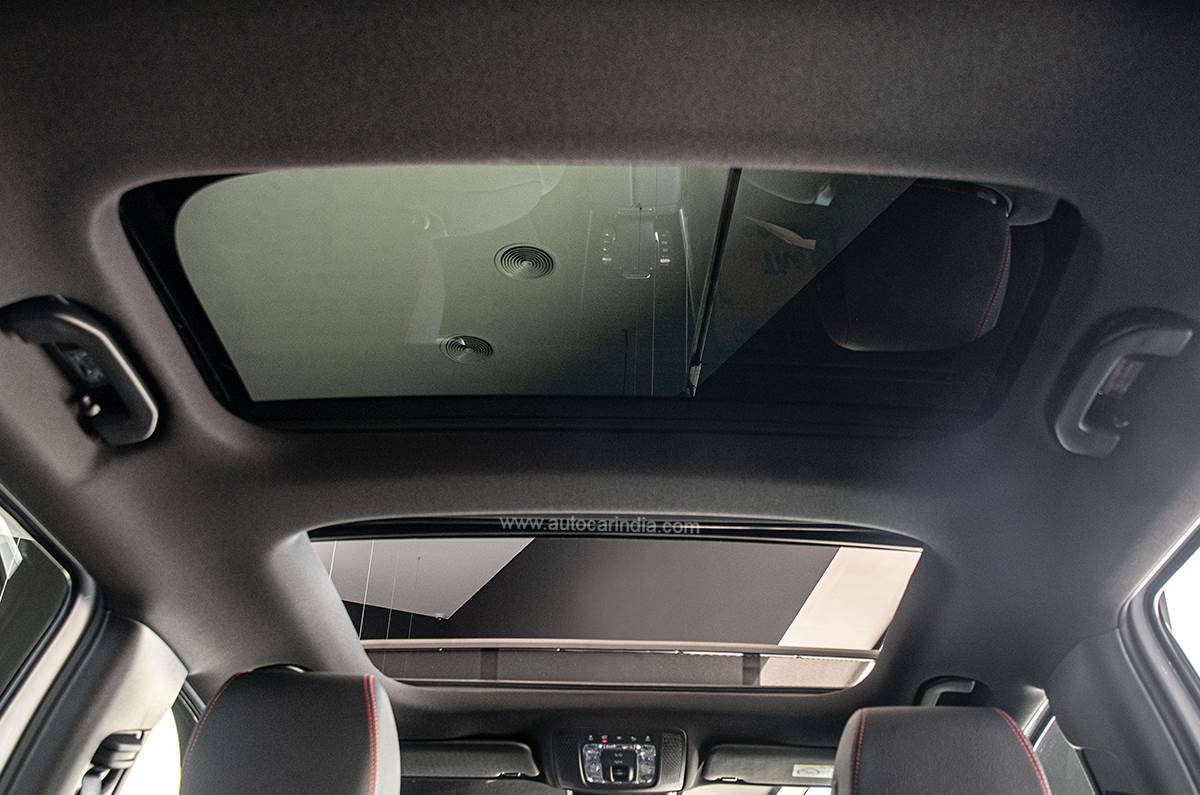 As you’ve probably guessed, with the second row set this way, the third row is rendered pretty much useless, but we’re happy to report that, with a bit of adjustment, you can find a happy compromise. Slid to its middle position, a six-footer can still fit in the second row with reasonable comfort, while a small adult (like myself) or a child, can sit behind them. Headroom and width in the last row are not much, and you’ll be in a knees-up position, but there’s place for your toes under the second row, and knee room is not as bad as you might think; I had almost two inches between my knees and the seat back. There’s even USB-C ports and cupholders back here.

However, getting into and out of the third row is a bit of an effort, because while the second row slides and folds, it doesn’t tumble forward fully like in, say, a Toyota Fortuner. This leaves you with a very narrow space for ingress and egress, and a tall, awkward step up from the outside. Like many 7-seaters, boot space with all three rows up isn’t a whole lot – just 130 litres in this case, so really, it’s a choice between passengers or luggage. You get a sizeable 500-plus litres with the last row folded, so an airport run for five shouldn’t be an issue.

Even though it’s a CBU import, Mercedes-Benz will be launching the GLB with the same powertrains as the GLA. This means the 220d diesel in 2WD and AWD guises, as well a 200 petrol with 2WD, which is what we’re driving today. It’s worth remembering, however, that the ‘200’ in this car isn’t the 2.0-litre engine as in the GLC, nor 1.5-litre mild-hybrid as in the C-Class, but instead the 1.3-litre unit found in the other MFA cars. 163hp 1.3 turbo-petrol shared with GLA; is refined but not the strongest.

Its 163hp and 250Nm, much like they did in the GLA and A-Class, feel sufficient in the GLB too, if not outright strong. It’s a very refined engine, provided you don’t rev it out too hard, and at city speeds, at least, it works well. Helping is the 7-speed DCT that, again, works well in relaxed driving. It can be a bit hesitant if you push it hard, and you will feel the engine’s lack of displacement at highway speeds. What we didn’t get to test, and this is worth considering given the GLB’s added practicality, is how it works when the car is fully loaded up. All in all, unless your usage is primarily urban, we suspect the 190hp, 400Nm diesel will be better suited to the job. You’ll immediately notice that the driving position is higher and more traditionally SUV than the low-slung GLA’s, and that automatically puts you in a less racy driving mindset. Compact it may be, but its long, tall proportions call for a bit more restraint. Of course, it’s far more agile and manoeuvrable than a full-size SUV like a GLE or GLS, with a steering that’s light and direct, and body movements that are kept in check. The roads in the UAE are mostly straight and smooth, so a full evaluation of the ride and handling will have to wait, but we can tell you the 19-inch wheels and tyres (the same ones as on the AMG Line GLA) do cause a bit of a thunk in the cabin over sharp speed bumps and lane markers.

As we said up front, the GLB formula seems so perfect, not just for India but a lot of markets, that it’s surprising other luxury carmakers haven’t done a small 7-seat SUV yet. The closest we’ve had is the Land Rover Discovery Sport, and that’s a whole segment above. But then, one thing that could derail this winning formula is the price. Since it is being brought in as a CBU import, the GLB’s price is likely to be considerably higher than the current established segment of ‘compact’ luxury SUVs, at around Rs 60 lakh-65 lakh, ex-showroom. This makes it a full Rs 15 lakh more than the GLA, and almost as much as today’s GLC. However, we hear the next-gen GLC coming to India in 2023 will move up in price considerably, giving the GLB a bit more breathing room. 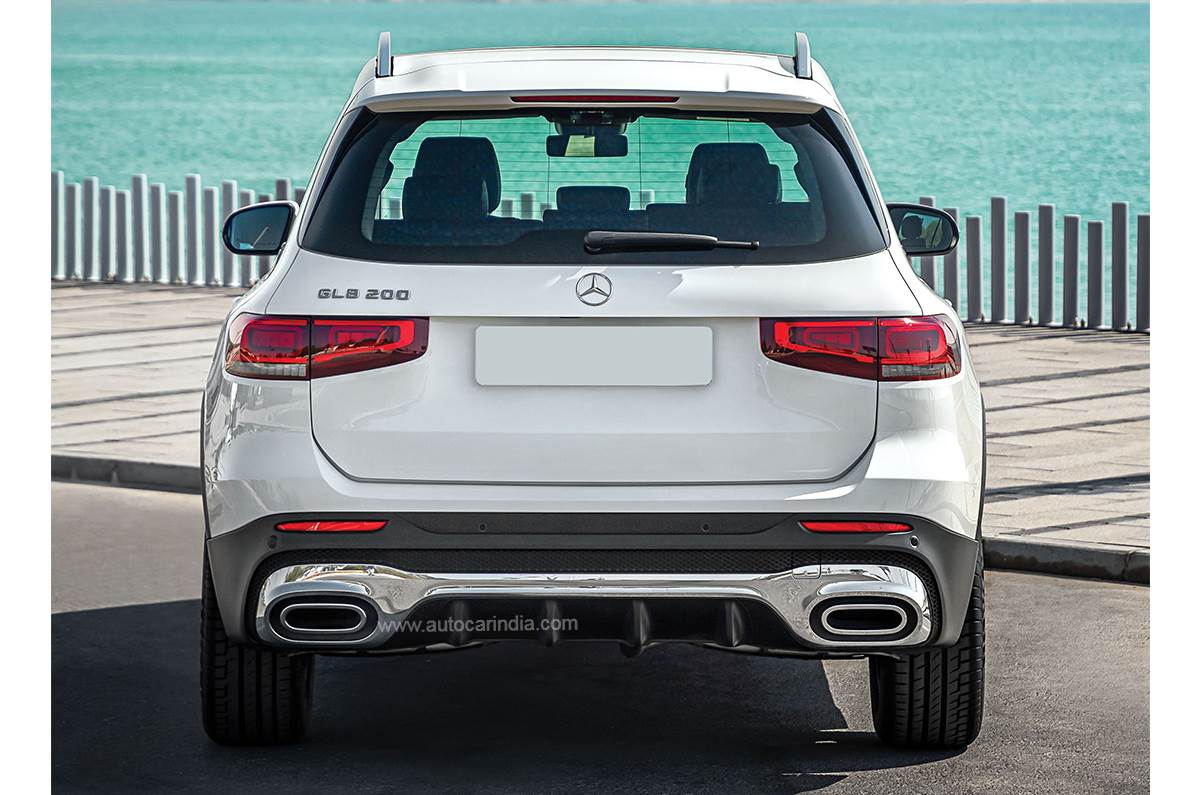 Due to it being a CBU, the GLB will be considerably more expensive than the GLA in India.

Nonetheless, there’s no escaping the fact it will be a very pricey SUV and that, along with the small volumes it’s likely to be imported in, will make it a niche offering. At its core, the GLB is a very appealing product, with a high-quality, well-equipped interior, great refinement and handsome looks, and for some, the added practicality of seven seats might just make it worth the stretch.