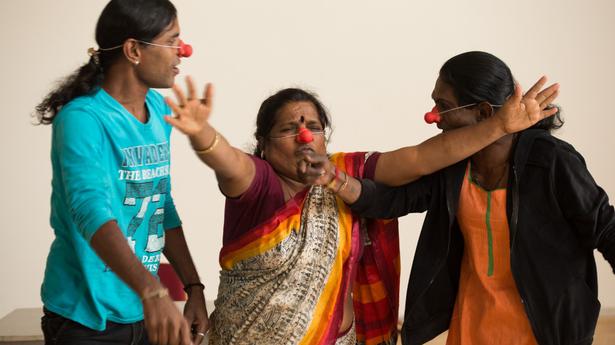 
On Sunday, nine transwomen, part of the Aravani art project, will take the stage at Rangbhoomi Spaces, Gachibowli with a play Nava. First staged in 2019, Nava tells the stories of nine urban transwomen through nine rasas (Navarasa).

The play was the result of a workshop to explore what ‘performance’ means to a community of transwomen artistes who have never performed on stage before. Nava grew out of a collaboration between director Sharanya Ramprakash and the nine transwomen from Aravani Art Project, over a six-month workshop . Nava is a fluid performance, growing with its performers, as they experience the stage, the stories get deeper and more intimate, finding new ground and performance language.

Sharanya says, “They faced many challenges to get to the stage. First it was finding a space that would allow transwomen to come for rehearsals every day; it also had to be well connected by public transport. Then it was tough for them to show up there at a designated time, as most of them either beg or are sex workers. It was a six-months process and we had to make sure it was meaningful. The only thing that didn’t need any effort is convincing them to be on stage for a play.”

In Nava, the transwomen bring their bodies, voices and stories to reclaim their rightful place – the centrestage. The performers take the stage to expand, challenge and defy fixed notions of what constitutes the Nava rasas and who can be its Nayakis.

Artistes Veena, Chandri, Shanti, Prarthana, Jyothi, Sandhya, Swetha, Purushi and Thara share a different rasa. Chandri’s ‘Adbhbuta’ is about how she wore a saree for the first time. Shanti flips our understanding of ‘Bhibatsa’ with a story of how she crawled through a sewage pipe to safeguard herself from the ‘normal’side. Prarthana tells you her secret in ‘Shrungara’, Thara makes a journey to meet her son and discovers ‘Karuna’, while Swetha explores ‘Shanta’ with the memory of her childhood friend. Performers tell stories, sing, dance, laugh, regale, provoke and challenge the audience.

Sharanya mentions that when an actor cannot make it to the stage, that part is left blank. “There is no replacement as no other person can tell your story the way you do. One of the actors lost her leg, so when she was recovering, her part was left blank. She is however back on stage with a bionic leg and she is delighted about it.”