More
HomeLifestyleblack and white with a burst of colours is the USP of...
Lifestyle 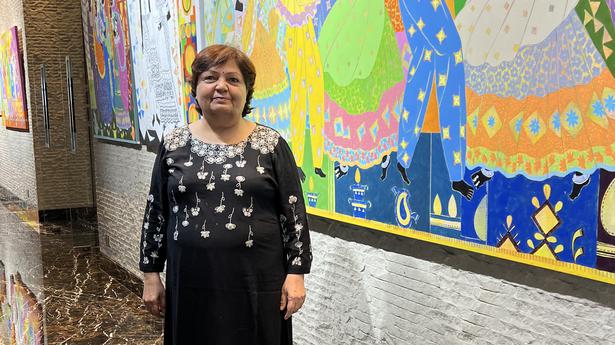 Anuradha Thakur, listed as one of the 100 women achievers of the country by the Ministry of women and child development (art and culture category) in 2016, started painting 22 years after she graduated from Arts College in Pune. Even though she graduated in Fine Art, abstract art – the only subject the college offered in 1982 – didn’t appeal to her. The artist from Ahmednagar in Maharashtra is in Hyderabad for a 10-day show titled Serene Ecstacy at Park Hyatt. She explains, “It is not that I dislike abstract art, I just couldn’t make myself work on abstracts. Instead, I started to work with NGOs on art projects for children and this, in turn, took me to various tribal hamlets of India and introduced me to a set of people, their lifestyle and customs that are not seen every day.”

One of her paintings titled ‘Ethnic Serendipity’ finds a place in the Prime Minister’s office. “It is a happy painting of a group of tribal people from Gujarat dancing,” she adds.

For over 30 years, Anuradha worked with children in 70 villages, along with the Institute of Health Management, Pachod (IHMP), to bring about qualitative development and behavioural changes in them.

During one such work with the NGO called SEARCH, in 2003, Anuradha landed in the tribal village of Gadchiroli in Maharashtra. She was fascinated by the simple and happy life they led. “It was the safest place I had been to in so many years. Unlike other tribal folks, the people of Gadchiroli do not wear too many ornaments. Their way of life was love and contentment. After spending a week in the village, I felt the urge to portray the beautiful life of the people; from thereon my journey as an artist began,” she says.

The USP of Anuradha’s paintings is black and white with a burst of colours. Even though the black stands out, no single colour dominates her work. Why did she choose black and white with a dash of colour to portray the lives of tribal people? “That is how they are — black and white, there is no pretence in them. The colours are used to show their sense of fashion with a lot of attention to the jewellery they wear,” she explains.

Anuradha doesn’t adorn only her female figures with jewellery, the men also use jewellery. “That’s the reality. In some tribal cultures, men also wear some jewellery ,” she smiles.

She further explains, “My black does not depict sadness; I use the colour to show happy, energetic and strong people.” Anuradha has travelled to remote parts of Maharashtra, Gujarat, Madhya Pradesh, Rajasthan, Jammu, Himachal Pradesh and Assam, Nagaland and Meghalaya.

Her works will be on display at Park Hyatt till July 5.