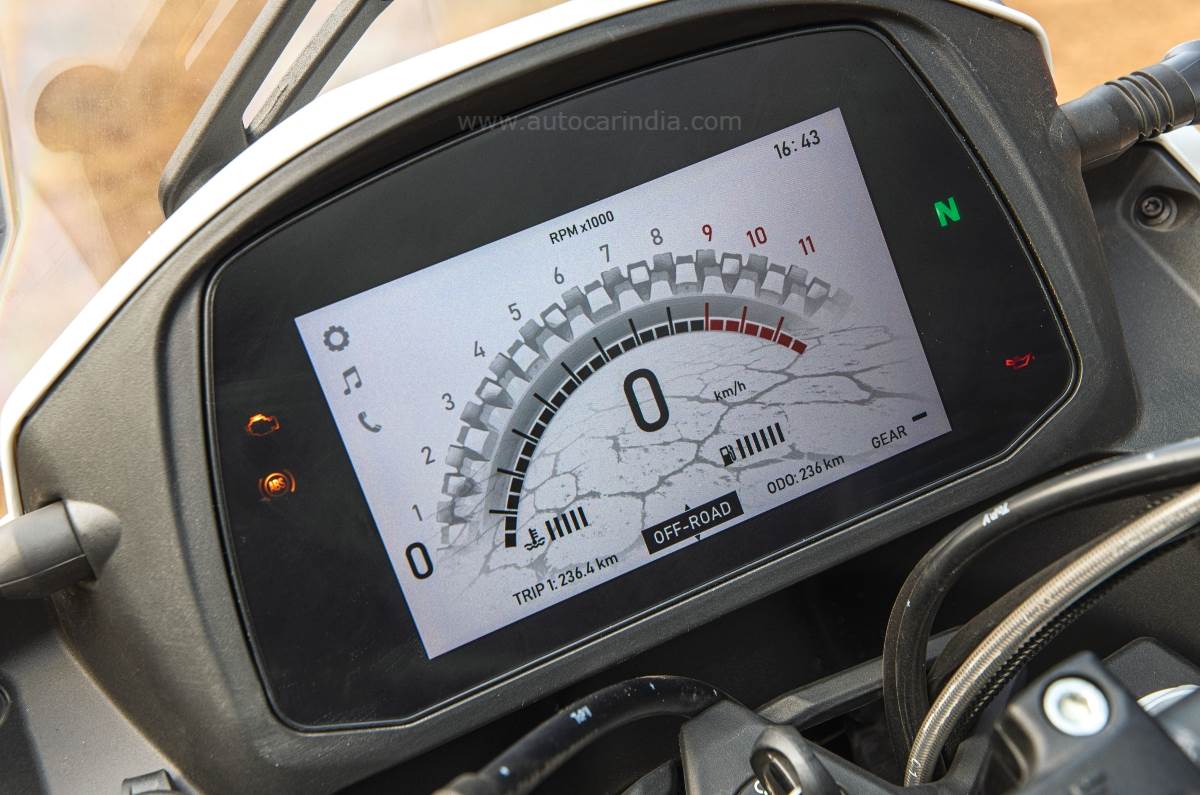 Kawasaki’s Versys 650 gets a new rival in the form of the Moto Morini X-Cape 650. We put them head-to-head to see which is the better road-biased adventure tourer.

The Kawasaki Versys 650 has ruled over the middleweight adventure tourer segment in India for years now, and with good reason. It’s proven to be a refined and comfortable mile muncher from one of the most reputed names in the game, and it has also emerged victorious from our earlier comparison with the Triumph Tiger Sport 660. However, its reign is being challenged yet again, this time by a new entrant in the Indian scene.

Enter the Moto Morini X-Cape 650. And on first look, it’s definitely dressed to impress. The X-Cape 650 is a substantial motorcycle that has the stance of a Dakar rally bike, consisting mostly of flat panels concentrated at the tall front-end. The design is unique, some might say quirky, but there’s no denying that it’s an attractive motorcycle. The Versys 650 also has a striking design and the updates it received earlier this year have made it appear sharper than before. Still, on its small 17-inch wheels, the Versys does suffer a bit from a lack of proportion. The signature Kawasaki Lime Green paint is eye-catching too, but despite that, it’s the Moto Morini that definitely grabs more attention out on the road. Good start for the Italian then.

Morini’s larger screen gets a cool graphic in off-road mode.

Another area where the X-Cape one-ups the Versys is equipment. While both feature TFT screens, LED lights, adjustable suspension at both ends, adjustable windscreen, traction control and dual-channel ABS, the Moto Morini also gets a USB port, a larger 7.0-inch display, ride modes (Road and Off-road) and a luggage rack as standard over the Versys. Our X-Cape test bike also came with the optional crash guards. So far so good for Moto Morini, but things start to swing in the Kawasaki’s favour as soon as we get into the saddle. 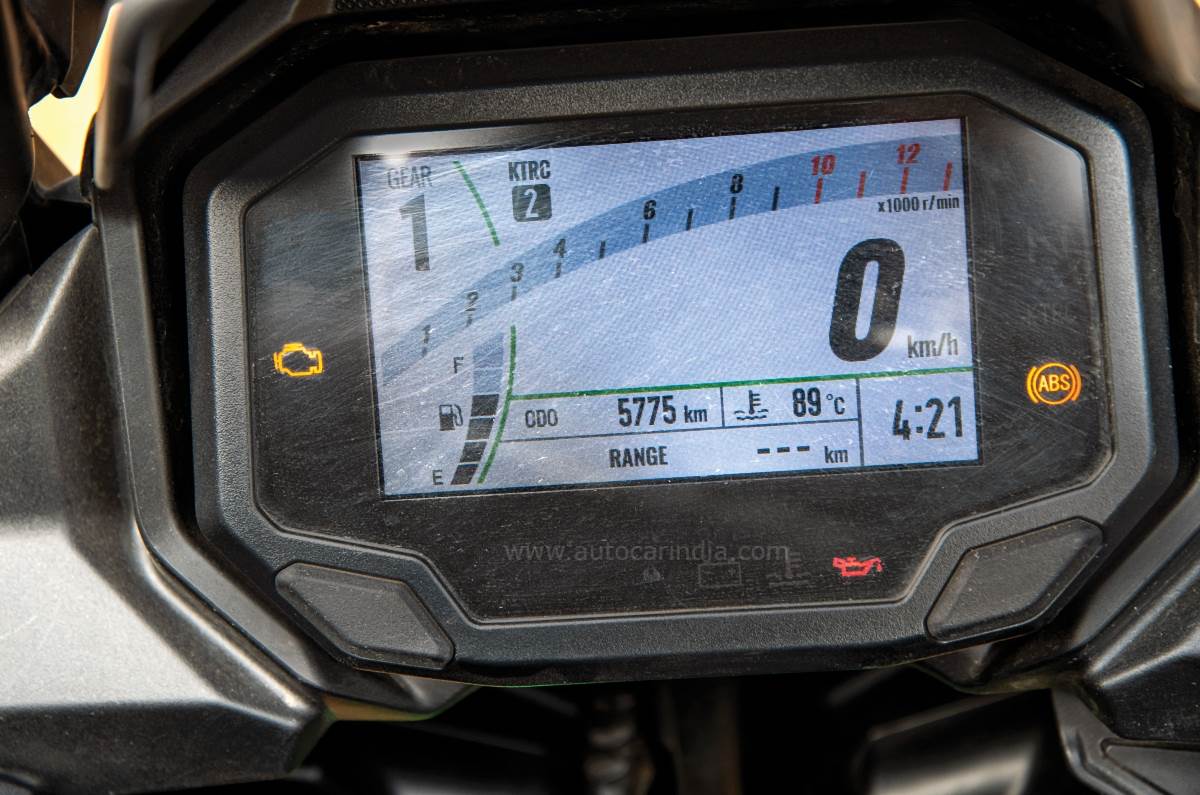 Versys’ screen is detailed but appears a bit too small.

The Versys 650 has a softer seat, a more upright riding position and a lower-set and narrower handlebar in comparison to the X-Cape. The Morini’s seat is on the firm side and coupled with the wide and high-set handlebar, seating ergos are not as comfy as on the Versys, although standing ergos are better. Its lower seat height also means that shorter riders will need to stretch to reach the bars and this will definitely be felt in the rider’s forearm while doing long distances. However, the X-Cape’s wide handlebar does provide good leverage in traffic.

Once you get going, the Versys immediately feels more energetic and that does come as a surprise given how closely they’re matched in the engine department. Both motorcycles make use of a 649cc, parallel-twin engine and thus have identical bore and stroke figures of 83mmx60mm. The X-Cape’s CF Moto-sourced unit (which as far as we can tell is a licensed version of the Kawasaki motor) makes 60hp and 54Nm, while the Kawasaki puts out a healthier 66hp and 61Nm. The Versys also weighs 14kg less, but the difference in the feel of the performance is even greater than the numbers would suggest. In our performance tests, the Versys 650 did 0-100kph in 4.78sec while the X-Cape is over a second slower (5.97sec), putting it on par with the KTM 390 Adventure. The Kawasaki betters the Moto Morini in terms of in-gear acceleration as well. 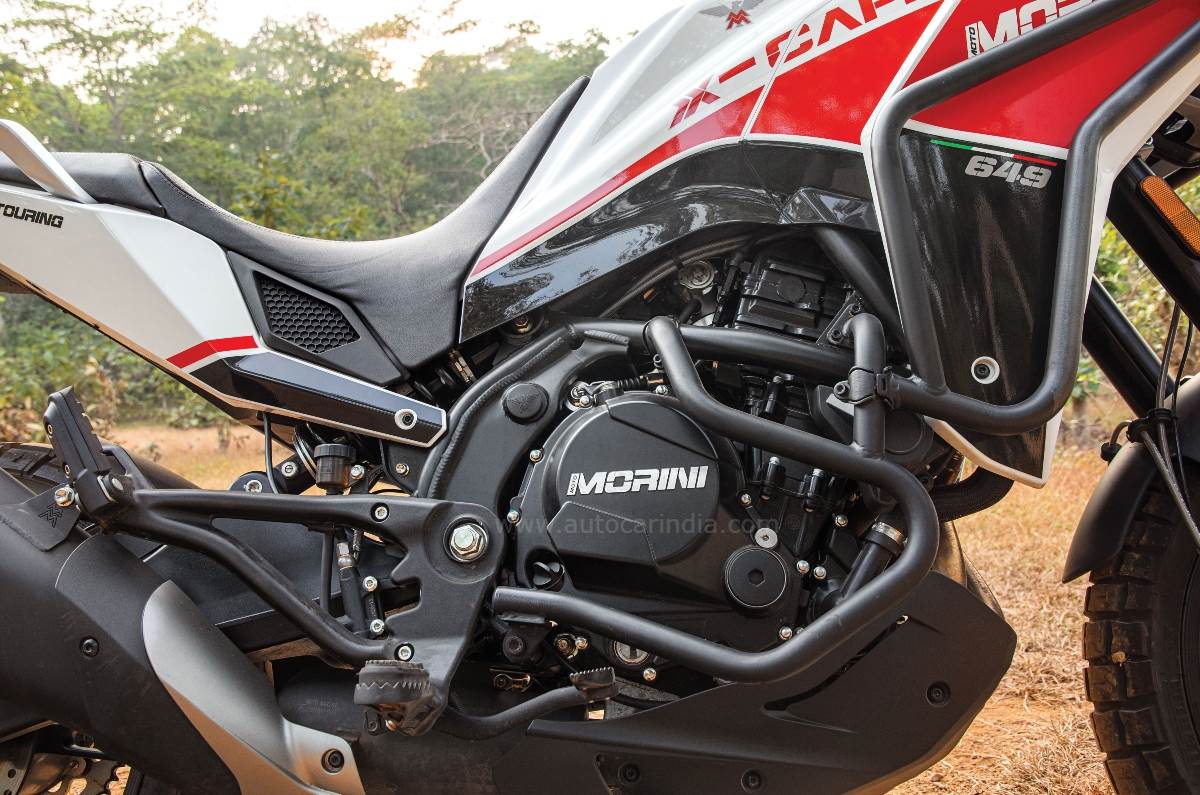 X-Cape’s engine size and design are very similar to the Versys’.

As for how they feel in the real world, the Versys has much better bottom-end grunt and feels punchier at the top of the rev range too, with the X-Cape having a more linear power delivery. The Versys also trumps the X-Cape in terms of heat management and refinement, although our X-Cape was yet to have its first service, which ideally would make it a bit smoother. The Moto Morini does sound nicer of the two, however.

Both also use a 6-speed gearbox, but it’s the Versys’ unit that feels more precise and has a lighter clutch lever action. The X-Cape’s gearbox is also good, but it can feel clunky at lower speeds. As for the brakes, both have more than adequate stopping power on offer but it’s the Versys’ Nissin units that provide more feel. 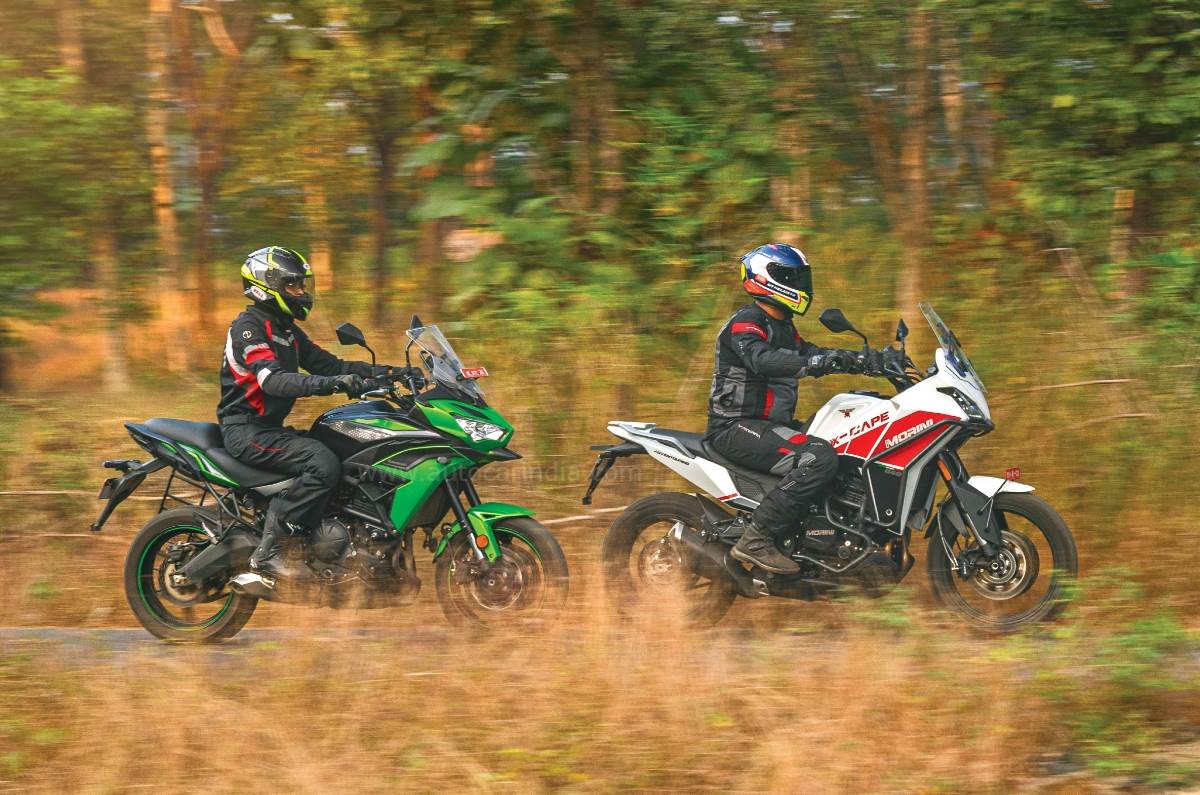 Both motorcycles get adjustable suspension at both ends to tune the set-up.

Suspension is an important aspect of any long-distance adventure tourer and in this regard, the Versys emerges on top. In their stock settings, the Kawasaki has the plusher ride and it does a better job of rounding off sharp bumps. Meanwhile, the Morini’s set-up feels stiffer at lower speeds, but improves as you pick up the pace. What’s good though is that both motorcycles get adjustable suspension at both ends, so there is scope to tune the set-up.

Team Green’s middleweight tourer also impresses with its handling, as it feels sharper and more agile than the X-Cape, which, on the other hand, feels its weight when you start chucking it around. However, the tyres are an area where both these motorcycles fall short. The Kawasaki’s road-biased Dunlops have decent grip but provide little feedback, while the Morini’s semi-knobby Pirellis aren’t suited for its touring capabilities, and it would have fared better with more road-biased tyres.

In terms of build, the Moto Morini feels largely well put together, with panels gaps being consistent. However, our test bike’s lights started to fog up and the windscreen developed a rattle in less than 1,000km. The backlit switchgear too feels nice to operate, although the high beam switch felt flimsy without a clear feeling of engagement. The Kawasaki, meanwhile, just feels better put together and quality of materials are a notch higher. 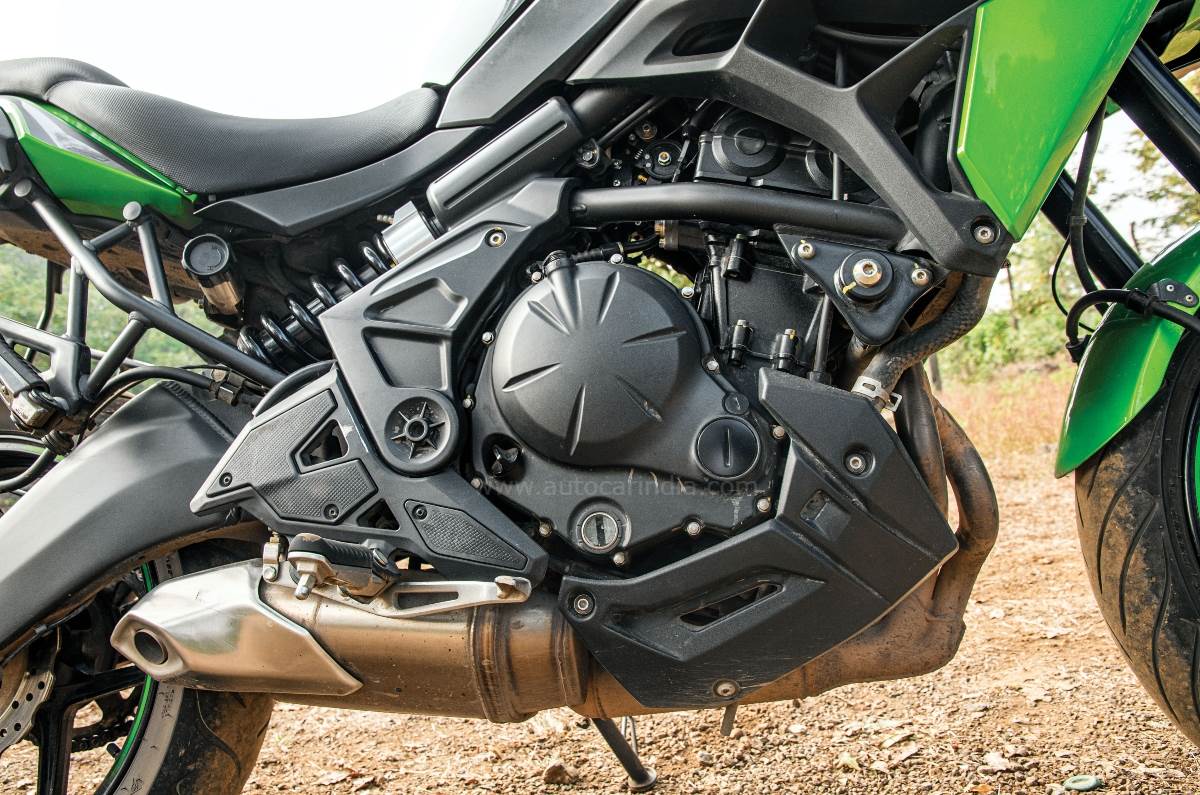 Wind protection is also important for adventure tourers and here both bikes are closely matched. While the Kawasaki’s screen offers marginally better protection, it is a two-hand process to adjust it. And though the Morini’s windscreen can be adjusted by one hand, the mechanism is quite cumbersome to operate.

You have to hand it to Moto Morini, as the X-Cape 650 genuinely feels like a nice motorcycle that has a lot of things going for it. It is certain to find takers in our market, given its style, uniqueness and features. However, it only costs Rs 16,000 less than the Versys 650, which just feels like a more rounded road-touring package, as it excels in most departments, and given that it’s been a proven product for years, makes it really hard to beat for any competitor, let alone one that has just entered the market. But as far as road-focused ADV tourers go, the Kawasaki Versys 650 continues to reign supreme and is the middleweight adventure tourer we’d put our money on.