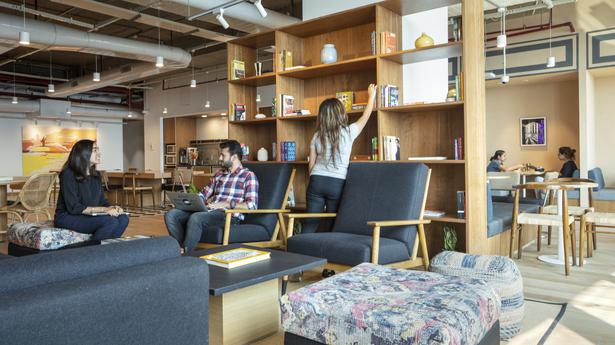 “Workplaces are becoming location agnostic,” says Santosh Martin, Chief revenue officer of WeWork India, a chain of coworking spaces that has 800 locations across the world, including 36 in India.

An office is no longer synonymous with its location or sprawling premises. As even mainstream tech and management companies rethink the way they work, there is now an idea that the small-town professional with big dreams might not need to relocate to a metro city — especially with a global health crisis yet to fully peter out — for the sake of a job alone.

Access to better technology at affordable prices and reverse migration (people returning to their home towns since the pandemic) has added to the demand. “Many employees returning to small towns still want an office space to work remotely,” says Vigneshwaran  Pitchai, co-founder of Quartr Design, adding that he moved from Chennai to Coimbatore during the pandemic and operates out of a co-working space in the city.

Vigneswaran says many large companies, including Deloitte and Freshworks have bought big co-working spaces that cover 3,000 seats in small cities like Coimbatore, Pune and Meerut as the resource costs are less compared to metros. Santosh of WeWork backs this up: “As the concepts of reverse migration and work near home gain traction, flexible workspace operators are tapping into the growing demand from the scattered workforce in smaller cities, with various players planning expansion in tier II and tier III cities.”

The Cove has coworking spaces in Chennai and Bengaluru

The implications of this shift are many. Smaller cities are seeing a spurt in co-working spaces like never before; larger cities are seeing non-traditional workplaces like museums and boardgame centres open themselves to coworking; firms that used to pride themselves on sprawling, bustling campuses are now downing shutters and working hybrid. Co-working spaces, once the refuge of hipster startups and creative freelancers, have now gone mainstream. And if the last two years of on-again, off-again lockdowns have taught them anything, it is that flexibility is key.

“The past two years have witnessed a steady rise in hybrid working models leading to flexible workspaces gaining higher preference over traditional models. Large organisations and enterprises have turned to flexible workspaces to provide them with hybrid, cost-effective and agile business solutions, as they relook at their real estate requirements. Presently, enterprises account for 60% of our member portfolio, with companies such as Colliers India, Khaitan & Co, Tata Sky Broadband, 3M and more choosing WeWork as their workspace of choice, and the remaining 40% comprising startups, freelancers and SME members,” observes Santosh.

Smaller players are also cashing in on this seemingly long-term — if still volatile — trend. The Cove used to be a co-living space in Bengaluru before it took up an old bungalow in Chennai’s Kotturpuram in 2018, turning it into a co-working space that can accomodate 300 people. “We became fully operational in 2019. We began with a set of clients who already wanted to be with us: most of them were startups,” says The Cove’s managing director and co-founder Sumant Rao over a call from Bengaluru.

He continues, “Prior to COVID, we had never seen larger firms coming to us. Now, we are approached by multinational corporations who have, say, a 100-strong team in Chennai, and want to reserve a 30-person space to use in rotation among them.” The Cove’s client base is changing, and so is the list of demands: increased internet bandwidth and dedicated VPNs for confidential work for instance. “Some clients want their servers to be completely in their control,” says Sumant.

Other demands took the team by surprise: “Our Kotturpuram premises are green and airy, and get plenty of sunlight. It was a big draw during COVID. We received requests for a daily sanitisation protocol that was almost like a hotel turndown service,” says Sumant.

Another shift in demand is from solo chairs on an open shared floor, to dedicated cabins per office. “This is not only for privacy, but also because people want to spend some time exclusively with their teams. We are also getting demands for soundproofing and screens for video calls, and either larger desks or alternate ones so that people don’t sit within elbowing distance,” adds Sumant.

So now, instead of entirely open floors, The Cove Chennai and Bengaluru keep certain segments of some floors cordoned off. “These work as private offices for full teams. We give them access control: meaning a limited number of swipe cards are given out, which the HR of that firm rotates among its employees,” says Sumant.

For employers, the biggest draw of this system, as against renting a floor of a traditional office building, lies in the flexible commitment. Girish Balachandran, founder of communications consulting firm On Purpose, explains: “If I lease regular office space, it will have to be at least a one-year lease. But we don’t know what the COVID situation will be like three months from now, even in 2022. There are talks of a potential fourth wave… It makes far more sense to take up a space at WeWork for one month or two, and renew it as and when we need it.”

On Purpose gave up its offices two years ago. Girish admits that co-working spaces are far more expensive, but adds that, as a team leader, there are other considerations that make the cost worth it. “I don’t have to worry about the upkeep of the place. I don’t have to worry about hygiene and ventilation, and take care of the added staff required for it. That is a load off my shoulders,” he states.

Another plus point to working like this is the freedom it gives him to hire talented people. “Earlier, we had teams based in Delhi and Bengaluru. Now, though most of our team is from these two cities and Mumbai, we also have people working from Ooty, Pune, Karnal, and Meerut. They don’t have to worry about shifting out of town. We fund two days per week at a local co-working place for each of them, since we don’t know if everyone’s home environment allows them to work in peace.”

All work and some play

Others who need a break from work from home, need only to look around their city. Local businesses and institutions are also jumping onto the co-working bandwagon. For instance, Bengaluru’s Indian Music Experience museum is offering people the option of working from its premises for ₹250 a day.

In Chennai, boardgaming centre The Board Room has cordoned off its first floor, for people who want to work from the peace of its refurbished Mylapore bungalow. Packages include a complimentary beverage for ₹350 per day. Its Eat-Work-Play package, at ₹450 each day, lets patrons pick a board game from the massive collection to play during work breaks, and also provides credit on their food offerings.

“Our primary product is still the boardgaming lounge,” says co-founder Varun Devanathan. “We get an average of 250 gamers per week, and 35 people for the co-working space. But the people who use it, do so loyally. I guess some people really need to mix their work and play,” he says with a laugh.

With inputs from K Jeshi and Nivedita Ganguly