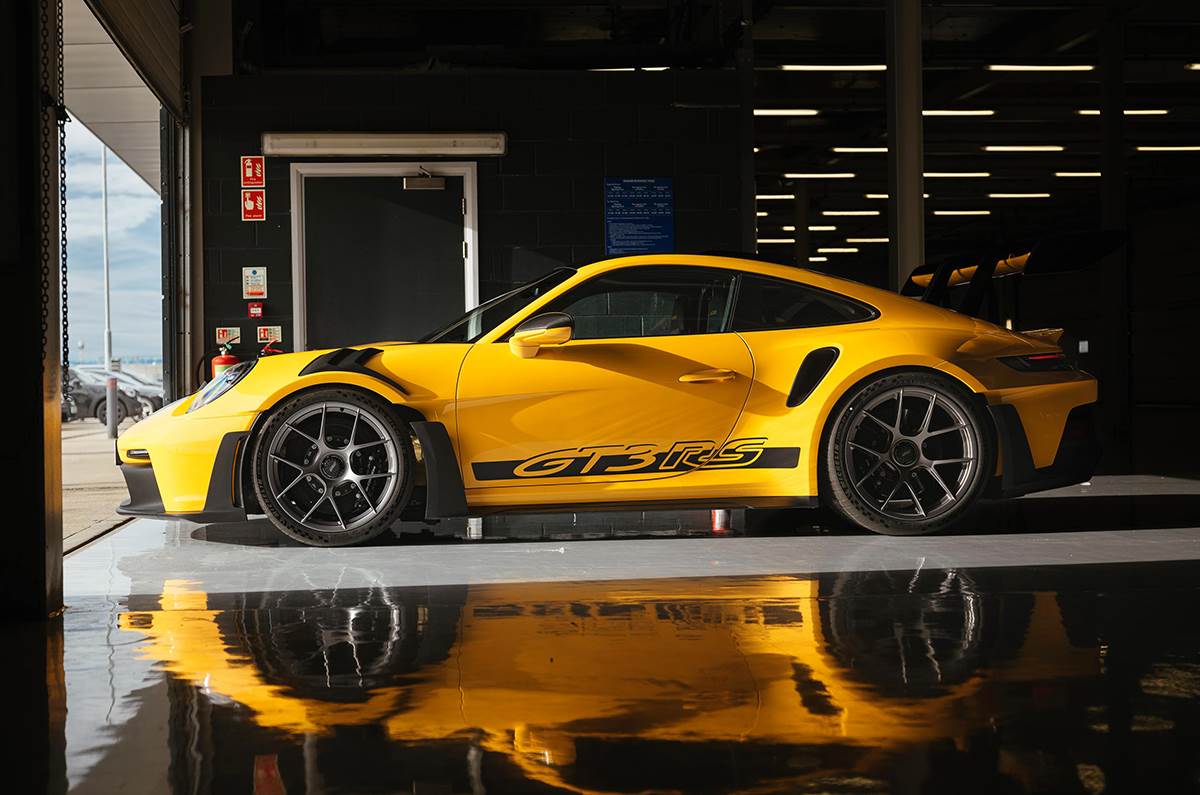 The latest Porsche 911 GT3 RS comes with ground breaking aerodynamics to make it the ultimate track tool with a number plate on it.

You would think that the purpose and relevance of the new 911 GT3 RS, the most track-focused production Porsche ever, would be lost on Indian customers. It is quite the contrary in fact. With race tracks mushrooming all over the country, there’s no better time than now to put your deposit down for the most extreme 911 yet.

Essentially a race car with a number plate on it, the GT3 RS is the result of decades of motorsport experience (and excellence) distilled into what is possibly the most engaging and uncompromising road legal machine. Except that, apart from niceties like air-conditioning and an infotainment system (which can’t be deleted for purists) it’s not really a road machine. Its natural habitat is the BIC and MMRT, where, in the hands of the right driver, it could easily break production car lap records. This latest Porsche is all about speed, blinding speed and it looks the part even when standing still.

Track-bred 911s are known for their massive wings, but the one on the GT3 RS wings it to the next level. The humongous rear wing, which is big enough for the Porsche management board to use as a conference table, sets the tone for what the new GT3 RS is all about – aerodynamics.

Honed in a wind tunnel, the new GT3 RS has a number of ground breaking aero aids that generates a record downforce – 860kg at 285kph, according to company. That sort of air pressure maybe good around corners, but not on the straights, and hence, to give you the best of both worlds – downforce in corners and low drag down the straights – Porsche have brought F1 tech to you.

This is the first Porsche to have a Drag Reduction System (DRS), which activates automatically or with the push of a button. Apart from making you feel like Messrs Hamilton and Verstappen, it optimises the car’s aero efficiency around a circuit in the quest for the best lap time. 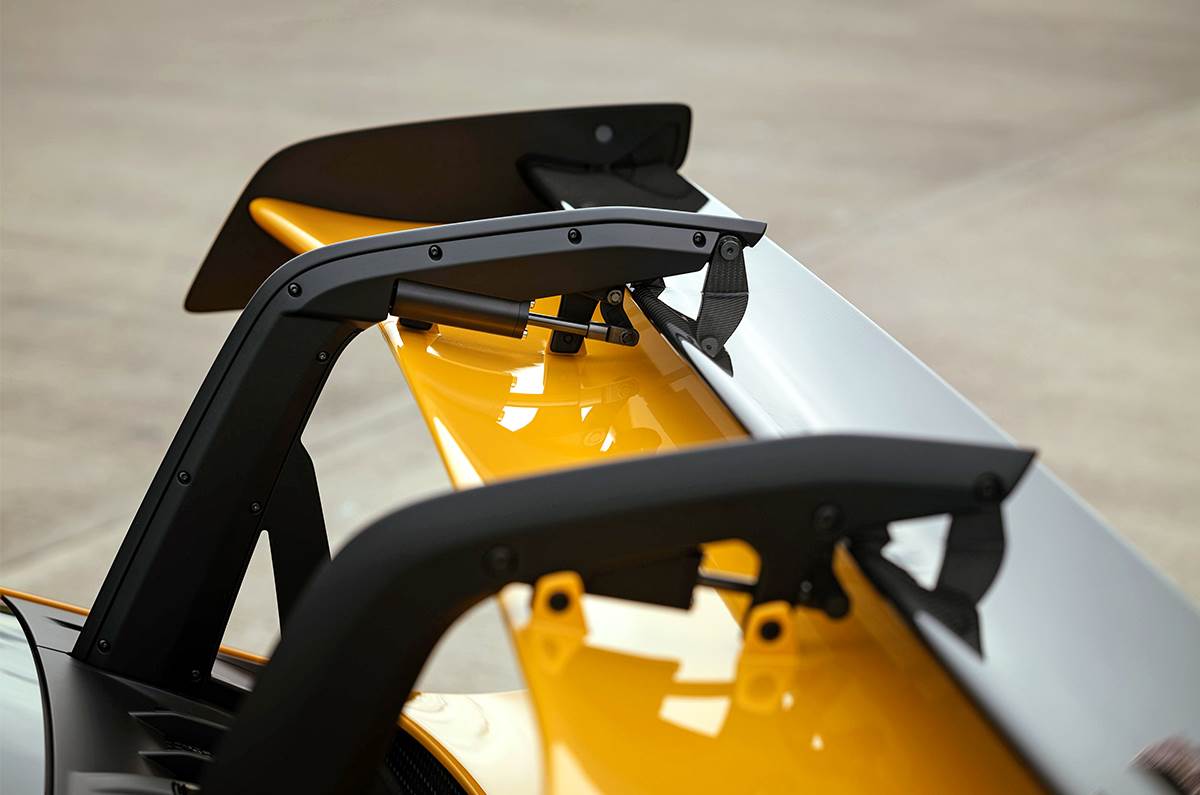 The GT3 RS’ party trick is the hydraulically actuated rear wing flap, which snaps up (for downforce) or shuts flat (for low drag) like an F1 car’s DRS system, and this can be controlled via a button on the wheel. Otherwise, DRS will activate automatically above 100kph, or if your revs are above 5,500rpm, if the throttle is at least 95 percent open, or lateral acceleration is under 0.9g. Barrel into a corner, pile on the g-forces, and the rear wing snaps up, the system sensing you need more downforce. 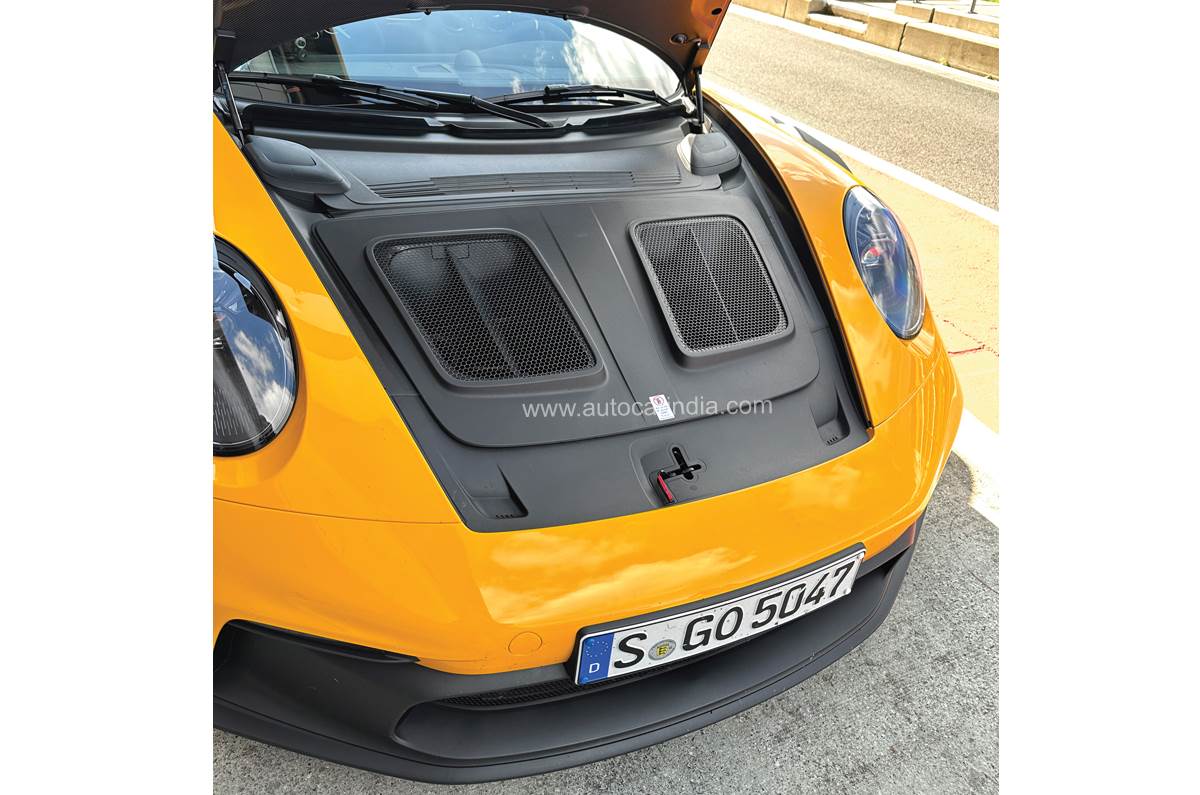 Central radiator leaves absolutely no space for any luggage.

The GT3 RS’ aero wizardry extends to the nose as well to maintain the downforce balance between the front and rear. In the quest for better air flow, Porsche has ditched a long standing tradition in 911’s for the first time. There’s no front trunk or frunk, so there’s absolutely no luggage space. This area is now usurped by a central radiator, which in turn does away with the pair of side radiators on either side, the 911’s long-standing cooling system layout.

With the side radiators gone, space is freed up to house moveable vanes, which are part of the active aerodynamics system. These vanes or flaps, which generate downforce in the front are electro-mechanically activated and work in tandem with the rear wing. 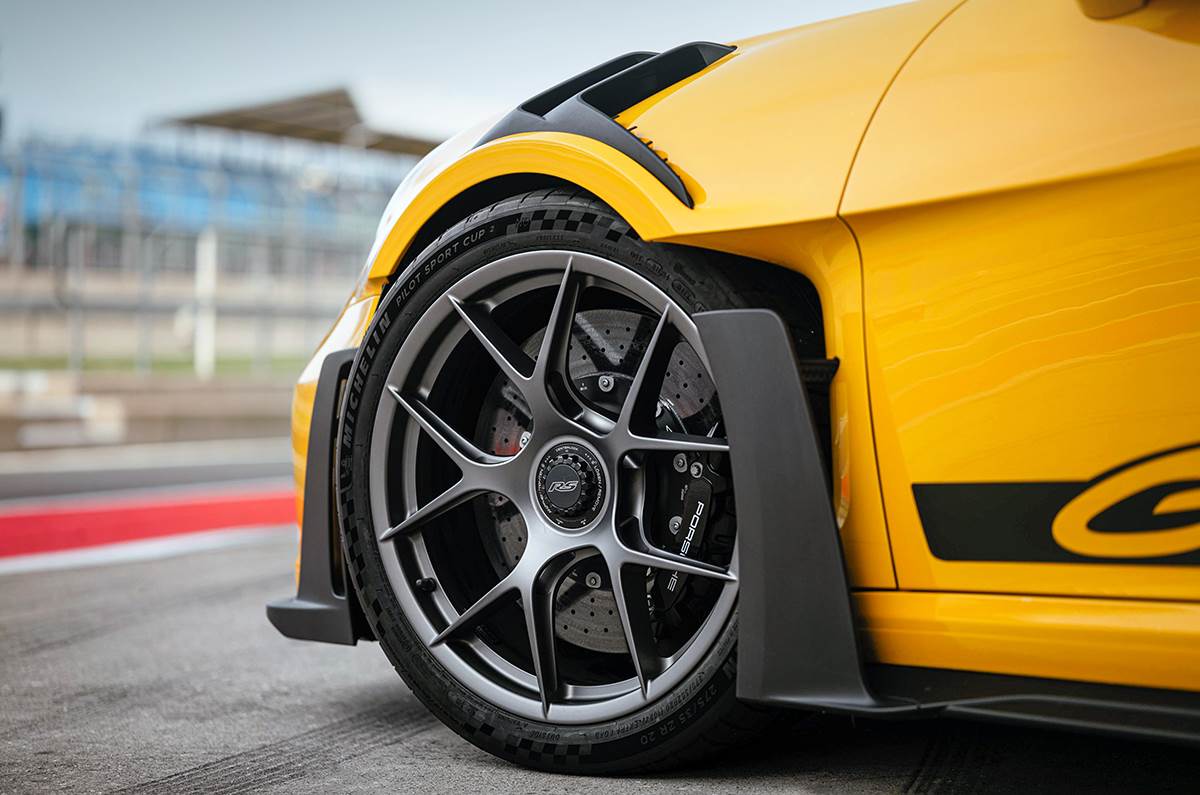 Vents above and behind front wheels are all part of the aerodynamics that define the 911 GT3 RS.

The attention to detail can be seen in the way the hot air from the radiator blasts out of the black bonnet ducts, which is directed away from the engine intake ducts on the roof and sides. Why take so much effort? Naturally aspirated engines hate high ambient temperatures and Porsche says that for every degree 10 degrees increase in temperature, you lose 15hp of power.

Speaking of the engine, the new GT3 RS gets the same naturally aspirated 4.0-litre flat-six revving to a hysterical 9,000rpm. Hotter camshafts have upped power by a very mild 5hp to 525hp. The standard seven-speed PDK gearbox (there’s no manual) has an overall shorter gear ratio than the 911 GT3. However, it’s clear that Porsche this naturally aspirated engine, unlike a turbo, has reached its limit, and Porsche has squeezed out whatever it could. But that doesn’t make it a slow car by any stretch of imagination. 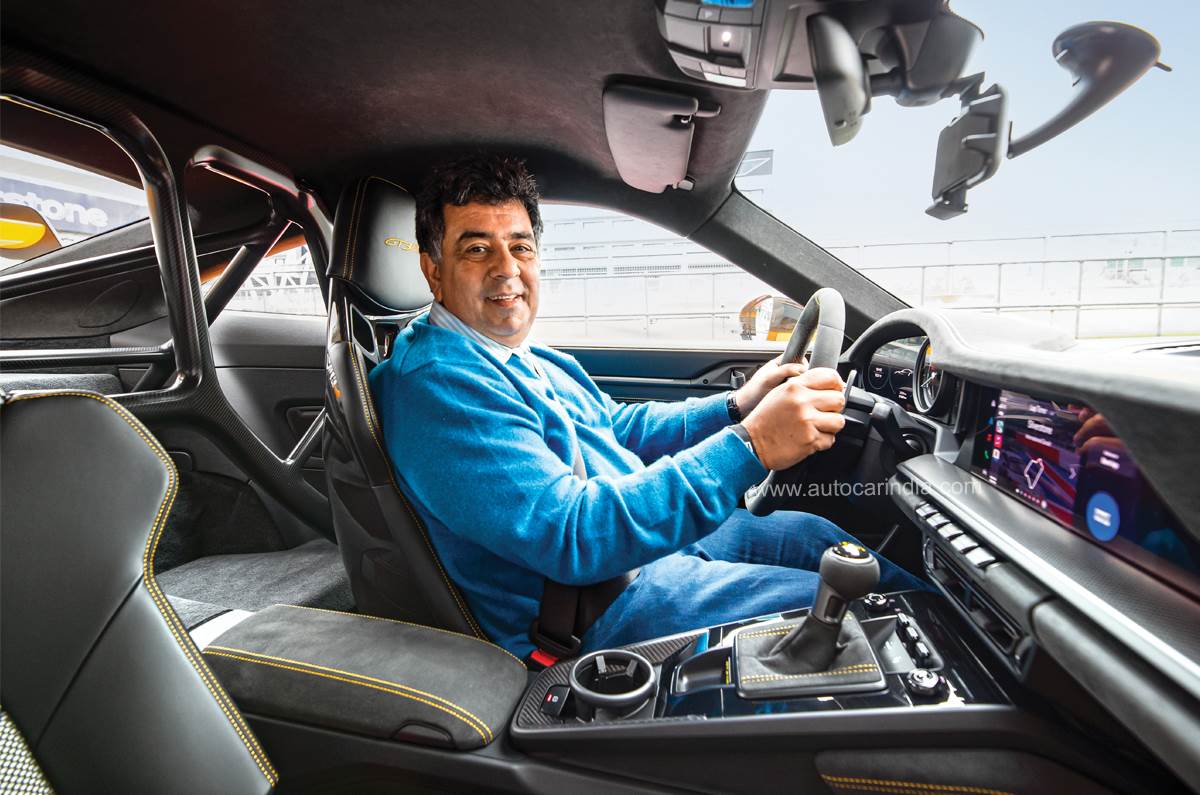 GT3 RS’ undistilled and exhilarating driving experience will leave you smiling for days.

It will bolt to 100kph from rest in 3.2 seconds and hit a max speed of 296kph. However, what defines the new GT3 RS is aerodynamics and Porsche’s laser focus on aero can be seen even in small details like the suspension’s wing-like shaped wishbone arms, which themselves generate 40kg of downforce at Vmax! In fact, every scoop, duct and vent on the 911 GT3 RS’ body isn’t just for show, but to maximise and effectively harness every molecule of wind.

The all-black cabin finished in black leather, black Race-Tex and carbon fibre is typically RS. You have to pay extra for the Weissach Package, which gets carbon fibre garnishing on the mirrors, the massive rear wing, the bonnet and the roof. If you are a track day junkie or want to go racing, you may want to opt for the Clubsport package that comes at no extra cost and includes a steel roll bar, fire extinguishers and a six-point harness. 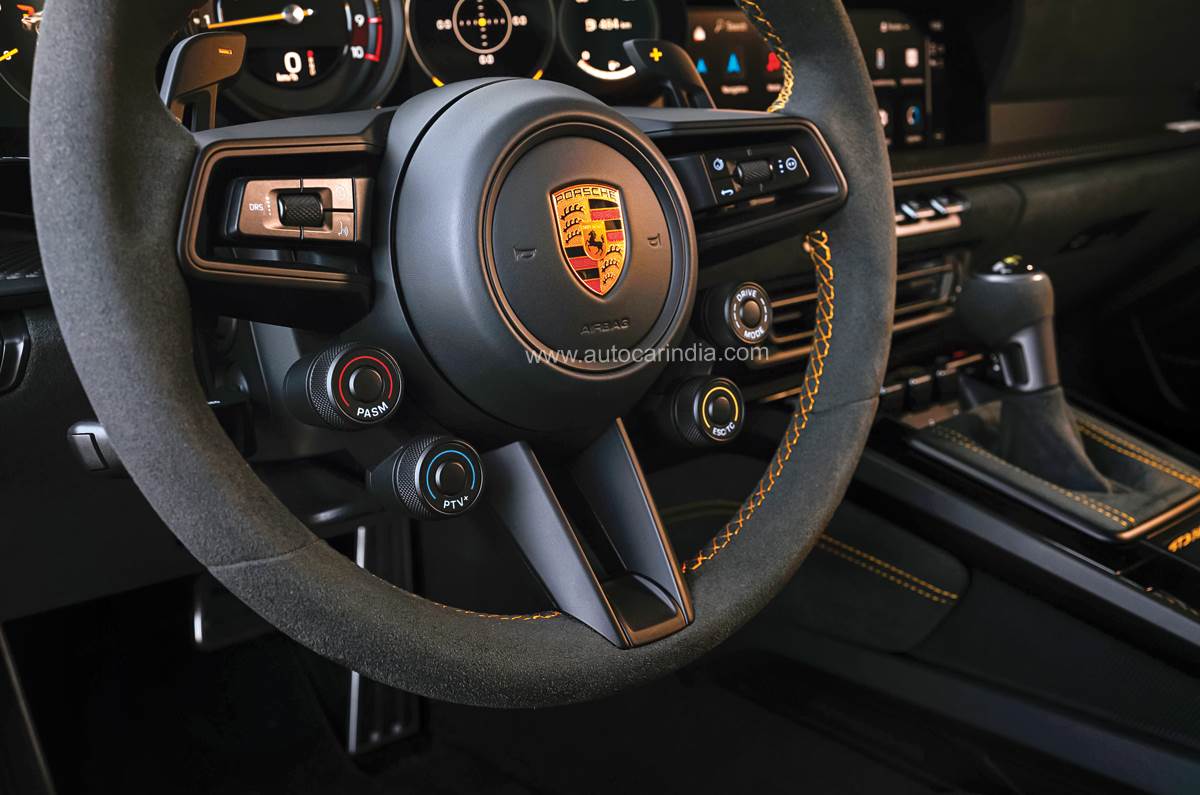 Four buttons on steering wheel leave you lots to play with, including nine levels of traction control.

Settle into the snug carbon-fibre seats and you know you’re in Porsche territory. They have a thin cushion, but all-round support is fantastic so they are comfortable too. And you feel fast just sitting in the deeply contoured bucket. If you want more padding and comfort, you can tick the ‘Sport Seats Plus’ box on the options list at no extra cost. 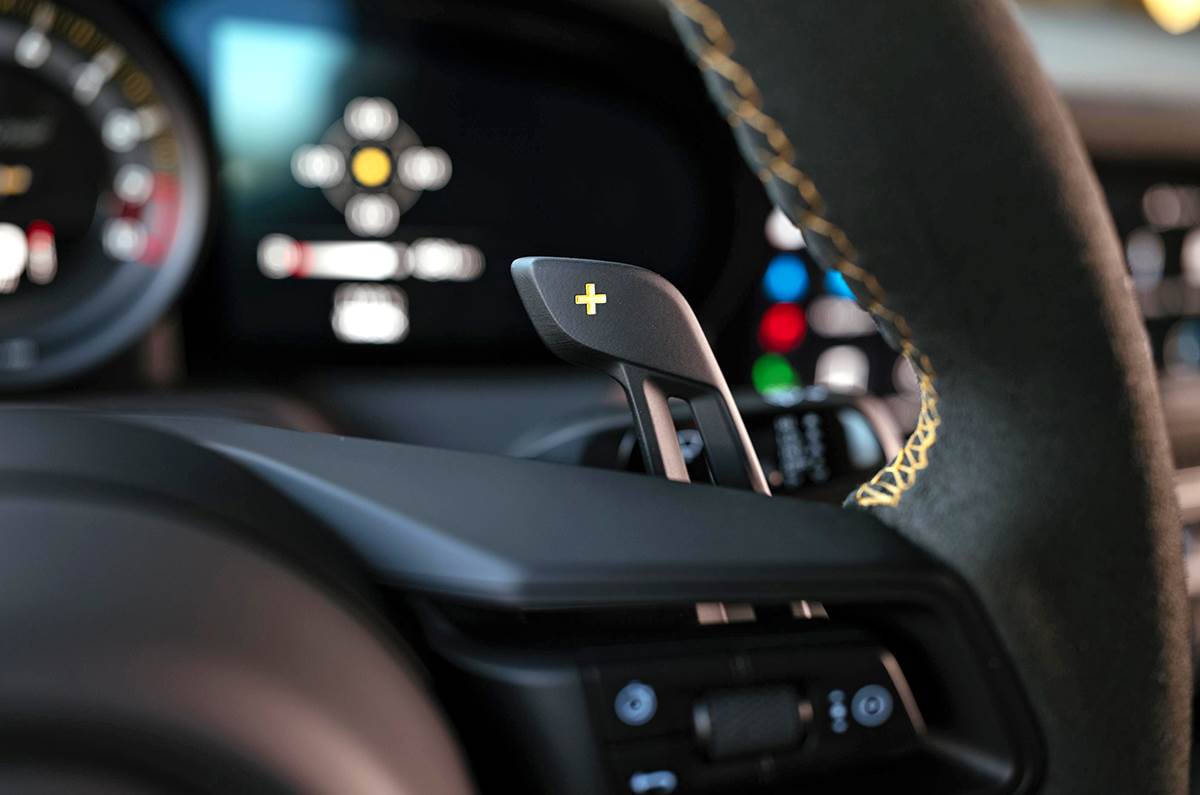 No manual option but you won’t miss it. 7-speed PDK is flawless.

The big tachometer redlines at 9,000rpm, and takes centre stage in the traditional five dial instrument cluster, which is Porsche’s way of saying the engine is king. The steering wheel is again a familiar Porsche design and gets four dials to change myriad functions that can dramatically change the dynamics of the car. There are three driving modes: Normal, Sport and Track, and it’s in the latter that you can change individual settings like the suspension’s bump and rebound and the differential lock rates. This is serious stuff and you need to be a real pro with a race engineer in tow to figure out what are the best combinations for you!

A fleet of 911 GT3 RS’ are lined-up in the pitlane at Silverstone, one of the fastest circuits on the Formula 1 calendar and the home of the British Grand Prix. This ultra fast circuit, with its assortment of high speed corners makes it the ideal venue to the sample the aerodynamic innovations the GT3 RS is bristling with.

Trouble is the typically English weather was far from ideal. A strong and steady drizzle all morning soaked the track, and hence, instead of marvelling at all the high downforce and lateral grip the 911 GT3 RS is capable of, I was slithering around on Michelin Pilot Sport Cup 2 tyres (which don’t exactly like water), testing the car’s traction control system to the max. 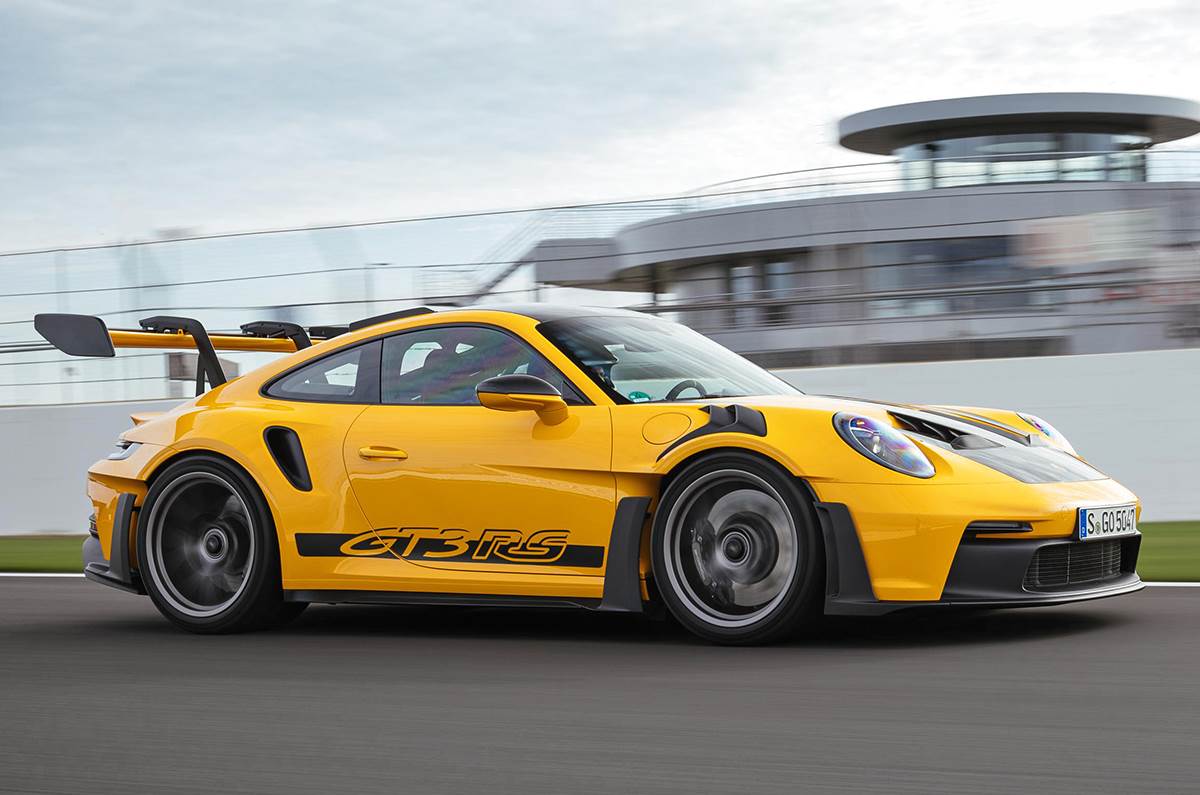 My first four laps in the GT3 RS were spent tip toeing around a drenched Silverstone in Track mode. An aggressive or early squeeze of the throttle pedal would snap the tail sideways, but the electronic minders that came into play ensured I had enough of a safety net. The ESC was firmly on to keep me from spinning wildly. It’s in the rain that you can really test and even enjoy the nine levels of traction control.

To be honest, I was too busy trying to keep up with the pro driver in the pace car to play around with the multiple e-diff, suspension and traction control settings. But I managed to find a nice balance of getting a good amount of sideways action and armfuls of opposite lock to feel like a pro myself. If there’s one thing that the GT3 RS taught me while driving in the wet, it is that this finely honed machine rewards precise driving like no other. 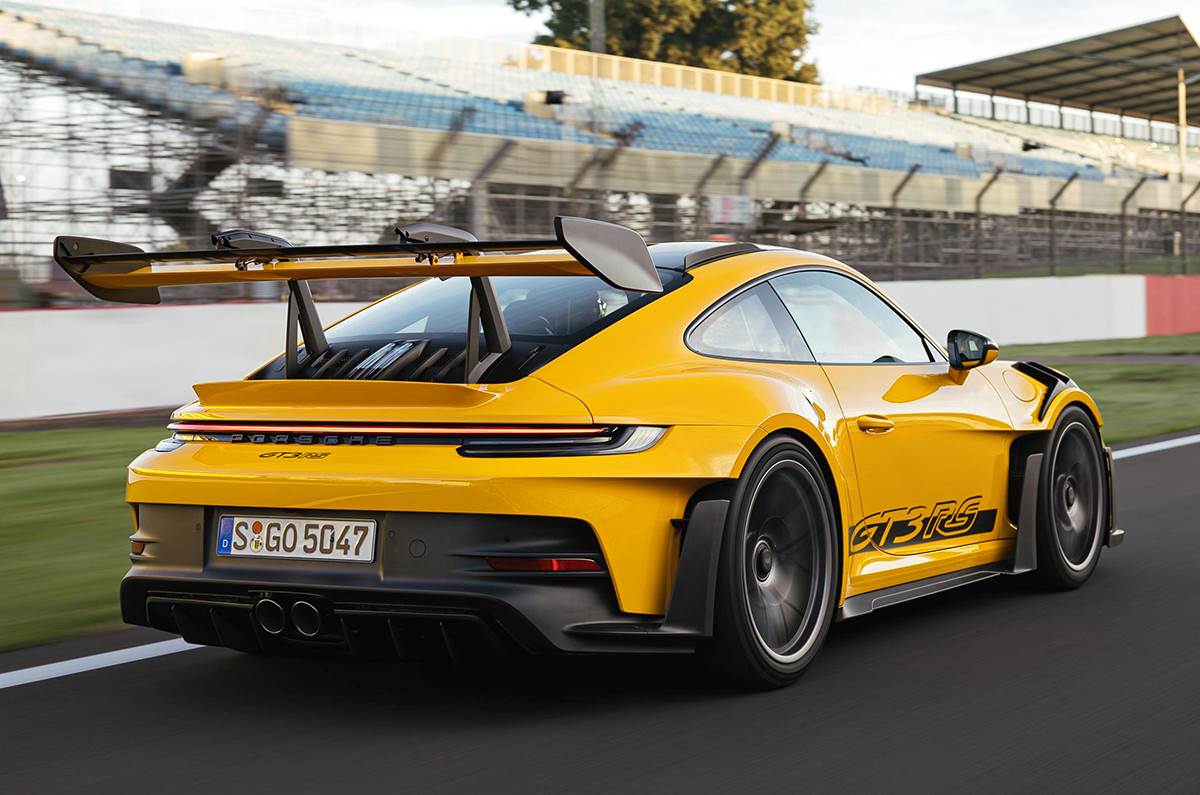 The weather gods bless me with clear skies and bright sunshine for the afternoon stint. By now the track was completely dry to exploit the car’s potential. Within the first few corners, I realised that the car’s potential is way above mine, and that I was merely scratching the surface of what it is capable of. Flying through Silverstone’s long and sweeping corners, the GT3 RS felt super glued to the tarmac. A hard jab of the accelerator would get the tail to shimmy a bit while exiting slower corners, but overall, the grip levels and the brakes are astonishing. 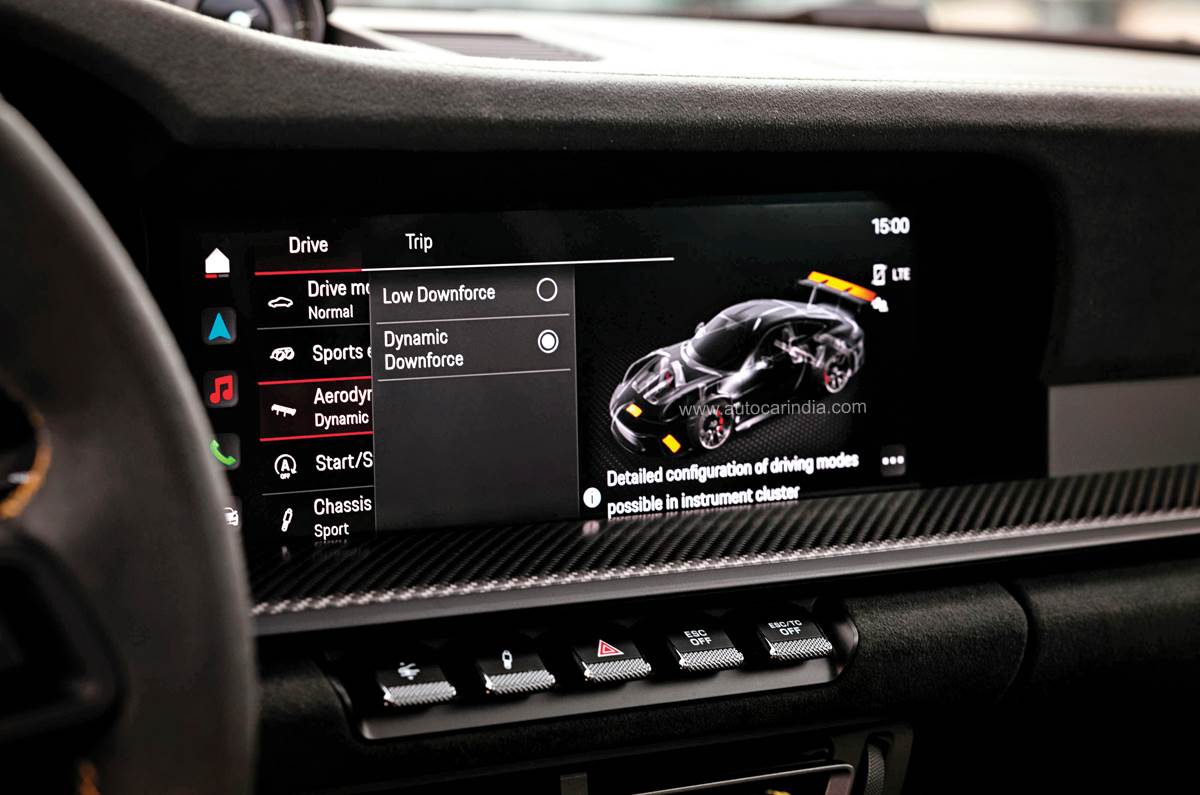 DRS system can be manually or automatically activated.

Through the blindingly fast sweepers like Maggots, Beckets and Abbey, and ultra fast corners like Copse and Stowe, you can feel the active aerodynamics hard at work pressing the body firmly onto the track. With each lap, I gain a little confidence, get on the throttle earlier and on the brakes later, reassured by the confidence with which all four wheels cling to the tarmac. The steering is a surgical tool: razor sharp, quick off centre and responds best to small, precise inputs. You can hit the entry, apex and exit of every corner with an accuracy that will astound you. This car is an incisive track tool with a dynamic capability that will suck the best out of your driving skills. It was impossible to get any sense of how the 911 GT3 RS would feel on public roads, but one can only imagine that the ride would be bone-jarring and the ground clearance too low on most Indian roads.

Whilst the ground breaking aerodynamics defines the new Porsche 911 GT3 RS, the brilliant 4.0-litre, six cylinder engine is what stirs your soul. It’s not the most powerful engine by supercar standards, and doesn’t have the top-end wallop of turbocharged rivals from Ferrari and McLaren, but it revs to a hysterical 9,000rpm, is ultra-responsive, and is strong enough to propel the GT3 RS to a top speed of 296kph. Again, it’s the way you can meter throttle inputs with millimetric precision to squeeze just the right amount of power whilst transitioning through corners. 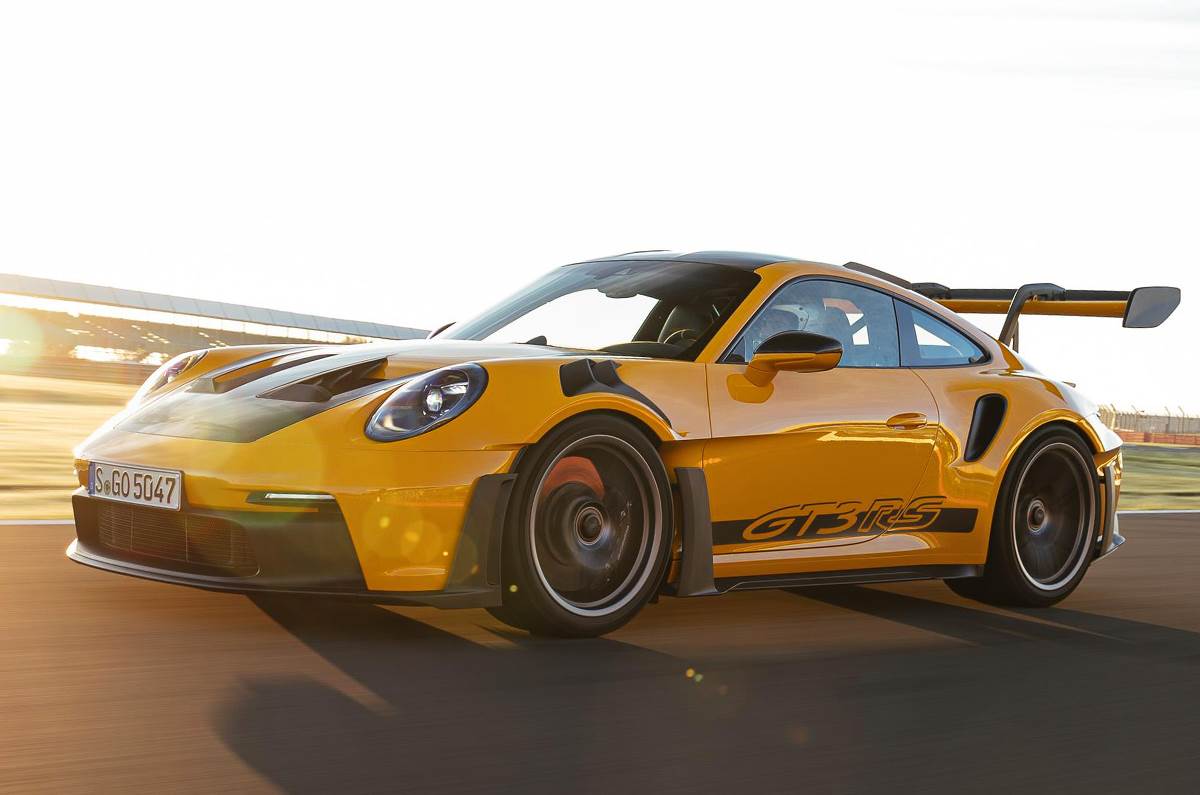 Down the Hangar Straight, with the seven-speed PDK gearbox flawlessly punching through the gears, the GT3 RS hit north of 250kph. This brilliant engine feels stronger after 6,000rpm and charges unrelentingly till the dizzy 9,000rpm redline. The glorious engine note of the flat-six is all the sound you’ll want to hear, and is a heady tribute to one of the last remaining great naturally aspirated engines before electric motors take over. But don’t despair yet because Porsche isn’t giving up without a fight. Every 911 GT3 RS on track was tanked up with synthetic fuel, which is carbon neutral. Make IC engines carbon neutral and there’s no need to kill them, but politicians and policy makers in western countries have decided otherwise.

So if you have Rs 3.25 crore, this is your chance to savour the most seminal experience on four wheels. Just make sure you have the time and inclination to take it to a race track near you.

which in turn does away with the pair of side radiators on either side, the 911’s long standing cooling system layout