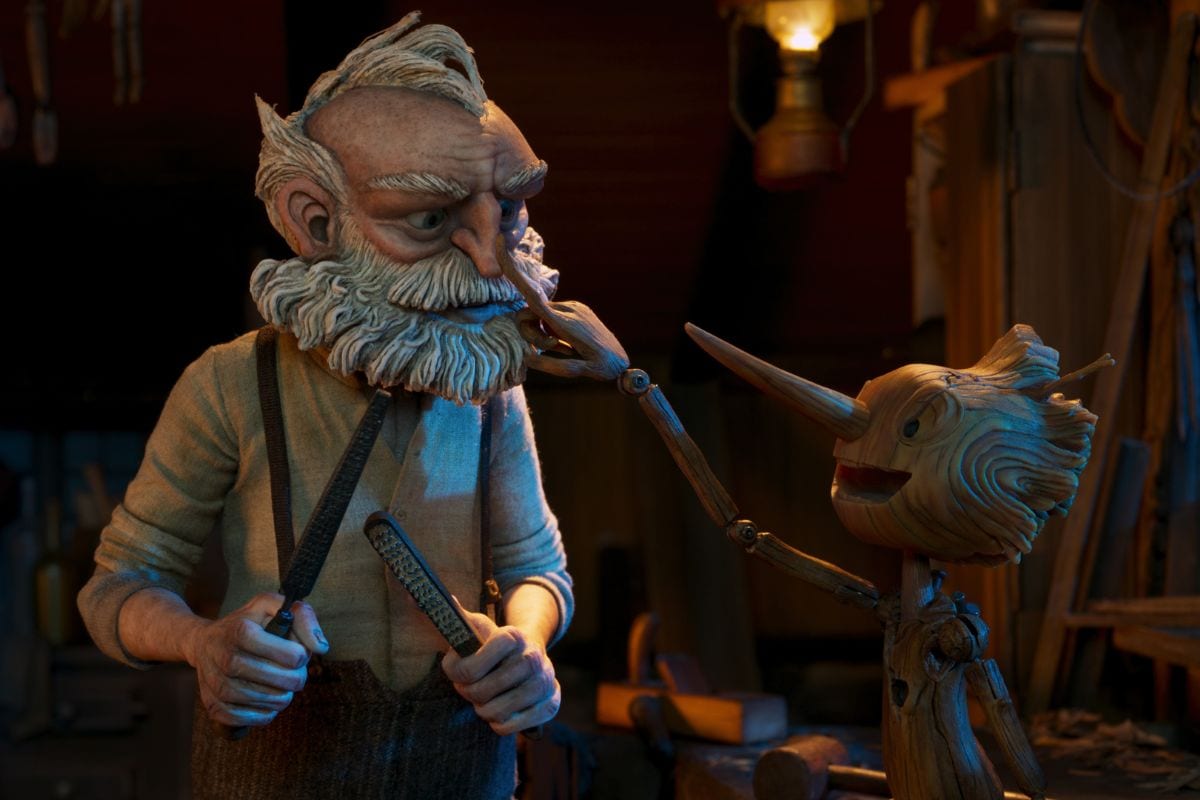 
Guillermo del Toro’s Pinocchio trailer is out. Following a behind-the-scenes featurette during Netflix’s online-only TUDUM event in September, the studio has now dropped a full-length trailer for the upcoming stop-motion animated film. Co-directed by the eponymous Academy Award-winning del Toro and animator Mark Gustafson (Fantastic Mr. Fox), this musical adaptation reimagines the classic fairy tale to add a touch of father-son conflict. The project was announced back in 2018, with Patrick McHale (Adventure Time), attached to co-write the script. Guillermo del Toro’s Pinocchio is out December 9 on Netflix.

Set in the 1930s, during the rise of fascism in Benito Mussolini’s Italy, Guillermo del Toro’s Pinocchio trailer opens with the travelling cricket Sebastian J. Cricket (Ewan McGregor) narrating a familiar children’s story, albeit with a fair warning. “It’s a story you may think you know, but you don’t,” he says, as our favourite wooden puppet boy is brought to life, much to the shock of locals in the town. The premise is a bit different than the original Carlo Collodi story, where the lonely woodcarver Mister Geppetto (David Bradley) is grieving over his dead son Carlo. Having created a wooden son from the trunk of a pine tree, an otherworldly spirit visits his workshop and uses magic to bring the long-nosed puppet to life.

Named Pinocchio (Gregory Mann), the wooden puppet’s personality is far off course from Geppetto’s lost son. This one is rowdy, too curious, and creates havoc along his path, adamant on the thought that he, in fact, is a real boy, trying to blend with onlookers and make new friends and enemies. In Guillermo del Toro’s Pinocchio, the last of it comes in the form of fiendish ringmaster Count Volpe (Christoph Waltz), who lures the boy to his carnival crew, turning the talking puppet into a star attraction. In this version, Volpe is an amalgamation of the cunning anthropomorphic Fox and the Cat from the original story — so it’s three villains fused into one. That said, Volpe bears some of the characteristic features of the animals, featuring wing-like sideburns.

The Guillermo del Toro’s Pinocchio trailer also shows Gepetto handing over a school book to Pinocchio, which presumably gets sold in exchange for a ticket to the aforementioned carnival. Despite his mischievous acts, Gepetto seems to love Pinocchio as his own son while regularly disciplining him, something that the young boy mistakes for hatred. “You tell him I love him,” Pinocchio tells Cricket, leaving the house one night. “And I won’t be a burden anymore.” In his whimsical journey, Pinocchio is poised to end up in a fascist training camp, meet Mussolini himself, and the Wood Sprite (Tilda Swinton), the Sphinx-like personification of Death.

The Netflix animated film also stars Finn Wolfhard (Stranger Things) as bully Candlewick, Ron Perlman (Drive) as father Podestà, Cate Blanchett (Tár) as Volpe’s mistreated monkey assistant Spazzatura, and Burn Gorman (Enola Holmes) as The Priest, Geppetto’s former client. “To me, it was important to show a world in which everybody behaves like a puppet and only the puppet chooses to be disobedient,” co-director del Toro said in a prepared statement, explaining his twist on the classic tale. “He then finds his own morality, his own soul, and his own humanity.”

Guillermo del Toro’s Pinocchio is out December 9 on Netflix.