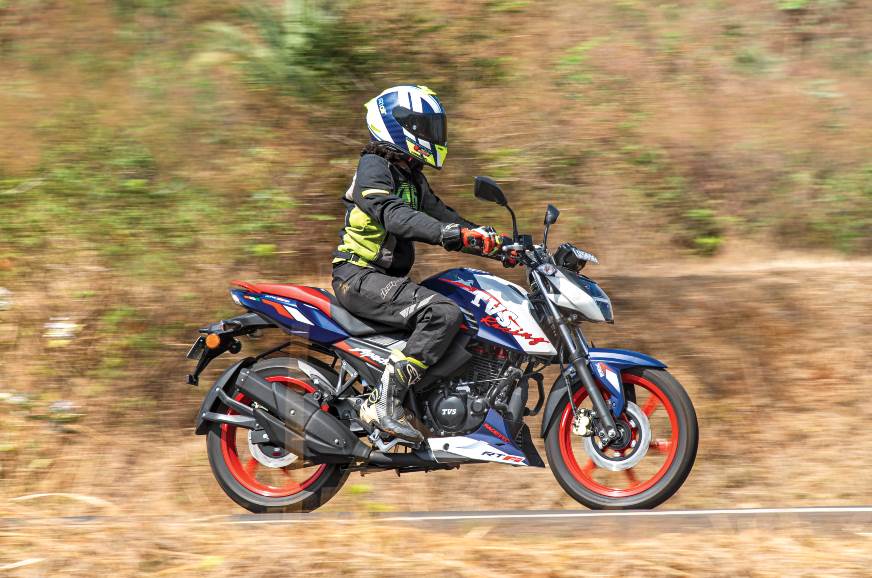 Why has TVS launched a 165cc motorcycle that costs over Rs 20,000 more than its already very capable 160cc bike? We find out.

TVS races in the 165cc Pro Stock category at the Indian National Motorcycle Racing Championship (INMRC), and to comply with the rules of this class, the team has to use an appropriate engine from one of its road bikes. In this case, that is the 160cc unit from its Apache RTR 160 4V. Of course, this engine is heavily modified for race use, but the one thing that cannot change too much is the cubic capacity. This leaves an extra 5cc that TVS could use, but is unable to, because it doesn’t have a 165cc road bike.

So, along comes the TVS Apache RTR 165 RP. The company has built 200 of these to allow it to homologate the engine for use in next year’s national championship. It costs Rs 1.45 lakh, which is over Rs 20,000 more expensive than the costliest RTR 160 4V! But that’s pretty irrelevant, because all 200 are already sold out, meaning it’s impossible for most people to find out first-hand just what this bike is like. But over the next few pages, I hope to give you a fair idea.

Unsurprisingly, this bike’s displacement is a neat 164.9cc. But this isn’t just a simple boring and stroking job from TVS – there are also significant changes to the cylinder head, with larger valves and ports, and different cam profiles. The piston is also different from the 160, not just in the sense that it’s larger, but also in its shape. The end result is a power figure of 19.2hp, which is considerably higher than the 160’s 17.5hp. Torque, though, is actually slightly lower, at 14.2Nm, compared to the 160’s 14.73Nm. What’s telling is the fact that the RP makes its peak figures a good deal higher up the rev range than the RTR 160 4V.

This translates into a far racier motor, with much more to be gained by holding gears and revving the engine out. Despite this, TVS has impressively managed to retain much of the tractable nature customers would expect in a bike from this segment and it does a good job of carrying you around at low RPMs in the city. But the real joy is in surfing the surge of power that arrives around 6,000rpm and carries you till a little past 9,000rpm. It makes for a very enjoyable (and quick) ride, all the more so because the RP’s throttle response is nice and crisp, without being too sharp or snatchy.

You don’t get any riding modes like you do on the 1604V – it’s all the power, all the time. More power than even something like the liquid-cooled, VVA-equipped R15 V4. In terms of actual acceleration figures, our tests show that the RP is exactly on par with the R15 up to 70kph, after which the Yamaha edges ahead – perhaps due to its additional sixth gear and the aerodynamic advantage of its full fairing. Either way, this RTR can more or less match the best performance this segment has to offer.

The RTR 160’s engine isknown for legendary refinement levels, and this 165cc motor is quite smooth in its own right, remaining largely vibration-free through most of the rev range.

But once you cross 7,000rpm, you do have a slight buzz that creeps into the bars and foot pegs. Nevertheless, for all its extra performance, the engine still throws up some pretty respectable fuel efficiency figures – 47.4kpl in the city and 56.3kpl on the highway.

Despite this bike’s sportier intent, the RP hasn’t sacrificed in the area of comfort. Youstill get excellent ride quality from the well-tuned Showa suspension – most smaller bumps are quite easily gobbled up, and even over larger undulations, the RP never loses composure. The riding position is also unchanged, meaning that it’s fairly upright and relaxed, but also a little cramped for your legs, with a relatively small seat-to-foot peg distance.

So you will find yourself wanting to flex your knees and stretch your legs every now and then, especially if you’re on the taller side.

The handling story is quite similar to the RTR 160 4V as well, meaning that this is a rather nimble and agile motorcycle and feels sharp when slicing through fast moving traffic. But when you start pushing hard in the twisties, in typical Apache fashion, it does feel edgy and reactive at high lean angles. Hence, it will take a pair of experienced hands to get the most out of this chassis.

Also, like the standard 160 4V, braking feel has room for improvement. Even though this bike managed to stop reasonably quickly in our performance tests, it did require quite a large handful of front brake. A little more bite and feel at the lever would’ve been welcome on a bike that otherwise feels quite sharp.

Despite that sharpness, the RP remains perfectly easy to ride on a regular basis, with no real adjustment required on your part. It is marginally heavier (2kg) than the bike it’s based on, but you don’t really feel this from the saddle, and the RP comes across as a very manageable motorcycle. And like most products from the TVS stable, it feels thoroughly engineered.

If you are one of the lucky 200 that’s bought one, you’ll have no trouble letting the world know. Because while it may share its design with the 160 4V, the RP gets a unique colour and graphics scheme, and a rather loud one at that. The red, white and blue combo is one that’s hard to go wrong with, and it’s executed quite well on this bike, with a neat matte finish. Great to look at, but tricky to keep clean. What would’ve sealed the deal, though, is if TVS had given these 200 bikes a special numbered plaque to really drive home the uniqueness and exclusivity. 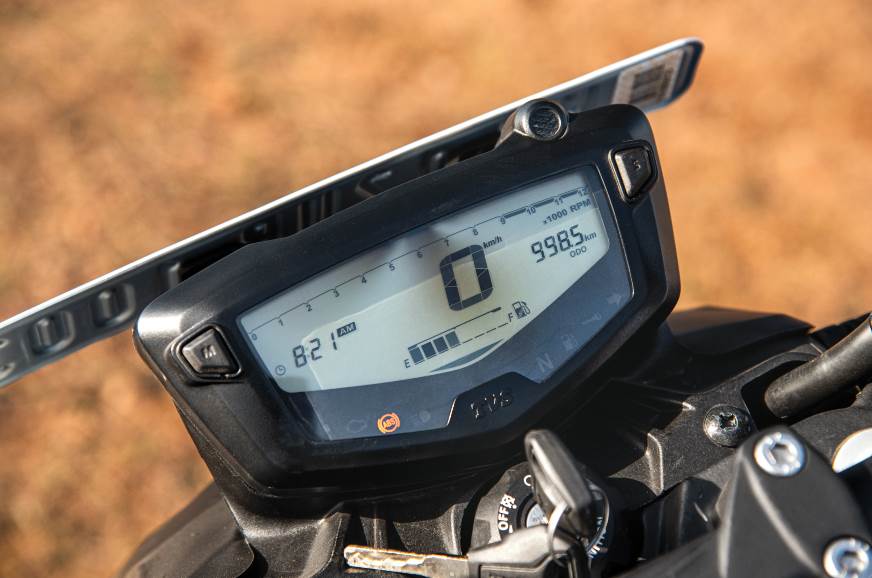 The features department is probably this bike’s biggest shortcoming, because, despite its premium price, the RP misses out on the 160 4V’s Bluetooth connectivity, riding modes, a gear position indicator and glide through technology. Another reminder of its racing connect is the fact that there is no side-stand engine cut-off or even indicator. What it does get is a fully digital instrumentation, neat adjustable levers, a slipper clutch and an excellent LED headlight.

With this bike completely sold out for the moment, there’s little point in telling you about how its pros weigh up against its cons, or whether it’s worth its asking price. Although I believe it is, simply because of how cool it is to own a rare machine like this that actually has big performance gains to offer. 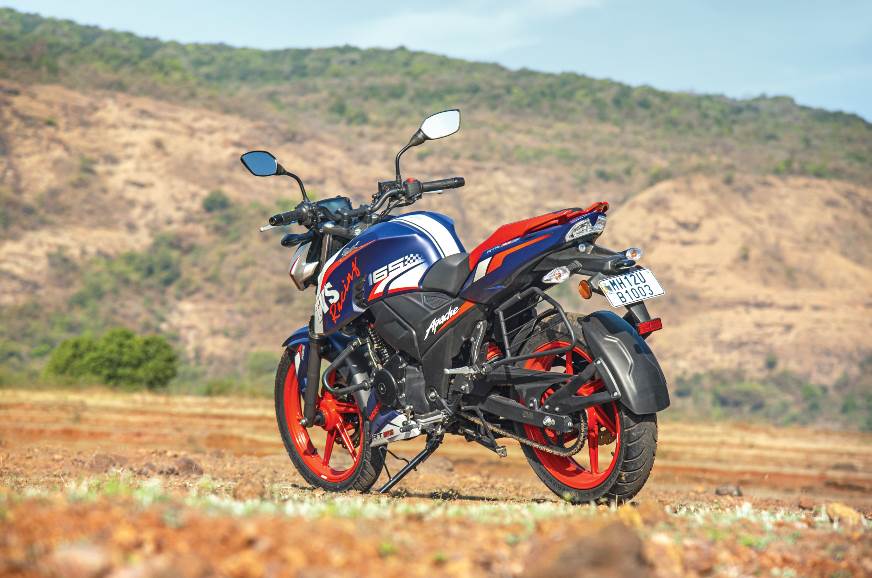 What this bike is is a display of TVS’ commitment to continue to dominate the INMRC – I can’t recall any Indian bike maker manufacturing a homologation special to aid its racing operation. But TVS has built a reputation for doing things a little differently, and it almost always works out excellently for the manufacturer and buyer alike. So kudos to TVS for this bike. The fact that a few happy road users get to benefit from a fun new homologation special motorcycle without any compromises in how it rides is an absolute win-win.