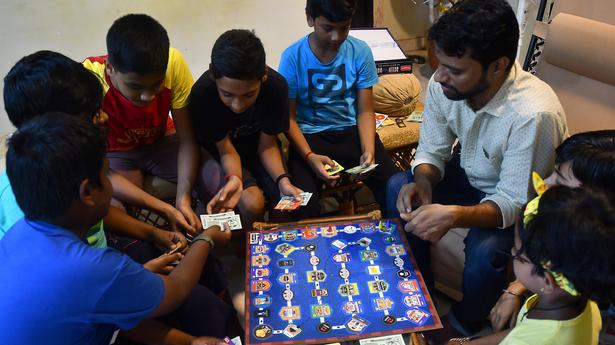 Santhosh Kumar Subramanian ’s latest game fuses food and business skills. The developer from Chennai talks about how board games can be fun and educational

Kids make the most brutal critics, finds Santhosh Kumar Subramanian. The Chennai-based game maker has been getting his board games vetted by a demanding brigade of seven to 12 year olds. “They are blatant; they tell you what is good or rip the game apart if it does not interest them. Or, they just say they are bored and stop playing,” laughs Santhosh, admitting that he has often had to tweak games, sometimes a good six or seven times to get them approved by the young critics.

Santhosh started Bambaram Toys and Games in 2010 as a toy lending library before the team began creating games themselves. His latest launch Belly Battle — a trading game where players buy restaurants — has kids coming up with names for restaurants. “Murakami sushi, Chole Bhavan, Burgerer, Osteria, Akira Ramen to name a few,“ lists out Santhosh, adding that some of the nicest ideas came from the young players.

In Belly Battle, players try to build a restaurant empire in a town named St Cheeseburger. Each of them gets to buy a restaurant which serves a particular cuisine, from the local restaurant mogul, Munchwalla. The game features interesting quirks such as haunted restaurants and celebrity diners, which determine a “munch fee” or its exemption. “The game continues until one of the players is bankrupt. It covers basic financial literacy where kids understand about assets and liquid cash. They understand that they cannot blindly keep buying restaurants,” explains Santhosh.

Santhosh also designs serious games for corporates. “Through these, we break down a complex subject so it can be easily understood. For one of the banks we created a game that explained cash profitability in a simplified way,” he says. In the recent past, he created a physical game for women in Rajasthan to explain OTP security and why it is important. “This was not a table-top game and the players had to physically move and run around and execute every step,” says Santhosh, adding “Games have great potential to help in development; there is more to them than just Scrabble and Monopoly.”