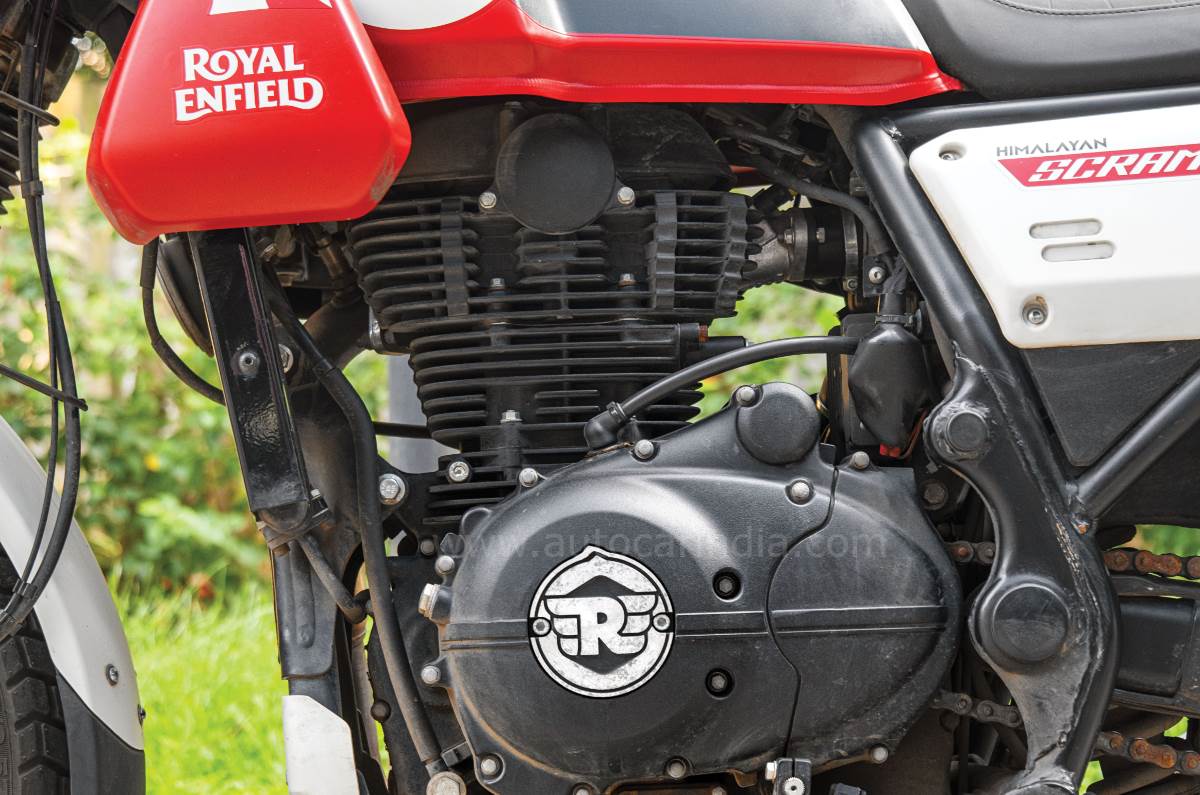 The Scram finally gets a chance to get out of the city and stretch its legs on an open highway.

Life, some say, can take you by surprise on a few occasions. There are times when you simply can’t understand how you’ve come to like something that never appealed to you. Case in point is the lovely BS6 motor that does duty in our Royal Enfield Scram 411 long-termer. You see, for someone like me who loves quick-revving, triple-digit-horsepower-producing motorcycles, and owns the bonkers KTM 790 Duke, the Scram 411 has become an antithesis of sorts. And I had this epiphany while riding the bike from Pune to Mumbai, on a rainy night, at an unearthly hour.

With the speedo hovering at a steady 80-90kph, the engine settled to a rhythmic beat as the miles kept accruing on the odometer. The suspension was doing a fine job of gobbling most of the potholes on the NH4, I was seated comfortably, and by the time I reached home, there was a feeling of contentment in my heart. It’s one of those rides that remain firmly etched in the brain, only because you enjoyed riding the motorcycle. 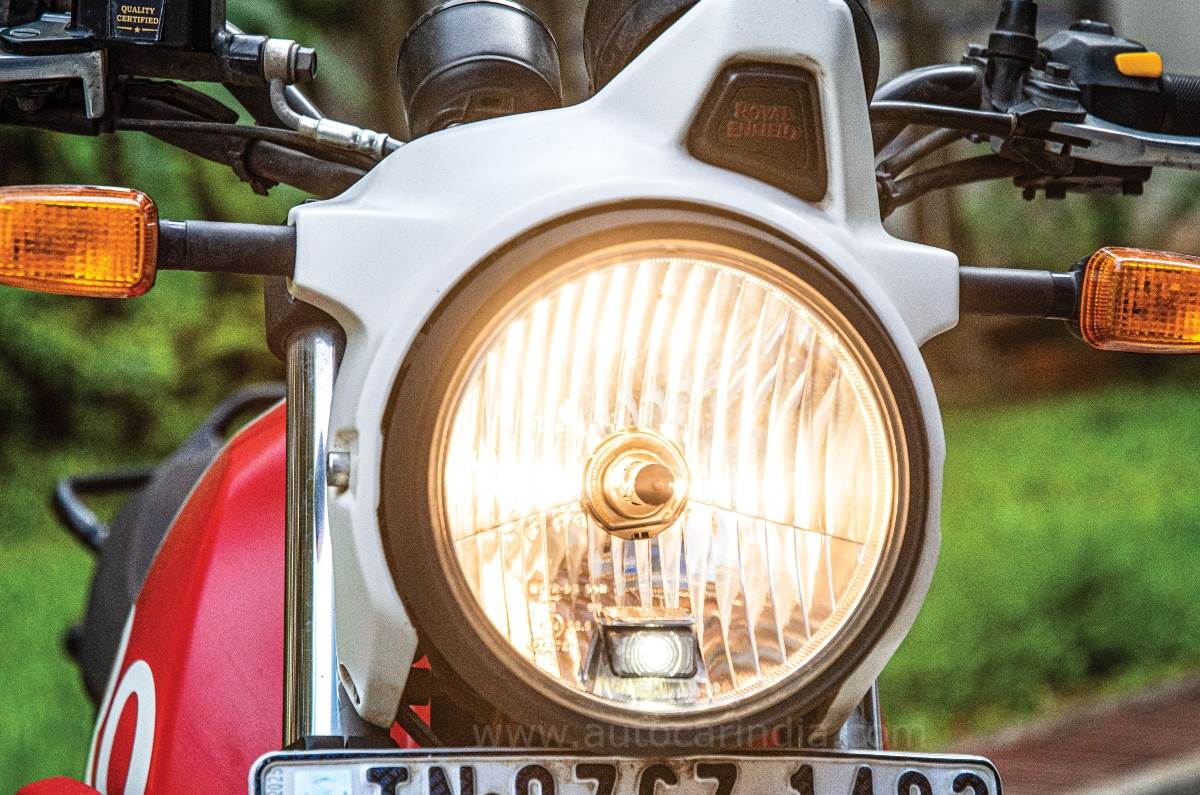 In hindsight, I was also quite happy about the fact the Scram got a chance to stretch its legs after battling insane Mumbai traffic, week after week. What also made that highway ride a pleasurable experience was the fact that the motorcycle had just been serviced a couple of weeks prior. The first service included an oil/ filter change, chain adjustment and a meticulous check of every nut and bolt. Total cost? Rs 1,165 and there’s no labour charge involved as it is a free service. The effect of the first service was a bike that rides well and an engine that feels smoother than when it was new.

Besides that, and a couple of other Mumbai-Pune-Mumbai runs, the Scram 411 has been doing duty as my daily commuter for the most part, without any issues. As for my plans to finally wet my feet in the world of off-road riding with the Scram as my ride? Well, they haven’t materialised, yet. 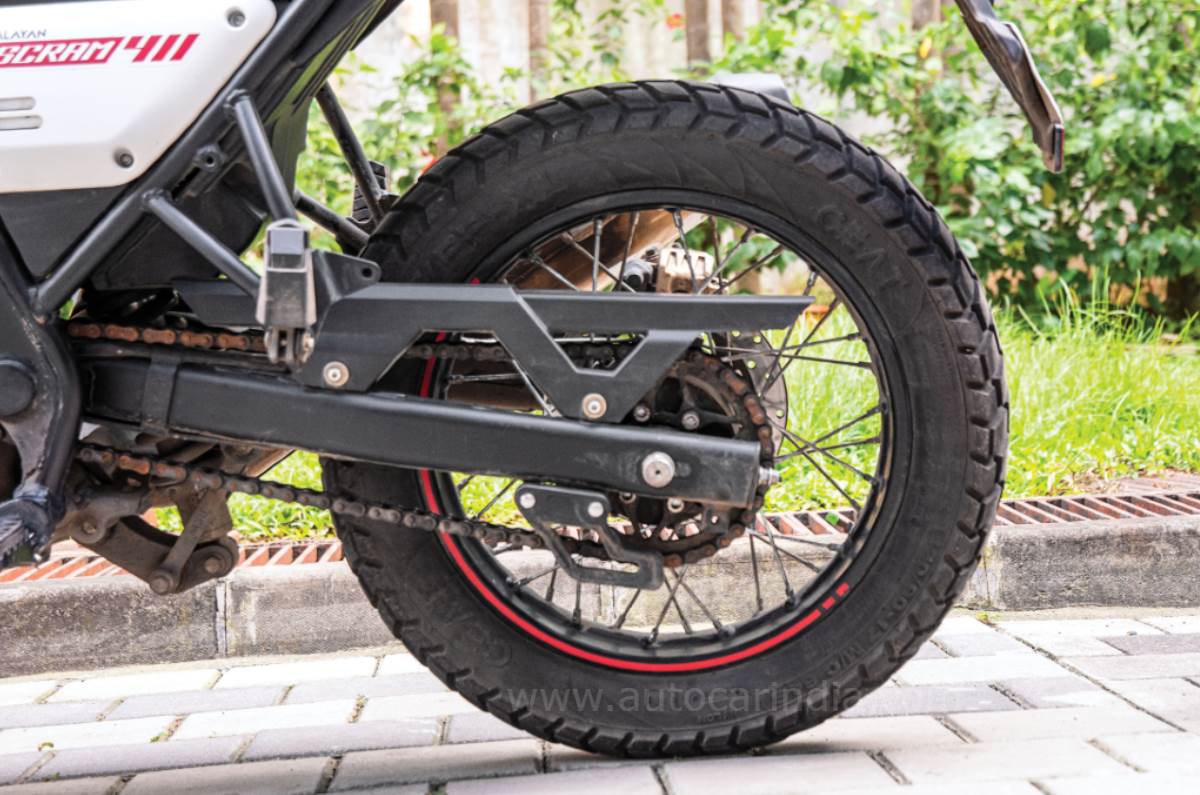 Two punctures in the rear tyre required us to change the tube.

In between the times I spent testing other motorcycles, Soham took over the reins of the Scram and logged a fair amount of miles. During one of his daily commutes, the Scram’s rear tyre, unfortunately, picked up a couple of punctures. On a bike with tubeless tyres, this wouldn’t have been a major issue, but the Scram runs on tube-type tyres and the poor guy was forced to stop by the side of the road with a flat. Luckily, for him, a tyre repair shop was less than a kilometre away and he decided to ride the bike at a slow pace to get there. Fixing the puncture on a non-tubeless tyre is a tedious affair and the entire process of dismounting the wheel and tyre was cumbersome. Close inspection of the tube inside revealed multiple holes caused by two nails that had lodged themselves in between the tread.  After taking the nails out, inserting a new tube and parting with Rs 500 (including labour!), Soham was back on the road. 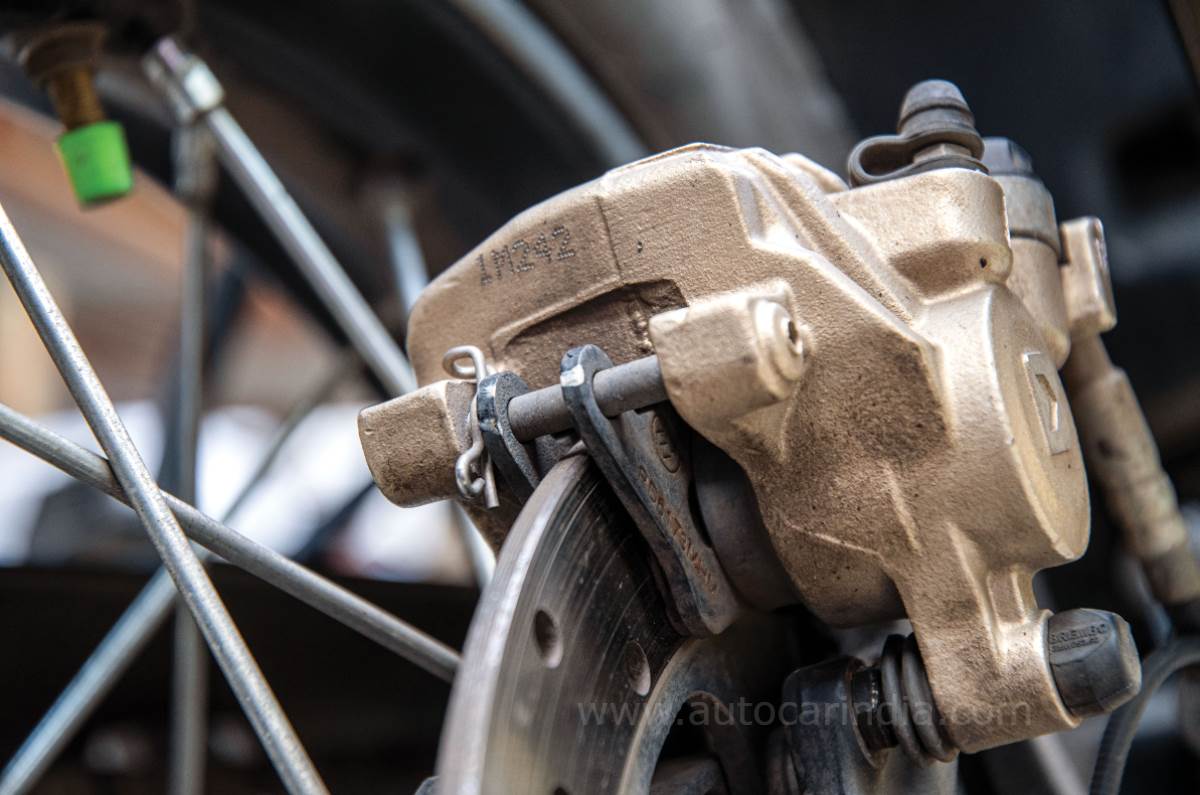 Rear brake pad, surprisingly, is at the end of its life within 4,000km.

That incident got me thinking of experimenting with some sort of tube-type tyre sealant gel and saving us this kind of misery in the future. In fact, as the youngest member of our team, Dinshaw Magol, takes charge of the Scram from next month onwards, it’s the first thing that I’ll request him to do. We’ll also get Royal Enfield to change the rear brake pads that have worn out much sooner than we’d expected. More on that later.