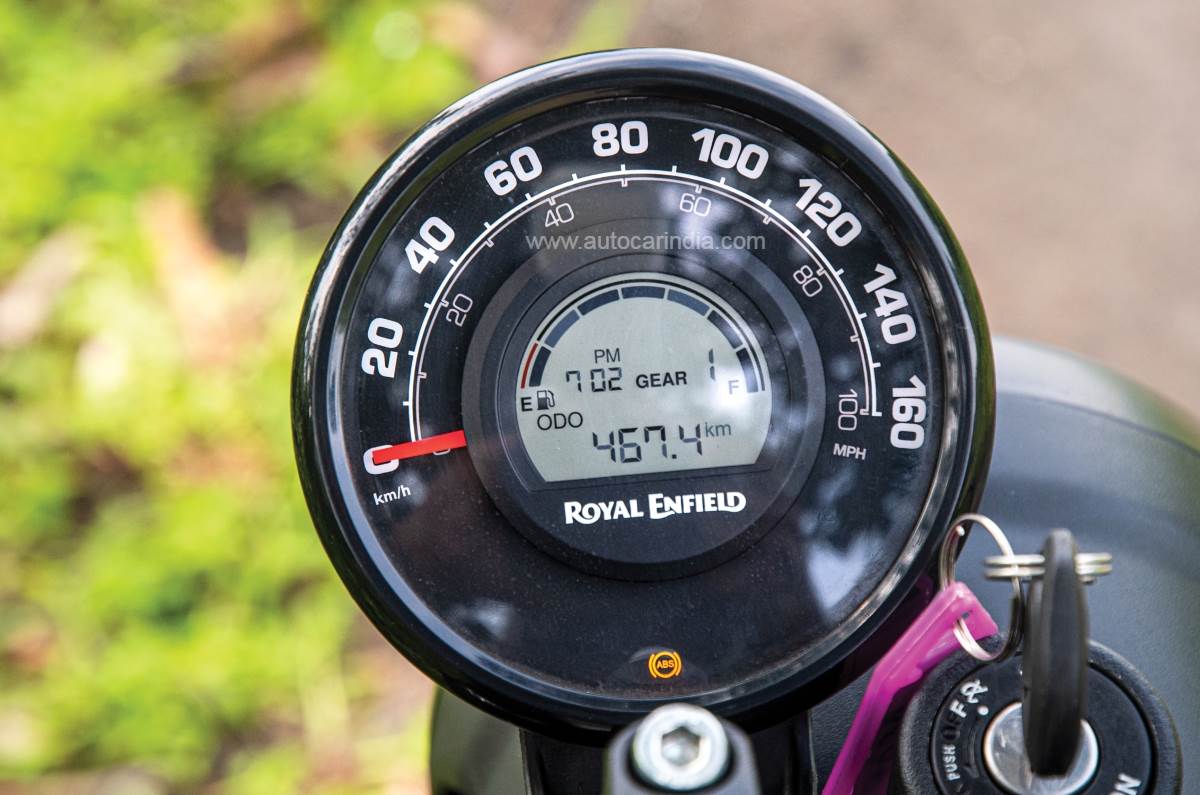 The new Hunter 350 has a big job on its hands, which is to broaden Royal Enfield’s customer base and attract a wider audience to the brand. And at first glance, it seems like the Hunter 350 is just the right tool for the job. It’s got the classic British roadster design and is available in many colour schemes, it’s powered by RE’s smooth and torquey 350cc J-series engine and it has a very attractive starting price of Rs 1.50 lakh (ex-showroom). On paper then, it appears to be rather compelling but only a full road test out in the real world will determine just what the Hunter 350 is all about. Read on to find out.

The Hunter 350 is styled to look like your typical retro roadster, and it does look quite nice. It gets a round halogen headlamp, teardrop-shaped fuel tank, a flat seat, a small side panel with the Hunter 350 branding and a neat tail section with a round tail-lamp. Many will appreciate the Hunter for its simplistic styling. The model we’ve tested is the higher Metro variant in the Dapper Ash colour scheme, which we think suits this motorcycle particularly well. There’s also the entry-level Retro variant on offer, which gets simpler paint schemes and wire spoke wheels. In terms of quality, we found the paint finish and the switchgear on the Hunter to be good, especially considering the price point.

However, an area where the Hunter does fall a bit short is equipment levels, as something like a TVS Ronin is better equipped at a similar price. The Metro variant gets 17-inch alloys, a USB charging port, two trip meters, dual-channel ABS, an optional Tripper navigation pod, hazard lights and an LED tail-lamp. The base Retro variant is even more sparsely equipped, featuring a simpler instrument cluster, single-channel ABS with a rear drum brake, slimmer tyres, a halogen tail-light, rectangular indicators and a tubular grab rail.

But as is the case with modern Royal Enfields, there’s a whole host of accessories to choose from for the Hunter 350. Buyers have the opportunity to customise their Hunter 350 as they please, with the accessories catalogue including bar-end mirrors, LED indicators, passenger backrests, windscreens, engine guards, luggage, seats and even a tail tidy, which is a first for the brand.

The new Hunter 350 seats you like no other J-platform model, as the pegs are a bit rear set and there’s a slight reach to the handlebar. But overall, it can be described as a comfortable riding position with a hint of sportiness. Tall riders will find it spacious enough, but the relatively low 790mm seat also means that it will comfortably fit shorter riders. However, it is quite a compact bike by RE standards, and it isn’t as comfortable for pillions, as the seat is not particularly large, and the grab handles are positioned awkwardly.

On the move, the Hunter 350 feels light on its feet, which doesn’t come as a surprise, given that it’s lost 14kg over the Classic 350 with which it shares its platform. Furthermore, the changes RE made to the chassis also play a role, given that the Hunter still isn’t exactly light, at 181kg. The 20mm shorter wheelbase than the Classic, the 17-inch wheels and the wide handlebar, all help in making the Hunter 350 feel like the agile machine that it is. As such, the Hunter 350 feels completely at home in city confines. The Hunter is quite enjoyable around bends too, as it turns in quickly without much effort and has a good grip. Furthermore, the motorcycle is predictable and stable in the corners, which will be confidence-inspiring for newer riders in this segment that RE is courting. 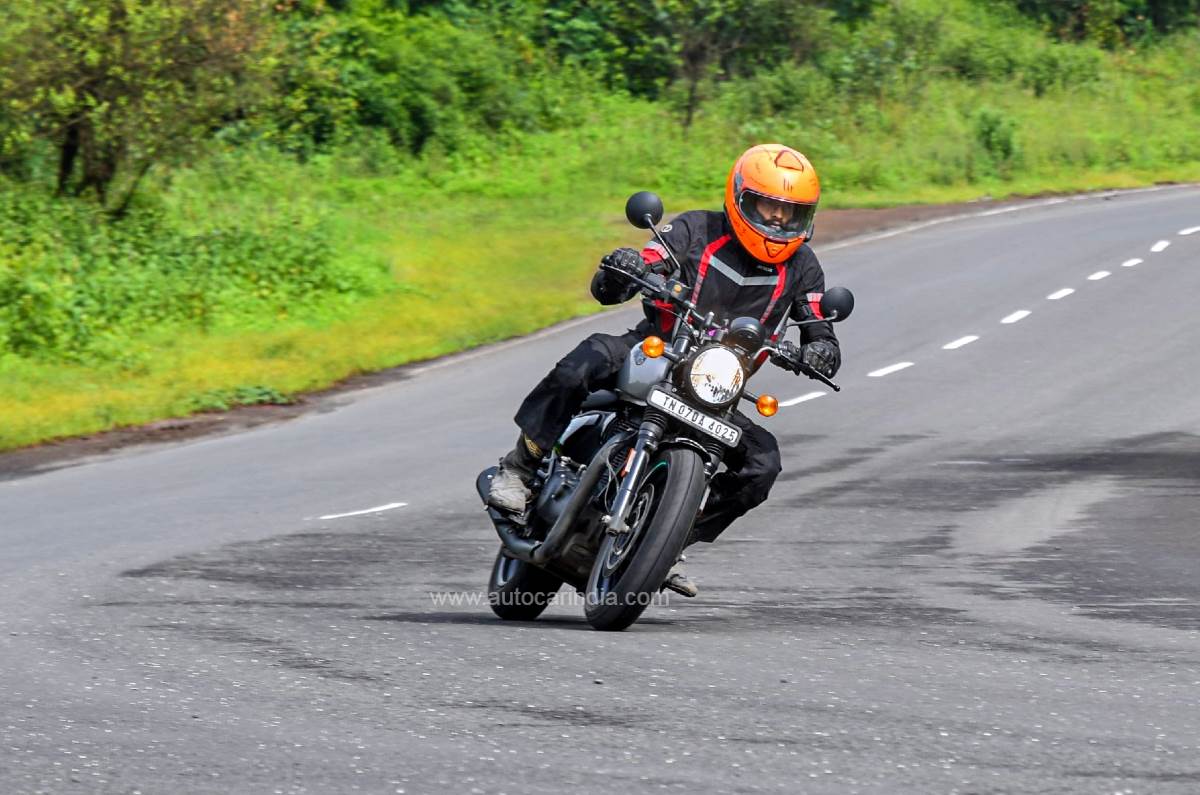 The Hunter feels agile and light on its feet.

However, the ride quality of the Hunter 350 is a mixed bag. Suspension duties on the motorcycles are handled by a 41mm telescopic fork up front and preload-adjustable twin shocks at the rear, but it isn’t the hardware that’s the issue, it’s the set-up. While the front end feels nice and absorbent, the rear feels unusually stiff. It can feel quite uncomfortable going over a broken patch of road and uneven expansion joints, be it at slow or high speeds.

In terms of the brakes, the Hunter 350 Metro with the discs at both ends and dual-channel ABS has adequate stopping power, but it could have done with a bit more feel at the lever. In our test, the Hunter managed to come to a dead stop from 60kph in 16.18m. The Hunter 350’s ground clearance of 150mm also seems rather low but, we didn’t face any issues with the belly scraping on speed bumps.

Being a J-series model, the Hunter 350 gets the same 349cc, single-cylinder engine that powers the Classic and Meteor 350s. It puts out 20hp and 27Nm, which is adequate for a bike of this size, and comes paired with a 5-speed gearbox. RE says it has changed the engine’s mapping to suit the Hunter’s characteristics better and thus it does feel a bit more responsive than on the other two. The engine itself is a smooth and torquey unit that we’ve really grown to like. It has good low-end pull, it rarely feels stressed and on this Hunter, has a nice raspy tone. 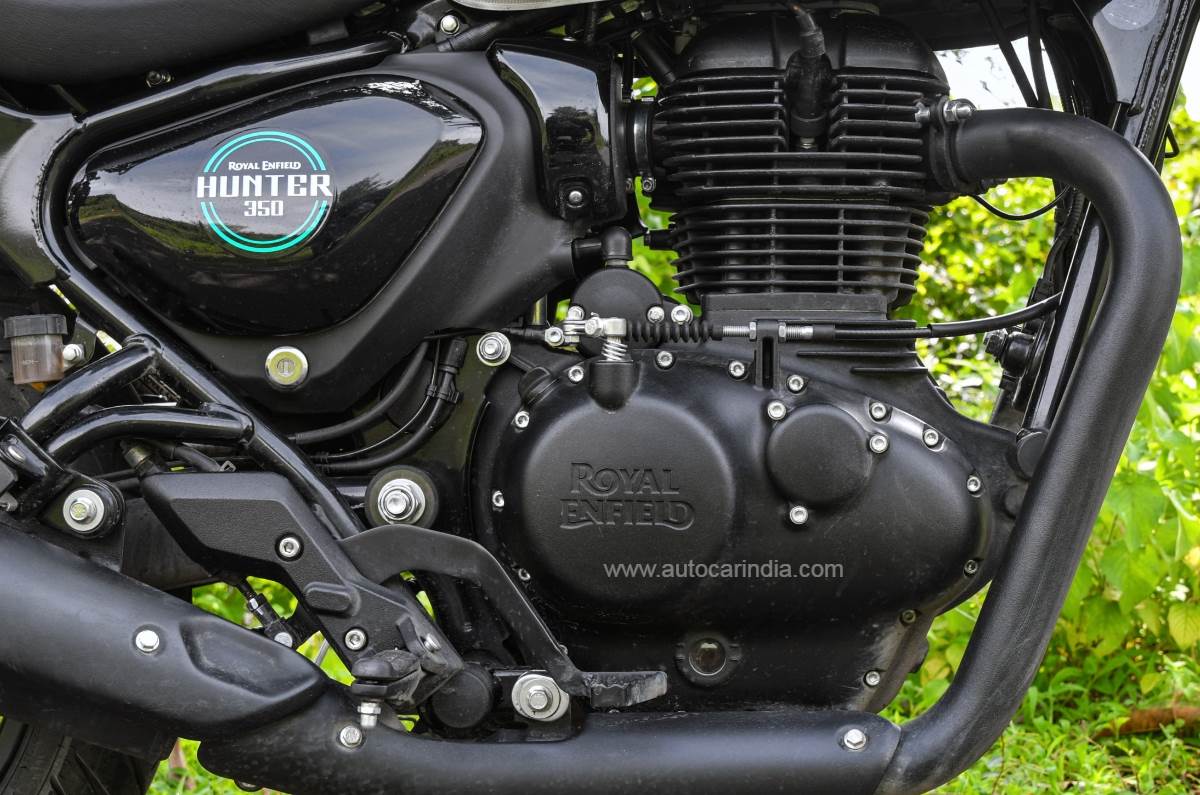 The Hunter 350 does 0-60kph in 4.95sec, which is faster than the Meteor and the Classic, and it’s quicker in gear too, but that isn’t really what it’s about. The Hunter likes to be ridden in a relaxed manner and feels comfortable cruising at triple-digit speeds. However, the clutch lever feels too heavy, even heavier than on the Classic and Meteor, and it can get painful while commuting in peak hour traffic.

In our fuel-efficiency test, the Hunter 350 returned 30.61kpl in the city, which is actually a bit lower than what the figures we got from its J-platform siblings. However, the Hunter makes up for that by being superior in terms of highway fuel efficiency, which is 39.84kpl and higher than both the Classic and Meteor.

Some existing RE owners may still prefer the larger and slower Classic and Meteor, but I don’t think the Hunter 350 was designed for them anyway. The Hunter is meant for buyers who want to enter the Royal Enfield fold and don’t want a motorcycle that’s intimidating or cumbersome to ride. 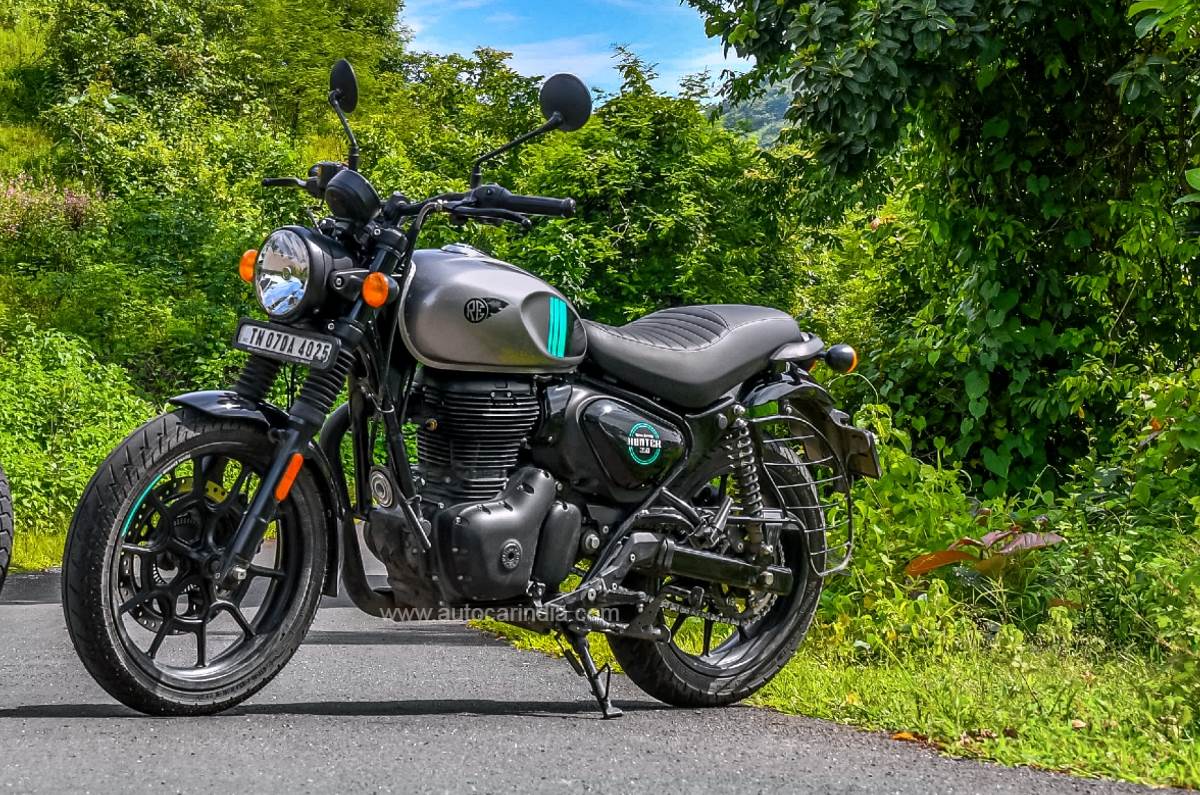 The RE Hunter 350 offers great value for money.

Priced from Rs 1.50 lakh-1.69 lakh, the Royal Enfield Hunter 350 offers great bang for your buck. It’s priced significantly lower than the Honda CB350RS and on par with the 225cc, TVS Ronin. RE wanted to make an attractive and affordable motorcycle that’ll be able to draw a wide audience to the brand, and the Hunter does exactly that.