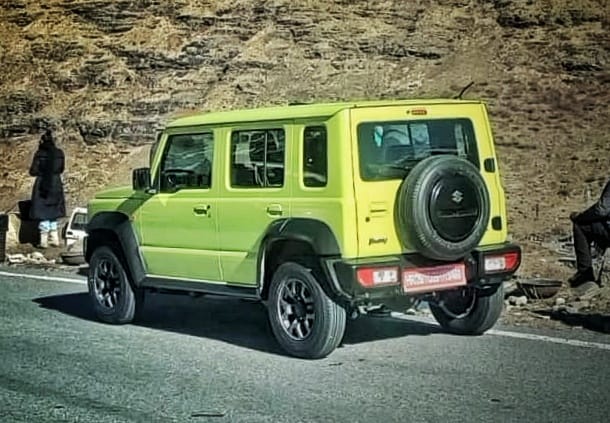 The much awaited Maruti Suzuki Jimny 5-door has been spotted in what seems like final production form, weeks ahead of its global debut which is slated to take place at the Auto Expo 2023.

Jimny 5-door: What do the spy shots reveal

Seen somewhere in north India, the Jimny 5-door seems to be undergoing final round of tests without any camo. This is the first ever sighting of the Jimny long and what’s seen here confirms that there Jimny 5-door, apart from the longer wheelbase, two more doors and a bigger bodyshell, may not get many visual differences from its three-row counterpart.  The Jimny 5-door is based on the global version of the Jimny which is also known as Jimny Sierra which comes with chunky alloy wheels and fender flares.

Seen in these pictures in its popular “Kinetic Yellow” exterior paint shade, the Jimny 5-door clearly is much longer than its three-row version.  Set to have a length of around 3,850mm, the JImny 5-door’s wheelbase will see an increase of 300mm to 2,550mm instead of 2,250mm for the shorter version. The newly designed door for the second row passengers blends neatly with the Jimny’s boxy bodystyle but gets a much smaller “usable” rear glass area thanks to a larg-ish quarter glass for the rear door.  The extended portion behind the rear door is also new and gets its unique glass area which is surrounded by thick pillars at both corners.  The Jimny 5-door, also known as Jimny long  or Suzuki YWD gets no major styling changes at the back and it carries the same side opening door with exposed hinges, a door mounted spare tyre with black covering and the same rear bumper and taillamp design as the three-door JImny.

As reported by us before, the Jimny 5-door will continue with the K15B engine and is expected to come with the same four-speed automatic or a five-speed manual gearbox option. Suzuki’s AllGrip Pro 4WD with a manual transfer case and low range will be standard on most variants, according to sources.

What else is Maruti showing at the Auto Expo 2023

While the JImny 5-door will be one of the show stoppers for Maruti, the brand will also take the wraps off an all-new Baleno based coupe SUV and also an all-new Creta sized EV concept SUV. Additionally, there are talks of a flex-fuel concept to be on display as well.