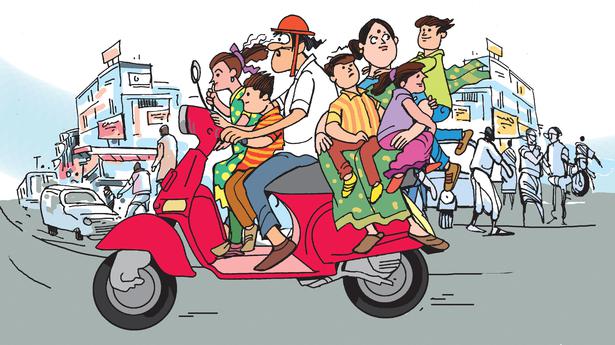 For teachers who want to give you one, daredevil scooter-pooling dads, spying uncles and aunties who saw you on a bike with a boy, and more

For teachers who want to give you one, daredevil scooter-pooling dads, spying uncles and aunties who saw you on a bike with a boy, and more

Since today’s kids go slack-jawed at our technology-deprived childhoods, let’s admit that there are a few apps we could have done with back then.

I’ll Give You One: To be used by any self-respecting teacher. This app would calculate all the Ones that were threatened (and never given). Talk in class – One. Giggle – One. Swear you never talked or giggled – One. And if you committed enough transgressions, you would get the teacher’s ultimate prize: ‘I’ll give you nicely!’

Ride-sharing: In small towns especially, the ride-sharing app would be a hit. My dad’s car used to groan under the weight of at least nine people who were all ‘going that way, give me a ride too.’ Scooters comfortably carried six school kids, the smallest two squashed against the handlebar, ribbons and ponytails obliterating the rider’s (dad of the day) view. Mums on the scooter needed to balance another two kids on their lap, almost throttled by a third hanging off their necks and flying along. And if you came across a scooter that had broken down on the way, you picked up their load as well, in a wobbly human pyramid that no acrobats would dare to attempt.

GPS: Built-in app to encourage everyone to go out of their way to helpfully give directions, regardless of whether they knew the way or not. ‘Three lampposts after the broken truck, turn towards the chewing cows and ask someone for the open manhole, but if you reach the sugarcane seller, you’ve gone too far.’ Since no one’s directions matched, this app would ensure the lost person stayed lost.

CCTV: To mimic the espionage ring operated by aunties and uncles which beat modern-day surveillance hollow. My parents were once called by a well-meaning, all-seeing uncle to warn of some boy giving their daughter a bike ride. The daughter (me) was halfway across the country in college then. The uncle did a rewind, pause and zoom-in in his head and then called another unsuspecting parent with the same complaint.

Doctor Everything: This app would call the nearest doctor, which meant the nearest adult. Because all adults confidently dispensed medical knowhow for every malady from worms to heatstroke, and the hapless suffering child had to further suffer the swallowing of neem juice or castor oil, which often came right out the way it went in. The local GP meanwhile handled everything from ‘My husband snores’ onwards. My GP bored my ears and stitched my knee, once even telling me a ghost story which brought my hiccups to a yelped stop.

Weather and Whether Apps: If a lizard krrik-krrikked, it would rain. If a kid fainted during School Assembly, it was around 35 degrees C; If ten kids fainted, it was over 40 degrees. Whether it rained or stormed made little difference. Kids played outdoors all day. Perhaps Apps were of little use when we were already Appy.

Where Jane De Suza, the author of Happily Never After, talks about the week’s quirks, quacks and hacks