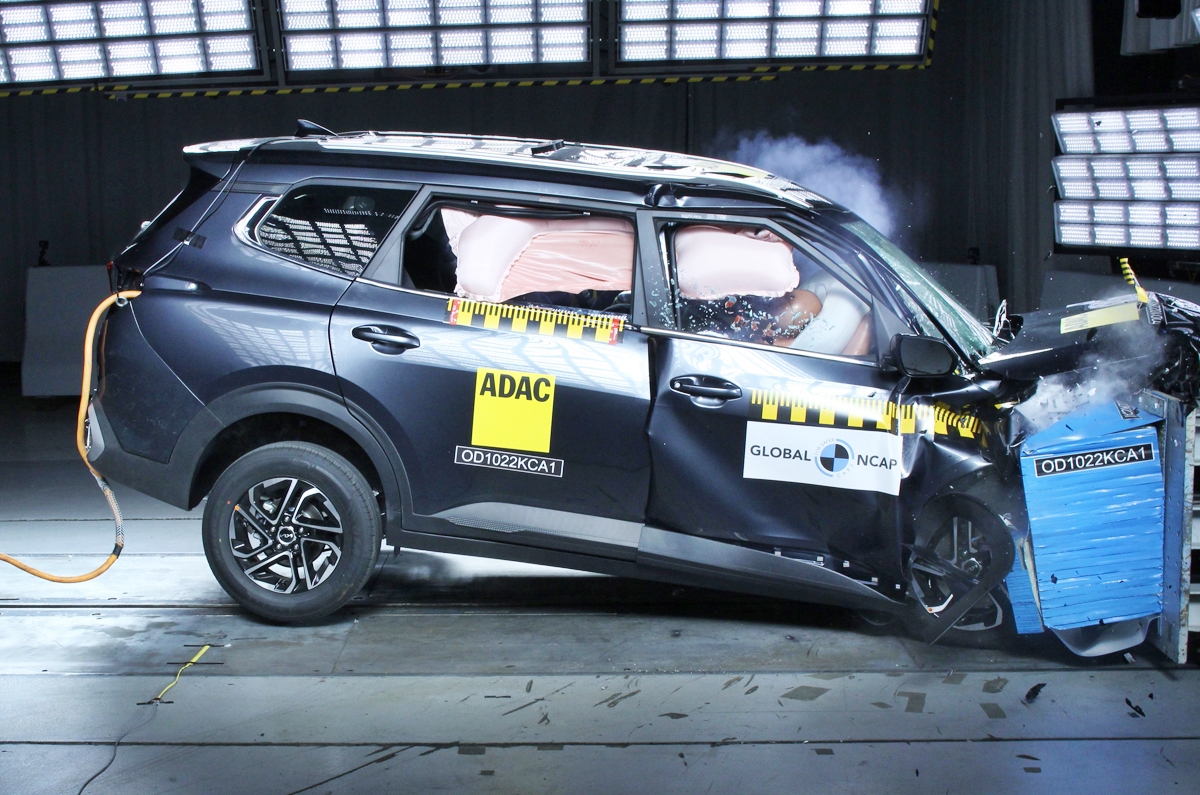 The Carens’ base model was on test, which comes fully-loaded with all safety features, including six airbags and ESC.

The Kia Carens has scored a 3-star rating for both adult and child occupant protection in the latest round of crash tests by the Global New Car Assessment Programme (GNCAP).

As is the norm at GNCAP crash tests, the Carens was tested in its most basic safety specification. Interestingly though, all safety features on the Carens are standard right from its base variant. This means the unit tested came fitted with six airbags, ESC, seatbelt pretensioners, ABS, all wheel disc brakes, brake assist system and TPMS. An average 3-star rating is, therefore, surprising.

The Carens is the last model to be tested under the current testing protocol of the automotive safety watchdog. As part of its SaferCarsForIndia campaign, July onwards, the testing protocol is set to be enhanced.

3-stars for Carens at GNCAP: breaking down the score

The Carens secured a total of 9.30 points out of a possible 17 in adult occupant protection. Global NCAP’s report states that on impact, the Carens’ structure and footwell area were both ‘unstable’, and that the bodyshell was not capable of ‘withstanding further loadings’.

Head and neck protection for both adult crash test dummies were noted as good, however, driver’s chest protection was rated marginal. Front occupant knee protection was also marginal, thanks to potential impact with ‘dangerous structures behind the dashboard’.

In terms of child occupant protection, the Kia Carens scored a total of 30.99 out of 49 points. The Carens gets ISOFIX mounting points, and child restraint systems were also in place and well-marked. The car offered limited protection to the dummy of a three-year-old sat in a forward-facing child seat, although it was rated good for the dummy of a 1.5-year-old sat in rear facing child seats. The Carens, however, gets a lap belt for the rear centre seat, thus losing some crucial points there.

As the tested model came fitted with two side body and head protection airbags, the Carens was also subjected to side impact test, which it duly passed.

Alejandro Furas, secretary general of the Global NCAP, said, “We expected a better performance from this model. It remains a cause for concern that global car brands such as Kia, that normally achieve 5-star ratings in other markets, are still not reaching this level in India.”

The Carens is a three-row derivative of the Seltos, and uses the same platform as the latter. The Kia Seltos too had scored a 3-star rating at the GNCAP in 2020. Importantly though, the Carens has improved on its overall score in comparison to the Seltos. The Carens has 9.30 points in adult occupant protection as opposed to the Seltos’ 8.03 points. Meanwhile, in child occupant protection, the Carens is significantly better with 3-stars and 30.99 points as opposed to Seltos’ mere 2 stars and 15 points. That’s primarily due to the addition of ISOFIX mounting points and recommending a child restraint system on the Carens.

GNCAP testing protocols to get stricter

GNCAP is all set to introduce a more enhanced testing protocol starting next month. For cars to achieve a 5-star safety rating, they will have to be mandatorily subjected to side impact tests and will also require the standard fitment of ESC. Additionally, the cars will also have to comply with pedestrian protection measures as per UN requirements.

The new norms also state that even if a car scores multiple stars, in case the dummy reading shows a poor protection for a vital body part, the car will get only one star regardless of the overall points scored.

What are your thoughts on the Carens scoring an 3-star safety rating at Global NCAP? Let us know in the comments below.