Bots as a Service is making India Inc agile 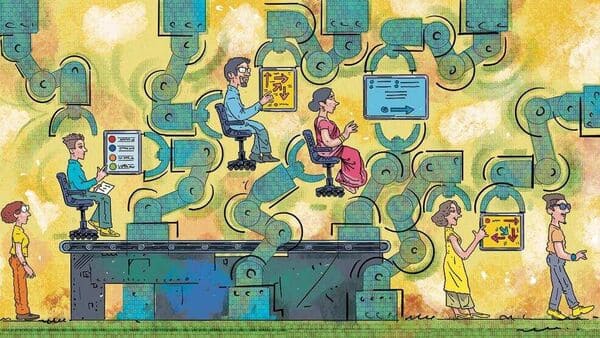 
Bots are the robots of the services world. They are configurable pieces of software that can be set up to perform a specific task, usually those that are repetitive in nature. The KYC bot extracts data (from the front-end application/ scanned images), validates it (using internal and external databases) and inputs it into core banking systems.

“Bots-as-a-service is being used for data validation internally, which helps in instant validation and thereby achieves zero errors and straight-through account opening. In the earlier KYC process, there were 40 checks being carried out across eight-nine steps,” says Ratan Kesh, executive vice president and head–retail operations & service, Axis Bank.

Today, India’s third-largest private bank has 700 bots running 300 processes every day. Apart from KYC validation and account opening, they also handle instant loans, trade services, underwriting, card operations, cheque clearing, fraud detection, procurement, audit and invoicing. One of the bank’s biggest successes is in the corporate banking business, where loan approval is now 25% faster. Thanks to this adoption of Bots as a Service, often shortened to BaaS, Axis Bank has been able to raise the productivity of its relationship managers.

Intelligent automation is the next big thing in enterprise software automation and BaaS is a big part of this technological shift. It integrates new-gen technologies such as robotic process automation (RPA), artificial intelligence (AI), and business process management (BPM) to automate processes in a manner that’s intelligent, smart, and cost-effective.

In line with this shift, organizations are adopting BaaS, deploying software bots to automate business processes and increase efficiency. BaaS providers enable businesses to leverage chatbots in a pay-as-you-go manner, without needing to licence the bot or train a technical team to manage or maintain it. The BaaS model also lends itself well to smaller “bot-driven-microservices” that can accomplish isolated tasks and be invoked from anywhere.

According to market intelligence firm IDC, 30% of large organizations will double the use of intelligent automation in various use-cases by 2027.

“The covid pandemic has highlighted the need to be resilient and Indian enterprises are focusing on becoming intelligent organizations by leveraging the power of data. Enterprises must focus on shifting from a ‘process-driven’ mindset to a ‘data-driven culture,” says Rishu Sharma, associate research director, Cloud and AI, IDC India.

Management experts believe intelligent automation is now permeating into industries that were not inherently digital. “With a 40-50x decrease in cost of data sharing and processing, and significant leaps in machine learning and deep learning methods, automation is transforming organizations by helping them become more predictive and prescriptive,” says Nishant Nishchal, partner, Kearney, a global management consulting firm.

“Even the traditional ‘follower’ industries in adopting digital—oil & gas, utilities, chemicals, construction—are onto this transformation, and leapfrogging to create significant competitive advantages for themselves,” he adds.

A bot can either be attended or unattended. Attended bots require some level of human intervention. They are often used in the front office and in unison with human workers. Attended automation is common in call centres, allowing employees to interact with data and to better deliver customer services.

Unattended automation bots, on the other hand, do not need human intervention to complete their tasks. These bots can automate the process of taking information from one application and entering it into a second application.

Omega Healthcare, a company that provides revenue cycle management and clinical communication services for healthcare clients, has been on a digital transformation journey for the past few years. With the help of new intelligent automation tools, the company has reduced the claim-to-cash duration by 25-30% for end-users. Claim-to-cash duration refers to the time taken for customers to get their cash after making the insurance claims.

Vijayashree Natarajan, SVP–head of Technology, Omega Healthcare, says that thanks to the company’s automated platform, robots check claims every seven days. “This has helped reduce claim follow-up, thereby improving our days’ sales outstanding (DSO). In addition, the claim resolution time has increased to 70% post automation and quicker actions on denials have resulted in reducing late payments and penalties,” she explains.

Uber started automating its financial processes in North America a few years ago. After three years, it has more than 100 automation processes in place, saving an estimated $10 million per year, according to a case study published by RPA solutions provider UiPath. Automation has ensured that the company’s geographic operations are in sync and senior management can see a snapshot of overall operations. It also helps Uber manage regulatory compliance.

Automated business processes have had a significant impact on Uber’s operations and revenue. In London, for example, Uber Freight was at risk of losing its licence to operate because it was scaling so quickly and having trouble tracking safety procedures. It took six weeks to build a bot to maintain start-to-finish tracking of all safety measures to satisfy regulators. If Uber had lost its freight licence in London, it would have taken a 3-4% hit in its top line.

Intelligent automation has delivered in a big way for Axis Bank, too, says Kesh. “It has helped us deliver a superior customer experience by facilitating digitalization of existing customer journeys without necessarily changing legacy platforms. It has also helped us build automated controls for seamless regulatory adherence and operational risk management,” he adds.

Robotic process automation has played a big part in the shift towards intelligent automation. Across industries, chief information officers have been using it to do more with less, automating routine and repetitive tasks to generate cost savings.

According to a Forrester report, the RPA market alone is expected to reach $22 billion by 2025. Of this, software is expected to touch $6 billion and services, $16 billion. The top RPA providers globally are UiPath, Automation Anywhere, Blue Prism, and WorkFusion.

“Embedding RPA into enterprise software suites or making RPA part of a broader intelligent automation play is a long-term trend as enterprises build a heterogeneous automation fabric,” Forrester stated in its report. The research firm predicts that in 2022, 5% of Fortune 500 companies will adopt an automation fabric to drive automation-fuelled business transformation.

Companies such as UiPath have been riding the digital transformation wave, which is compelling enterprises to think of ways to increase productivity and decrease costs. “Automation is the fourth irreversible trend in this world after globalisation, digitalisation and mobility…One of the biggest boosters for the adoption of automation is the covid pandemic, with companies making a quick shift to advanced automation technologies,” says Anil Bhasin, managing director and vice president, India and South Asia, UiPath.

While the business process management sector has been among the frontrunners in adopting intelligent automation, the need of the hour is scaling up and expanding the use of robots. “This segment is experiencing the maximum growth, with a sub-focus on BFSI. Solutions like Process Mining and Task Mining tools are being used to derive more and more processes that can be automated. Low-code applications and Citizen Developer Programs are also being applied actively in this segment,” adds Bhasin.

North America is Automation Anywhere’s largest market, followed by India and Europe. The company’s India market is growing rapidly, based on increased adoption of automation by enterprises.

“India has also become a global hub for sales, services, and support to strategically align with customers and partners that have a presence in the region while enabling the company to scale globally. The region is a powerhouse for Automation Anywhere with its ability to deliver professional services and support for IT, finance, and other operations,” says Sheth of Automation Anywhere. “In addition, the team in India plays an influential role in expanding our company’s global customer and partner footprint.”

As automation becomes ubiquitous across enterprises, it has, predictably, sparked fears that robots will take jobs away from humans. However, data suggests this is not the case.

Experts believe bots do not take away human jobs but make them easier to perform by handling mundane, repetitive tasks, thereby freeing up humans to focus on strategic or creative tasks. “Just as in other industries, low-level engineering jobs involve repetitive, time-consuming tasks. When automation is applied, it offers a quick return on companies’ investment and is the most effective enterprise software in terms of speed-to-value, freeing up employees for higher-value tasks,” says Bhasin of UiPath.

Indeed, one of the interesting trends that is developing in this space is human-bot collaboration, which requires people to work closely with their digital counterparts.

Apart from the shift to BaaS, there are several trends that will shape how automation evolves in the coming years, says Sheth of Automation Anywhere. The first is cloud automation, which refers to business process automation using cloud-native, web-based, RPA+AI software.

RPA bots are often provided as a cloud service instead of being maintained by the customers’ in-house teams. They automate repetitive tasks and facilitate communications with end customers without human intervention. These bots rely on natural language processing to understand a user’s intent in a conversation and generate responses based on training data or AI capabilities.

Cloud-based automation is also designed for self-service, with intuitive drag-and-drop actions and visual flow charts helping non-technical teams automate on their own. Cloud RPA enables users to automate any process via a web-based interface accessed through their browser.

The second trend is expansion of human-bot collaboration, wherein human workers and digital workers (or bots) work together to achieve shared goals. Many new applications for bots require them to work alongside employees as capable members of human-robot teams.

The third trend is process intelligence, which is the automatic and continuous acquisition of process data at scale across any system in an enterprise to identify bottlenecks and improve operational efficiency. “Using AI and computer vision, it automatically creates a detailed blueprint of digital processes across all applications and departments, and across the entire enterprise,” says Sheth. “It also provides clear and accurate visibility into the current state of organizational processes to improve business process automation, digital transformation, and enterprise optimisation.”