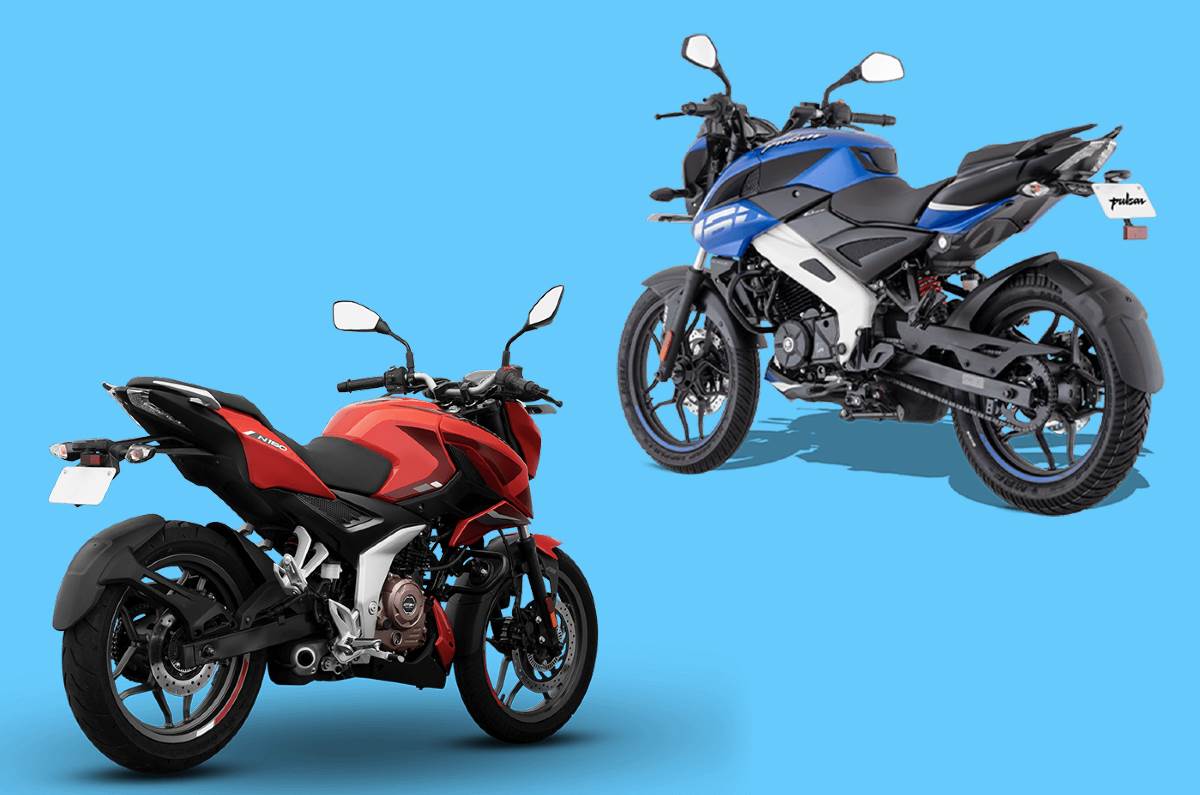 Bajaj is slowly and steadily updating its Pulsar line-up of sporty motorcycles, and the latest entrant is the Pulsar N160 which launched earlier this week. But the Pulsar range already features a 160cc model, in the form of the NS160. So how do the two stablemates compare with each other? Here are the similarities and differences.

Despite the similar names and displacement figures, the two bikes are powered by considerably different engines. For starters, the N160 gets a 2-valve head, unlike the 4-valve head seen on the NS. Displacement figures are also slightly different, with the new N coming in at 164.8cc, while the NS sits at 160.3cc.

And finally, there is a difference in output figures. Torque is nearly the same – 14.65Nm for the N and 14.6Nm for the NS. But the NS has an advantage when it comes to horsepower, with 17.2hp compared to the N160’s 16hp. But the N160 produces peak figures slightly earlier in the rev range, so it shouldn’t need to be revved out as much as the NS to extract maximum performance.

Similarities in the powertrains are that both engines feature SOHC architecture for the cylinder head, and both are air- and oil-cooled units. Both bikes also feature 5-speed gearboxes.

In the chassis department, too, the NS comes across as a slightly more high-tech package. It sports a perimeter frame, which is the sort of hardware you usually see on performance-oriented bikes, while the N160 is built around a simpler single-downtube frame. The N160 claws back some ground with slightly chunkier tyres than the NS, but it does come at the cost of weight. At 151kg, the NS weighs slightly less than the N160, which tips the scales at 152kg for the single-channel ABS variant, and 154kg for the dual-channel ABS version.

That is one of the N160’s trump cards, the fact that it is the only bike in this segment to come with dual-channel ABS. Its brake discs are also larger than the NS’, with a 300mm front (dual-channel ABS) or a 280mm front disc (single-channel ABS), compared to the NS’ 260mm front disc. Both bikes get a 230mm rear disc.

This is one area where the NS160 shows its age, and the N160 feels noticeably fresher. With features like an LED projector headlight, a USB charging port and the new information-rich semi-digital infinity display from the Pulsar 250 line-up, the N160 has a clear upper hand here. It also sports a gear position indicator, which the NS misses out on, even though it also has semi-digital instrumentation.

This is an area of both similarity and difference, because the single-channel ABS variant of the Pulsar N160 costs exactly the same as the Pulsar NS160 – right down to the last rupee. Both bikes are priced at Rs 1,22,854. The dual-channel ABS version is expectedly more expensive, at Rs 1,27,853, which is a reasonable premium to pay for the extra technology and safety on offer.