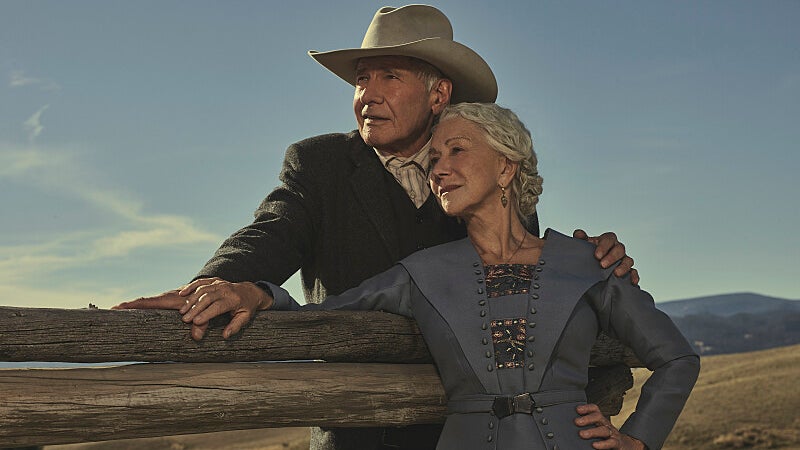 1923 premieres on Sunday, Dec. 18 on Paramount+, with new episodes weekly.

For five seasons and 45 episodes (and counting), Taylor Sheridan’s Yellowstone has told an expansive story chronicling the internal and external travails of the Dutton family, led by patriarch John (Kevin Costner), on the massive Yellowstone Ranch in Montana. With strong writing coupled with great performances and high production values, it has quietly become one of the biggest successes on the modern TV landscape – and spawned something of its own franchise, debuting prequel 1883 last year and now, 1923. Armed with a big budget and a cast to match, 1923 adds texture and context to the mothership while telling a compelling tale in its own right.

Picking up 40 years after 1883, we now follow Jacob and Cara Dutton (Harrison Ford, Helen Mirren). Jacob, brother of 1883’s James Dutton (Tim McGraw), is the great grand-uncle of Costner’s John Dutton III. Following his brother’s death, Jacob raised James’ sons John (James Badge Dale) and Spencer (Brandon Sklenar) as his own. But even as the Yellowstone is now one of the largest cattle ranches in Montana, the family faces a dire situation due to ongoing range wars and economic hardships from what will become the Great Depression.

Ford, in one of his first major TV roles, evinces equal parts compassion and stolid determination as Jacob, a man who’s lived through the loss of his family and tasked himself with keeping their lifetime of work alive. Mirren, with an Irish brogue to go with her shotgun, is a perfect partner for Ford. The pair previously teamed up in 1986’s The Mosquito Coast, and their quiet scenes together in the premiere offer the simple pleasure of watching two consummate professionals play off one another.

Of course, this being a Yellowstone project, there’s more here than just quiet character moments on display, with plenty of rough-riding and gunfighting to go around. Several plot threads are laid out in the first episode that will likely intertwine as the season progresses, among them Dutton son Spencer (last seen as a 10-year-old in 1883, now played as an adult by Brandon Sklenar), dealing with recurring trauma from having fought in the Great War, and now working as an animal hunter in Africa.

Spencer’s story runs on a parallel path with the family, as does that of Teonna (Aminah Nieves) and her teacher Sister Mary (Jennifer Ehle). Their introduction –– involving a ruler and many rapped knuckles –– is quite cringe-inducing, but it neatly lays out the markers for what will presumably be an ongoing arc. Of course, the impending range war, with Jacob at loggerheads with sheep farmer Banner Creighton (Jerome Flynn), will likely serve as the thematic through-line for the remainder of the season (the series is intended to run for two seasons of eight episodes apiece). And by virtue of what comes before and what it leads into, longtime Yellowstone fans will have some sense of where things are headed, but 1923 offers enough to welcome in new fans who may be moved to check it out due to the star-studded cast.

Follows a generation of the Dutton family in 1923 when pandemics, historic drought, the end of Prohibition and the Great Depression all plague the mountain west and the Duttons who call it home.