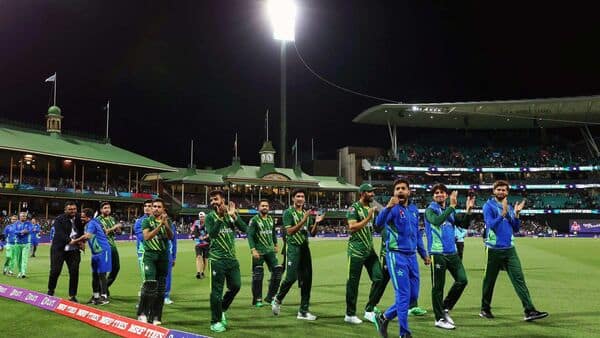 With India all set to face England in the semi final match at the T20I World Cup 2022 in Adelaide Oval on 10 November, former Pakistan pacer Shoaib Akhtar sent a special message to the Indian skipper Rohit Sharma and his squad –Pakistan cricket team will be waiting for India at the Melbourne Cricket Ground.

Earlier on 9 November, the Babar Azam-led Pakistan side secured its place in the T20I World Cup 2022 final to be placed at MCG on 13 November. It defeated New Zealand by 7 wickets, all thanks to outstanding pacer Shaheen Shah Afridi spell, who clinched two important wickets in the initial innings of New Zealand. Also, Babar Azam (53) and Mohammed Rizwan’s (57) stunning partnerships oust the kiwis from the ICC T20I World Cup tournament. The ‘Men in Green’ became the first team to qualify for 2022 T20 World Cup final.

Following the Pakistan’s victory, Akhtar sent a video message in which he expressed his excitement for an India-Pakistan final. In a short clasp shared on Twitter, the previous speedster said: “India, we have reached Melbourne and now we are waiting for you. Wish you the best of luck and hope you reach Melbourne. I want an India vs Pakistan final and, once more, they face each other. The whole world is waiting for it.”

Shoaib Akhtar also mentioned that this 2022 T20 World Cup is more or less similar to the 1992 World Cup which was won by Pakistan. He emphasized on the fact that the 1992 World Cup final was between Pakistan and England, but he still wishes to see India in the finals this time.

Interestingly, on 23 October, India and Pakistan played their first Super 12 match in front of a packed MCG stadium. The ‘Men in Blue’ won the cliffhanger after the match went down to the wire thanks to Virat Kohli’s batting prowess. This time, Pakistan seems well prepared and in absolute momentum.

It should be noted that Pakistan has experienced a lot of coincidences during this World Cup that are said to be comparable to those that occurred during the 1992 tournament. In the 1992 World Cup, Pakistan also lost their league match against India, and had defeated New Zealand in the semifinals.

Cricket fans are eagerly anticipating the India-England match because it may alter Pakistan’s series of coincidences with the 1992 World Cup, when Pakistan defeated England in the final.

Against a formidable England team, India will have their work cut out for them. England became a formidable force in white-ball cricket under Eoin Morgan, and now, under Jos Buttler’s leadership, they have advanced to the T20 World Cup semi-finals.

Due to injuries sustained during the net session by Rohit Sharma and Virat Kohli, India faced a number of injury concerns prior to the match. Both players are healthy and fit for selection.

Considering the chances for both India and Pakistan, this may get interesting, if Indian pacers take early wickets or, Kohli dominate with his batting prowess. However, all depends on the middle order bowlers who economy will decide the pace of the game.

The India Vs England T20 World Cup, Semi Final match begins at 1:30 PM IST. In India, the match will be broadcast on the Star Sports Network. Online viewers can follow the live action via Disney+Hotstar.