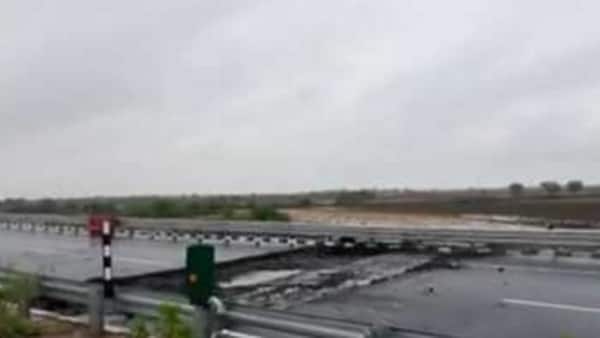 A portion of the newly inaugurated 296-km-long Bundelkhand expressway has developed deep potholes due to heavy rainfall in Uttar Pradesh, within a week of Prime Minister Narendra Modi launching this long-stretched road.

However, the chuckholes were repaired instantly and the road opened for traffic movement, the official added, as quoted by news agency PTI.

He added that the UP Expressway Industrial Authority deployed a team with bulldozers and necessary equipments for the repair work.

The ruling-Bharatiya Janata Party (BJP) was heavily criticized by Opposition parties about the quality of the road construction and sought action against concerned officials and companies.

Samajwadi Party chief Akhilesh Yadav said that the potholes in Bundelkhand Expressway is an example of the quality of development works done by BJP.

“This is an example of the quality of the BJP’s half-hearted development. On the other hand, the Bundelkhand Expressway was inaugurated by the big people. Within a week, huge pits of corruption came out on it. It is good that the runway was not built on it,” SP chief tweeted.

Meanwhile, BJP MP Varun Gandhi also tweeted in Hindi saying, “If the expressway built at a cost of ₹15,000 crore cannot withstand even five days of rain, then serious questions rise on its quality.”

“The head of the project, the engineer concerned and responsible companies should be summoned and action be taken against them,” he added.

The UP Congress also targeted the BJP government on Twitter on the issue, saying the ruling government had promised pothole-free roads, however, the development has taken a hit after four days of inauguration of the Bundelkhand expressway, it said.

The 296 km four-lane expressway has been constructed at a cost of around  ₹14,850 crore under the aegis of Uttar Pradesh Expressways Industrial Development Authority (UPEIDA), and can later be expanded up to six lanes as well. It is expected to give a major boost to connectivity and industrial development in the region.