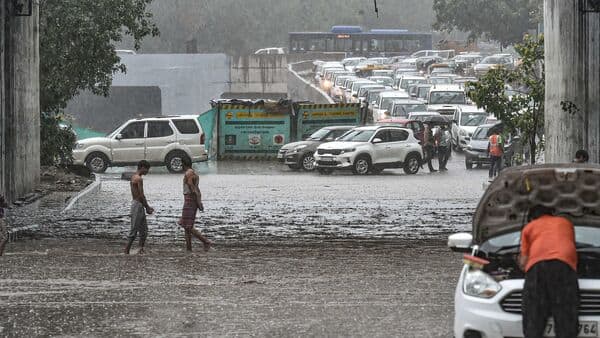 “Southwest Monsoon has advanced into entire Uttar Pradesh, Himachal Pradesh and Jammu & Kashmir, some parts of Rajasthan, entire Delhi, some parts of Punjab and Haryana today, the 30th June, 2022,” the weather department said.

Some airlines have issued advisory, saying that flight operations have been impacted.

“Due to bad weather, our flight operations are impacted in #Delhi and #Chandigarh. Please keep a tab on your flight status before leaving for the airport,” IndiGo said in a tweet.

“Due to bad weather in Delhi (DEL), all departures/arrivals and their consequential flights may get affected. Passengers are requested to keep a check on their flight status,” another airline SpiceJet said in a tweet.

Delhi Traffic Police in a series of tweeted have urged commuters to avoid some stretches of road. “Traffic is affected on Baba Banda Singh Bahadur Setu in the carriageways going from Lodhi Underpass and AIIMS towards Sarai Kale Khan and DND due to waterlogging. Commuters are requested to avoid the stretch,” it said in a tweet.

“Movement of traffic has been restricted at Railway underpass Pul Prahladpur. Both the carriageways are closed due to waterlogging,” it added.

Traffic is affected in the carriageway from IIT Flyover towards Munirka due to breakdown of an HTV, Delhi Traffic Police said.