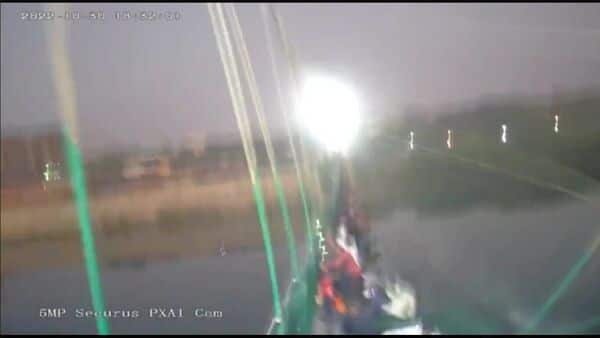 The CCTV footage of the moment before the Morbi bridge collapse has been released.

There are numerous conspiracy theories floating around regarding the British-era bridge’s demise. Even in the CCTV footage, people are seen trying to rock the bridge by grabbing it from both sides.

About 500 people, including women and children, were thrown into the river below as the cables supporting the suspension bridge gave way. Numerous people were taking part in Chhath puja ceremonies atop the 300-km-long, 150-year-old bridge.

For seven months, the Machchhu River Bridge was inaccessible for maintenance. It was reopened to the public on October 26, the day following the Gujarati New Year. People fell on top of one another when the bridge gave way. Videos showed many people desperately clinging to the bridge’s wreckage, however some were seen swimming to safety.

Some people charged the Aam Aadmi Party (AAP) with orchestrating the scheme in light of the Gujarat Elections in December. Some shared screenshots of pro-AAP tweets that stated that Gujarat would see a “dhamaka” on October 30. Presently visiting Gujarat is Prime Minister Narendra Modi, who said he would continue his election campaign to follow the “path of duty” despite being hurt by the incident.