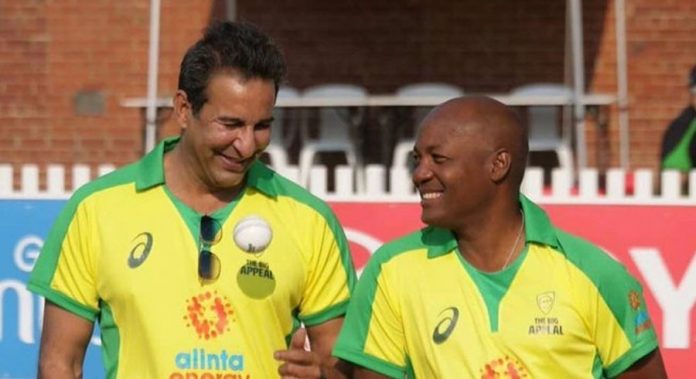 Wasim Akram and Brian Lara have been at one another for years, winning some and losing some. While the on-field rivalry was intense, so is the respect shared by all the exponents of their trades and Akram and Lara are no different.

So, the Pakistani was pleasantly surprised when the two met in a charity event and Lara asked him to sign a boot. “The Prince of Trinidad never ceases to amaze, years after retirement from the game!

We met at a charity and he brought this shoe with him to make sure I would sign it – he’d held on to it since 1992 WC when I hit him on the toe (after he got 88!) Hold a grudge much, @BrianLara'” Wasim Akram tweeted.

The story goes back to the 1992 World Cup league match between the two teams on February 23 of that year. This was a match that saw only two wickets falling in all of two innings.

During the West Indies inning, their only loss was Lara retired hurt, falling victim to a toe-crunching yorker from Akram landing on the boot, the same one he now has had signed from the bowler.

Pakistan batted first and thanks to Ramiz Raja’s 102 not out, posted 220 for 2 in 50 overs, with Javed Miandad contributing an undefeated half-century.

However, this was just not enough to stop the West Indies as Desmond Haynes and Lara, as opener, were too good for Pakistan. Listen to the latest songs, only on JioSaavn.com

Pakistan, after being on the verge of being dismissed, clawed back to win some crucial games in the latter stages of the group and played the final against England and won their maiden World Cup title. Akram was a star in that match as well.

Here’s how you can recover your money after a wrong transaction?