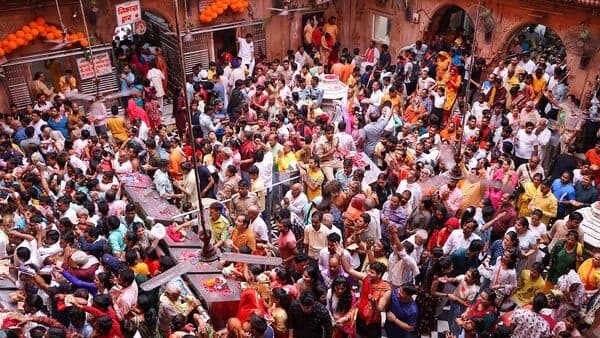 The timings at Vrindavan’s Banke Bihari temple will change from October 27. The temple currently remains open for darshan from 7:30 am to 12 noon in the morning and from 5:30 pm to 9:30 pm in the evening. The security measures around the temple have also been upgraded ahead of Govardhan puja on Wednesday.

As per reports, Adequate force has been posted at major temples and on the circumambulation route while police have also been posted in plain clothes at all the major temples to avoid pickpocketing, chain snatching and misbehavior with women.

Earlier in the month, the district administration had stepped up arrangements for devotees at Banke Bihari temple ahead of Diwali celebrations. The celebrations during the festival of lights typically see swathes of crowds coming to the city to offer their prayers.

The district administration had added facilities such as a shoe deposit facility at the footwear collection centers for safekeeping and parking space for cars near the temple premises.

Due to a rush during Janmashtami celebrations, two devotees died of suffocation and seven others were hurt in a stampede at the temple in August.