Mother Mary in a sari, Infant Jesus in zardozi — the Museum of Christian Art in Goa’s heritage district of Velha showcases the state’s cultural exchanges with Portugal and the rest of Europe

Mother Mary in a sari, Infant Jesus in zardozi — the Museum of Christian Art in Goa’s heritage district of Velha showcases the state’s cultural exchanges with Portugal and the rest of Europe

Ever since my move to Goa a few years ago, I have haunted abandoned houses and museums and pored over literature in an attempt to understand my new home. The Museum of Christian Art (MoCA) in Velha, North Goa, with its confluence of cultures, was high on this list. But it was inaccessible — closed for renovation since 2017. So, when it reopened in May, visitors like me were quick to take the ferry from Salim Ali National Park to a jetty in Old Goa to spend an afternoon there.

The 17th century Convent of Santa Monica (within which is housed the MoCA) sits neatly in a depression amidst the hills, its large buttresses reaching out like a hand. The few remaining laterite walls of the nearby St Augustine Monastery ruins cast shifting shadows over it. You walk along the austere building to a little door at the far end of the wall, visible only because of the large brass name plate.

The Virgin on a lotus

I have always enjoyed Christian art (especially in my role as a writer on Indian art): the richness of its colour and form, resplendent with symbolism and poetry, characters frozen in time and in remembrance. But the MoCA is more than a collection of objects; it is a layering of histories both private and public. Most of the works there have been donated by families in Goa, who, in sharing the objects, also revealed a personal history of the people, places and the passage of time. The MoCA is, in many ways, a people’s museum.

Immediately inside the glass doors, a four-and-a-half-foot tabernacle monstrance made in the 17th century greets visitors. An enormous pelican, its breast a golden sunburst to show off the consecrated host, rides atop a globe. The delicacy of the silver work over wood is a fine example of Indo-Portuguese design. Many of the works in the museum were crafted and designed in India, allowing for the craftsmen to add elements from the sub-continent. For example, the magnificent Infant Jesus Saviour of the World is dressed in a velvet gown of fine gold zardozi work with motifs of Persian influence.

Natasha Fernandes, the curator, shares one of her favourite pieces: a 20th century ivory statue of the Virgin Mary that is not taller than a finger. Called Nirmala Matha (the immaculate mother), it was donated by Fr Joaquim Loiola Pereria from Benaulim, South Goa. The story goes that Fr Joaquim discovered the statue by his bed when he entered his room at the seminary in Pune. Assuming it had been left behind by an earlier resident, he returned it to the office only to learn that no one had occupied the room for years. Fr Joaquim brought it with him to Goa and later gave it to MoCA. 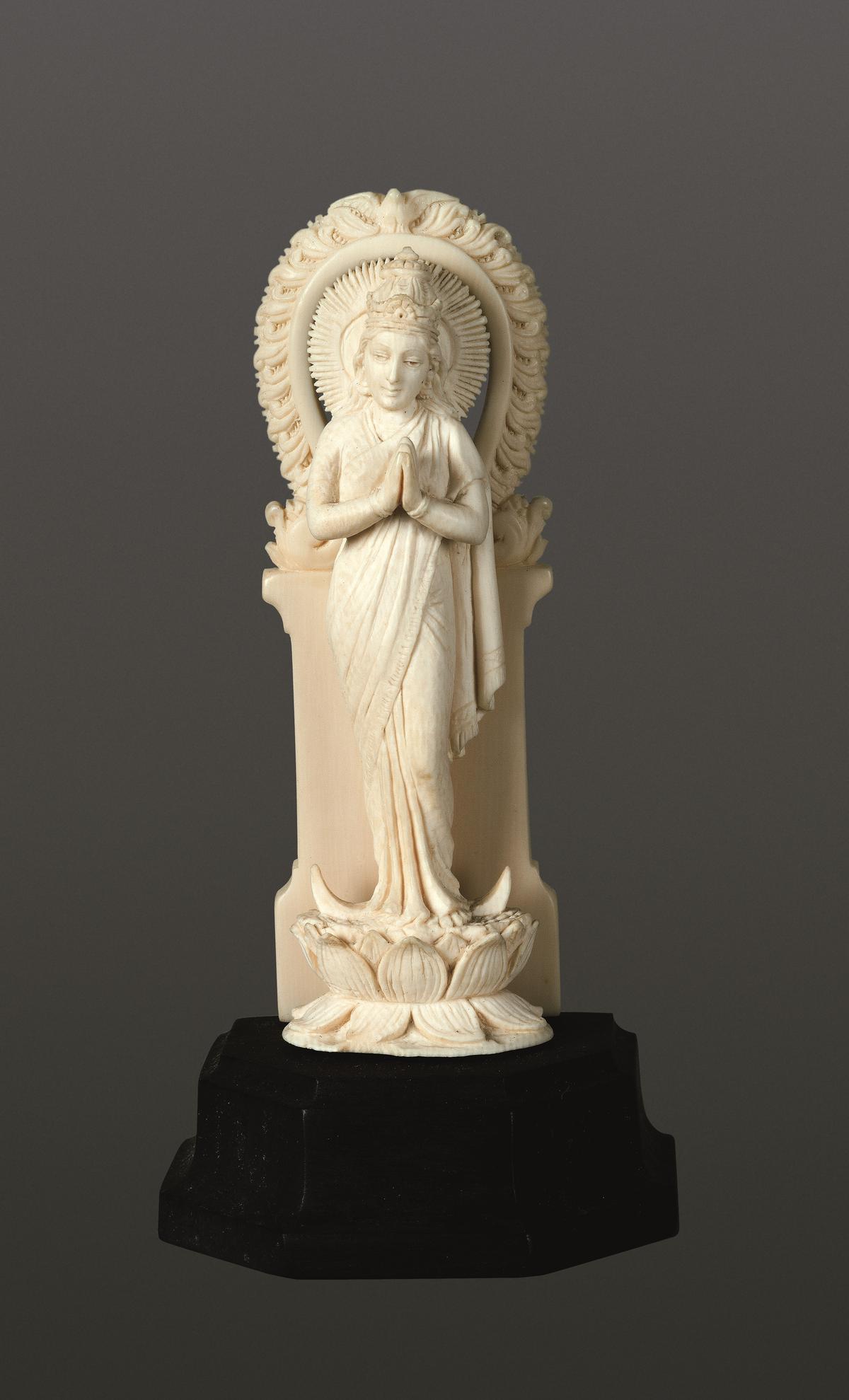 The statue, like the museum, is more than what meets the eye. The Virgin stands on a crescent moon perched delicately on a lotus in bloom, clad in a sari. The references to Indian art and the goddess Lakshmi are evident. Fernandes explains that the piece “captures the essence of the museum’s vision”, the almost perfect balance between the East and the West.

Among the museum’s over 200 objects, dating from the 16th to the 20th century, is a rare portable altar. Popular in early Roman and Byzantine times, it became fashionable in Europe in the 11th century. The altar at the museum was made in the 19th century and is the size of a small trunk, which when opened reveals smaller cabinets, drawers, a candle stand, an altar top with a marble altar stone and a stand to hold the Bible upright. The vertical unfolding section carries the images of Jesus, and a sunburst-style monstrance. The portable altar
| Photo Credit: Antonio Cunha under the commission of the Calouste Gulbenkian Foundation

Equally interesting are the newly-restored art works on wood and canvas. In the collection are superb examples of the traditional Our Lady of Sorrows, The Martyrs of Morocco, and a beautiful depiction of the Lord of the Green Reed — a 17th century work with a distinctive Italianate influence filled with pathos and darkness. There are excellent wood carvings, too, such as the 17th century Our Lady of Immaculate Conception with Child.

Behind the white walls

MoCA started off in 1994 as a way of archiving and preserving Goa’s rich heritage and religious iconography. The earliest objects were housed at the Seminary of Rachol in South Goa. The museum moved to its current location in the early 2000s and is now one of the notable small museums in Goa. It was restored in collaboration with the Calouste Gulbenkian Foundation, Lisbon, and INTACH, New Delhi. The 625 square metre museum — spread across the first floor and the choir loft — brings together scholars from the fields of history and art to create and develop dialogues around its collection through lectures and exhibitions. MoCA has started an online series, titled ‘Heritage Hour’, and, more recently, a collaboration with the India Foundation for the Arts (IFA), which gives grants and encourages grantees to study and research the collection.

Made of gilt and polychrome, and adorned with gold and rose-cut diamonds set in silver, it was crafted in Goa and for over 300 years formed part of the Earls of Nova Goa’s private devotion in Lisbon. The piece was donated by the daughter of the third earl, Teresa Maria Mendia de Castro.

Walking through the maze of vitrines grouped by material — precious metal, liturgical objects, textile, wood, furniture and ivory — the 18th century chasuble from St Michael’s church at Orlim stands out. It is the most visible vestment used by priests at the celebration of Mass. The aged white silk is embroidered with Persian-inspired motifs, gold zardozi worked delicately into the acanthus leaves, Mughal carnations and marigolds. At its heart is a beautifully embroidered pineapple. The pineapple was first seen by Christopher Columbus in 1493 in South America. Stories abound of the fruit’s origin in Goa, some believing that it was carried by D. Luiz Fernandes de Vasconcelos in the mid 1560s as he set sail to India from Brazil, later planting it in his garden. It is perhaps this layering of shared histories that makes the museum so unusual in what it sets out to achieve: a quiet dialogue of cultural exchanges through design and craft. 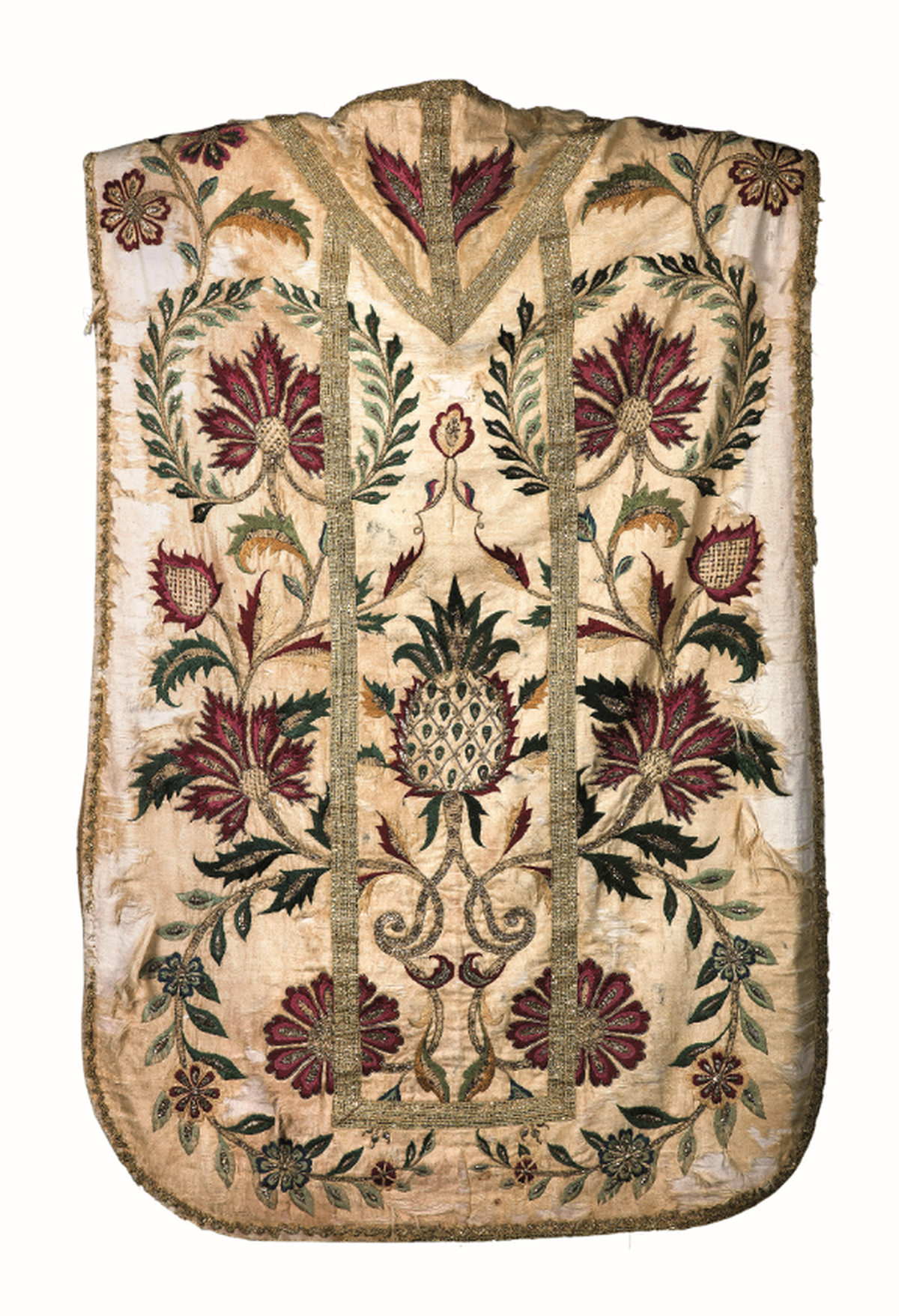 The 18th century chasuble from St Michael’s church at Orlim
| Photo Credit: Antonio Cunha under the commission of the Calouste Gulbenkian Foundation

As I sip a coffee in the museum’s outdoor café, I think about MoCA’s importance and its place in India today. We live in a time of extremism and a skewed understanding of nationalism, and museums like these are important reminders of our country’s long history of embracing diverse traditions and cultures, contributing to a larger dialogue with the sub-continent and the West, and celebrating syncretic traditions.

The writer lives in Goa.