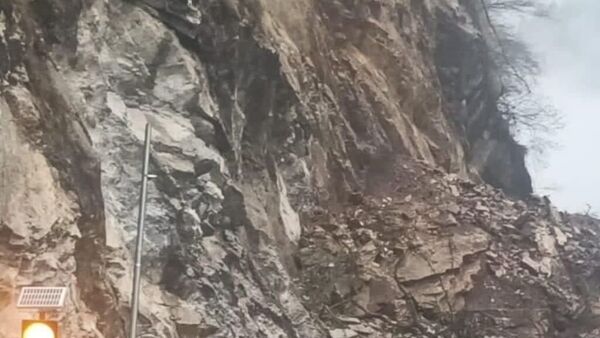 In Uttarakhand, the Badrinath National Highway-7 in Karnprayad on Thursday was blocked for few hours due to the falling of boulders from the hill near Panchpulia. Following this, passengers going to Badrinath pilgrim at night were also stopped at Gauchar and their vehicles going towards Rishikesh were stopped at Karnprayag and Langasu for safety purpose, according to news agency ANI.

Shweta Choubey, Superitendent of Police Chamoli said that the work of opening the highway was carried out during the day.

Earlier in July, heavy rainfall in the Chamoli district also caused damages on NH-7. The recent media reports alleged that the Uttarakhand government has given the prestigious Chardham Project to a bracklisted company.

However, the National Highways and Infrastructure Development (NHIDCL) dismissed the reports and clarified that no blacklisted contractor is engaged in this project and the selection of contractors was done following a prescribed diligent process.

The Uttarakhand Char Dham Yatra had begun with the opening of the Gangotri and Yamunotri temples in the Uttarkashi district. Kedarnath in Rudraprayag district opened on May 6 and Badrinath in Chamoli district on May 8.

According to the information from Badri-Kedar Temple Committee on June 18, over 7 lakh 60 thousand pilgrims visited Badrinath and 7 lakh 27 thousand Kedarnath, while 3 lakh 84 thousand in Gangotri, 2 lakh 94 thousand Yamunotri.

This year, a total 91 pilgrims lost their lives during the Char Dham Yatra in Uttarakhand till May 27, according to ANI.

Before the beginning of Char Dham Yatra, Uttarakhand Chief Minister Pushkar Singh Dhami visited Kedarnath to review the reconstruction projects and preparations underway and did an on-the-spot inspection of the Saraswati Aastha Path, which has been completed and issued instructions for the early completion of the Mandakini Aastha Path. He also took information about the buildings being constructed near the temple in the traditional hill style.

The application provides weather updates by the meteorological department, and advanced notifications in case of any weather-related disruptions or impediments like landslides along the way.