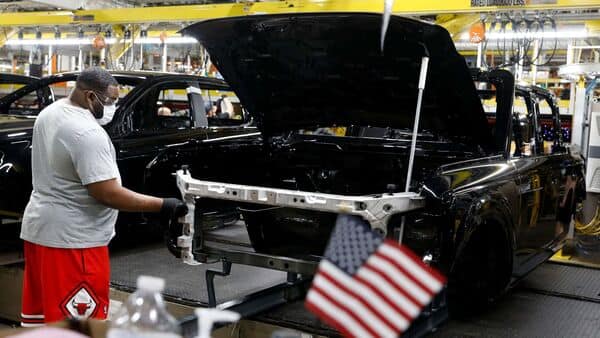 The US economy grew robustly in the fourth quarter, the government confirmed on Wednesday, but momentum has slowed significantly amid a surge in COVID-19 infections at the start of the year, snarled supply chains and soaring inflation.

Gross domestic product increased at a 6.9% annualized rate, the Commerce Department said in its third estimate of fourth-quarter GDP growth. That was revised slightly down from the 7.0% pace estimated in February.

The economy grew at a 2.3% rate in the third quarter. Growth is 3.1% above its pre-pandemic level. Economists polled by Reuters had expected GDP growth would be revised up to a 7.1% rate. The revision to the fourth-quarter GDP reading reflected downgrades to consumer spending and export growth.

But that’s all in the rear-view mirror. An onslaught of coronavirus infections contributed to undercutting spending as well as disrupting activity at factories and services businesses early in the year. While infections have dramatically declined, leading to the rolling back of restrictions across the country, inflation is soaring as supply chains remain stretched.

The Federal Reserve this month raised its policy interest rate by 25 basis points, the first hike in more than three years and signaled an aggressive stance that has left the bond market fearing a recession down the road. The widely tracked U.S. 2-year/10-year Treasury briefly inverted on Tuesday for the first time since September 2019.

But economists said the Fed’s massive holdings of Treasuries and mortgage backed securities made it hard to get a clear read from the yield curve moves.

“This is likely placing further downward pressure on longer- term rates, and it may only be once balance sheet reduction begins, likely in June, that we will get a better sense of how much this may be distorting long-term yields lower,” said Andrew Hollenhorst, chief U.S. economist at Citigroup in New York.

Economists expect the expansion to continue, with a tightening labor market and massive savings cushioning households against high inflation.

Corporate profits with inventory valuation and capital consumption adjustments increased at a $20.4 billion rate in the fourth quarter after rising at a $96.9 billion pace in the third quarter. (Reporting by Lucia Mutikani; Editing by Andrea Ricci)