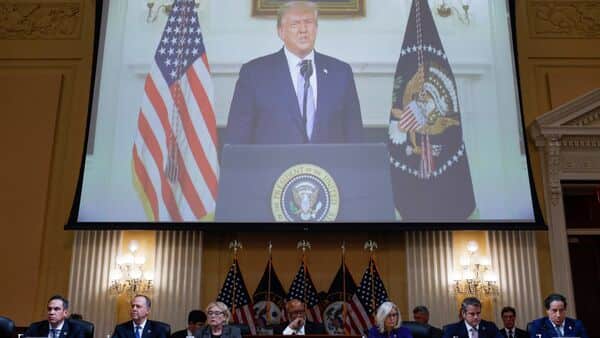 The House panel that investigated last year’s attack on the US Capitol recommended Monday that criminal charges be filed against former president Donald Trump.

The committee unanimously recommended that the Justice Department charge Trump with inciting an insurrection, obstruction of an official proceeding, conspiring to defraud the US government and making false statements.

The US is not a country where “foot soldiers go to jail and the masterminds and ringleaders get a free pass,” the Maryland Democrat said.

The committee’s referral doesn’t require the Justice Department to prosecute Trump and in fact has no formal legal impact. But it is a powerful statement to federal and state prosecutors as well as the broader public. The committee also recommended charges related to obstructing a congressional proceeding.

The action adds to the troubles plaguing the 2024 re-election bid Trump launched last month. Another House committee is scheduled to meet on Tuesday to consider publicly releasing Trump’s tax returns, which he fought to keep private. The Ways and Means Committee obtained the documents after a lengthy court battle.

In recent weeks, Trump’s company has been convicted of tax fraud, his dinner with a white supremacist provoked furious criticism and polls show his support plummeting after disappointing Republican results in midterm elections. Some polls show him trailing Florida Governor Ron DeSantis in the Republican primary and Democratic President Joe Biden in a hypothetical 2024 re-match.

Republican Representative Liz Cheney of Wyoming, the panel’s vice chair, called Trump’s conduct “an utter moral failure and a dereliction of duty” that renders him “unfit for any office.”

The committee vote is to be accompanied by a detailed final report on its investigation, laying out a case for Trump’s culpability for the mob attack. The committee has accumulated evidence including interviews with more than a thousand witnesses that it also plans to share with prosecutors and the public.

Democratic Representative Zoe Lofgren of California, another panel member, said the panel uncovered evidence of attempts to influence witnesses. She cited on instance in which a witness was offered financial benefits ahead of testifying but those offers were withdrawn after her testimony was reported.

“We believe these efforts may have been part of a strategy to prevent the committee from finding the truth.” Lofgren said.

Hearings the committee held over the spring and summer regularly dominated their television time slots, with riveting insider accounts punctuating a case against Trump and key associates. Several publishers plan to rush out custom editions of the committee report in anticipation of reader interest. The panel also plans online multimedia presentations to amplify the impact of its findings.

Any subsequent conviction on an insurrection charge would complicate Trump’s reelection effort. Under the Constitution’s 14th amendment, anyone who has previously taken an oath to support the Constitution — which presidents and members of Congress must do — is barred from federal office if they engage in insurrection.

But it’s not clear exactly how that section of the Constitution would work in practice, especially in a nationwide presidential race. The Constitution doesn’t spell out a uniform process for pursuing disqualification. Recent challenges under the 14th Amendment to a candidate appearing on the ballot have unfolded on a state-by-state basis. Congress failed to act this year on proposed measures to create a standardized process aimed at avoiding legal chaos.

The insurrection disqualification is also a relatively untested area of the law, and any effort to keep Trump off the ballot is likely to trigger a fierce court fight.

No sitting or former president has ever been tried for a crime, though Ulysses Grant was arrested and fined $20 while president for speeding down a Washington street in his horse and buggy. President Gerald Ford preempted charges against Richard Nixon with a pardon following the Watergate scandal.

At the end of his presidential term, Bill Clinton agreed to a five-year suspension of his Arkansas law license and $25,000 fine in a deal with independent counsel Robert Ray not to bring criminal charges against him for lying under oath about his affair with Monica Lewinsky.