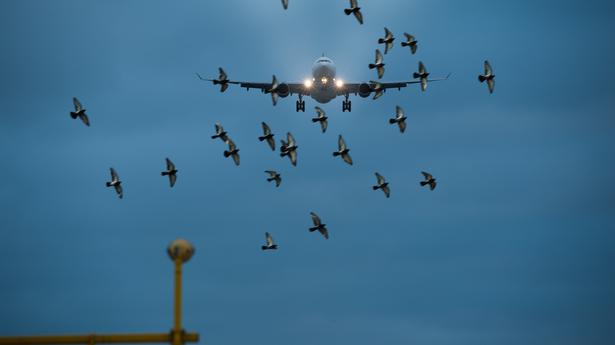 When are aircraft more prone to bird strikes? How is the DGCA planning to prevent such incidents?

When are aircraft more prone to bird strikes? How is the DGCA planning to prevent such incidents?

The story so far: On June 19, a SpiceJet Boeing 737-800 on the Patna-Delhi sector (SG723) with 185 passengers was in the climbout phase (the period immediately after take-off during which the aircraft climbs to a predetermined cruising altitude) when it suffered a bird hit in its left engine. Ensuing visuals showed flame streaks. The engine was shut down and the flight returned to Patna about 20 minutes later. The same day, an Indigo Airbus A320N (6E-6394, Guwahati-Delhi) was taking off when it experienced a bird hit in the left engine. The aircraft returned to Guwahati about 15 minutes after its departure. In both incidents, some of the engine blades were damaged or had fractures. India’s civil aviation regulatory body, the Directorate General of Civil Aviation (DGCA), has ordered an inquiry. Further, in a directive to all airport operators, it has asked all airports to “review their wildlife hazard management plans” for “within and outside the airfield”. Being the monsoon season with heightened wildlife activity, this would include grass trimming, runway inspections, garbage disposal in operational areas and ensuring water drainage.

What is the data on bird strikes?

The International Civil Aviation Organization (ICAO) has been collecting bird strike data since 1965, but it was in 1979 that it requested member states to begin reporting bird strikes to aircraft into a data entry and retrieval system. The ICAO Bird Strike Information System (developed with the help of experts) has been in operation since 1980. An analysis of 62,416 verified records showed that most hits were in or near airports during the take-off and approach phases of flight. About 60% occurred at or below 30 metres or around 100 feet, according to a paper on the ICAO bird strike information system. Another paper, “Bird strikes at commercial airports explained by citizen science and weather radar data”, says that in 2017, “over 14,000 bird strikes were reported only in the United States; for that year alone, the cost was $142 million”. A third paper, “The costs of bird strikes and bird strike prevention”, by Allan J.R., says that, globally, “the annual costs of bird strikes are an estimated $1.2 billion”. Scientists from the Cornell Lab of Ornithology and partners say that information on bird movements throughout the year can help avoid aircraft damage and risk to passengers. In 2018, the Federal Aviation Administration data on civilian flights in the U.S. recorded 14,661 collisions with wildlife, which is over 40 cases a day.

How is it from a pilot’s perspective?

A senior commander who flies the Airbus A320 aircraft told The Hindu that bird hits are a risk that flight crew have to be constantly ready for, especially during the take-off phase as the aircraft is fully loaded and fuel-laden. If a bird hit is suspected, the crew have to watch all parameters. There are the usual places where the crew knows the bird hit has occurred, i.e., the windshield, the belly and the engines. Damage to the engines can vary with twisted fan blades, blade separation and vibrations. This could result in an engine imbalance as well. Apart from this there can be damage to the wing surfaces (flaps, spoilers and slats) and the airframe too. This results in huge losses for the airline operator.

He added that there are crew standard/operating procedures laid down by the manufacturers and the airline company, followed by simulator checks. He said adherence to wildlife management rules is imperative within and around the airport and its vicinity.

What is the perspective from experts? What is being done to help minimise instances of bird hits?

Captain A. (Mohan) Ranganathan, a former airline instructor pilot and aviation safety adviser — he brought out a bird strike handout when he was part of the Bird Strike Committee in 2011 — told The Hindu that the recent bird hit incidents show that all areas surrounding an airport ought to be clear of slaughter houses and garbage dumping (factors which can attract wildlife and increase risks). Airports are also expected to have incinerators to dispose of garbage removed from aircraft. The expert said that airlines are supposed to have some standard operating procedures for bird strike prevention. He added that for pilots, it is important to have constant monitoring. After lift-off, the pilot flying should have his eyes on the instruments and the pilot not flying has to have his/her eyes outside to look out for birds. This has to be emphasised during training. Finally, he said, understanding bird behaviour is something crew and operators need to be familiar with. Close to the ground, the instinctive response of birds is to get away from the aircraft path. Bird strikes occur when pilots try to climb over them during the initial take-off phase. Birds get sucked into an engine as an aircraft engine’s field of ingestion is quite high with take-off thrust. Over 100ft, birds tend to dive to avoid an aircraft. Therefore, it is important to understand bird behaviour.

The Hindu also spoke to Dr. P. Pramod, Principal Scientist, Salim Ali Centre for Ornithology and Natural History (SACON), Coimbatore, which is a Centre of Excellence under the Ministry of Environment, Forest and Climate Change. SACON has been closely associated with the Airports Authority of India (AAI) and the Indian Air Force (IAF) as bird hits affect both organisations. From 2017-2020, SACON undertook a study of air hazard issues at three airports — Coimbatore (Tamil Nadu), Ahmedabad (Gujarat) and Kannur (Kerala). An analysis of the ecosystem (a radius of 10 km) revealed that the problems are not the same everywhere.

SACON has now expanded the study to 12 airports across India based on a memorandum of understanding signed in February 2020 with the AAI. A similar arrangement is being worked out with the IAF. SACON is to start a series of training programmes from August 2022 involving airport bird hazard management teams. The scientist says that it must be noted that each airport in India has its unique ecological setting and therefore the solutions are different. For example, if there are 60 avian species that could be around an airport, only five to six could pose a problem. A study of birds over a year would lead to a specific list of recommendations on how to handle the dynamics of these species. There are good results in airports where there is 100% implementation.

Highlighting an example, he said that in Coimbatore, 90% of bird hits involved the lapwing, a ground-nesting bird. It was found that the species was using the airport area as a nesting ground, seeking the open soil stretches near the runway. SACON recommended reintroducing grass in these areas as it was an instance of habitat management. SACON has also worked on engineering solutions at airports and surroundings to keep problematic birds at bay.

As far as bird hits are concerned, Category I hits, which involve large birds such as kites that are dangerous to aircraft, are on the decline. It is hits that involve small birds that are on the rise now, he added. In civil aviation, it has been observed that a height of 100 metres is usually where most of the hits occur when the aircraft is in either the take-off or landing phase.

In the Indian scenario, a proper database needs to be developed that collects essential details such as the bird species, the height of occurrence and exact geospatial coordinates.

The scientist also highlighted SACON’s National Avian Forensic Laboratory which can identify the bird species using just blood samples, tissue and feathers (through DNA and feather microstructure) — which is usually what aircraft engineers get from a bird-hit aircraft. He added that SACON was reaching out to Indian airports on the need to ensure proper forensics and a data reporting and management system.

Following two back-to-back bird strikes incidents, the Directorate General of Civil Aviation in a directive to all airport operators has asked all airports to “review their wildlife hazard management plans” for “within and outside the airfield”.

An analysis of 62,416 verified records by the International Civil Aviation Organization’s (ICAO) Bird Strike Information System showed that most bird hits were in or near airports during the take-off and approach phases of flight.

The Salim Ali Centre for Ornithology and Natural History has now expanded a study of air hazard issues to 12 airports across India. Its studies show that each airport in India has its unique ecological setting and therefore solutions are different.