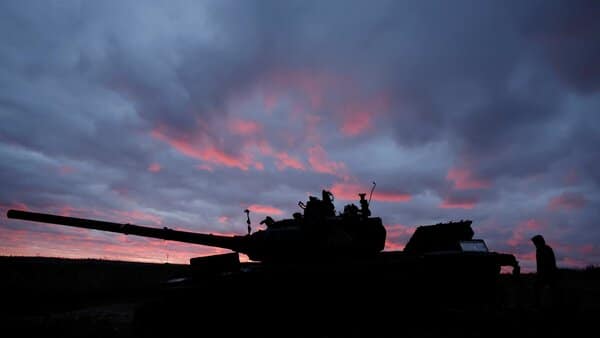 The strike comes days after Russia blamed Ukraine for a drone attack on its Black Sea Fleet, CNN reported.

“Explosions and air raid sirens were heard in Kyiv early on Monday and 80 per cent of residents were left without water – with many losing electricity, too – following power outages caused by Russian strikes, the capital’s mayor, Vitali Klitschko, said on Telegram.

Ukraine is under massive blackouts and the residents are under severe water shortages as one of the strikes hit an energy facility that powered 350,000 apartments in the capital, CNN reported citing Klitschko who further added that emergency services are making every effort to stabilize the situation.

Moreover, strikes were also reported in the southern region of Zaphorizhzhia as well.

Kyiv’s mayor, Vitali Klitschko also urged the war-torn country’s citizens to stock up water as the situation is worse.

“Currently, due to damage to the energy facility near Kyiv, 80% of the capital’s consumers remain without water supply,” he said on Telegram. “Just in case, we ask you to stock up on water from the nearest pumps and points of sale. Specialists are doing everything possible to return water to the apartments of Kyiv residents.”

CNN reported quoting Ukrainian Foreign Minister Dmytro Kuleba that Kyiv has already finished agreements with at least 12 countries to obtain nearly 1,000 units of power equipment, including generators and the country is , at present, in touch with European Union (EU) and NATO.

Power outages caused by Russian attacks continued in Kyiv over the weekend. Klitschko said earlier it will take weeks to repair electrical systems.

Russia suspended its participation in an UN-brokered grain deal viewed as key to addressing the global food shortage, according to the country’s defense ministry.

Moscow announced it was leaving the deal after blaming Ukraine for a drone attack on Crimea Saturday. Kyiv accused Russia of inventing “fictitious terrorist attacks” and using the deal as “blackmail.”

By Sunday, more than 200 vessels had been blocked from making shipments, Ukraine said. A growing number of Kyiv’s allies condemned Moscow’s move. (ANI)