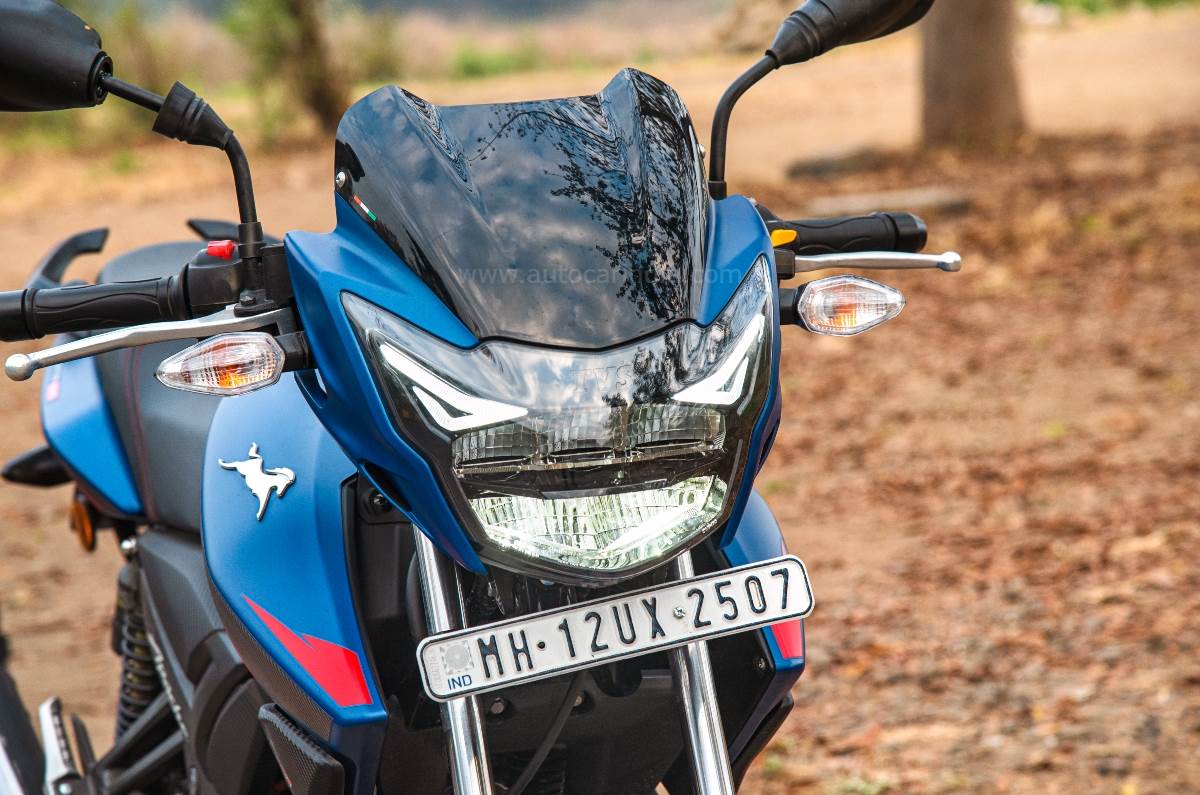 The Apache RTR 160 2V has been around for well over a decade and has received its most comprehensive update yet.

Circa the early 2000s. The world as we know was starkly different to what it is today and the same could be said about the Indian motorcycle industry as well. Back then, yours truly was a typical college going kid with a deep love for motorcycles that appealed to the “enthusiast”. Choices were few, pockets were shallow and bikes like the TVS Apache RTR 160 satiated the wants of our kind.

To say that I had a great time astride a friend’s bright orange TVS Apache RTR 160 Fi (yes, fuel injection was a big deal back then), would be an understatement. Which should also probably explain why I was eager to ride the recently and comprehensively updated Apache RTR 160 2V. Does it still manage to strike a chord with the young or in my case, middle-aged enthusiast?

TVS certainly thinks the RTR 160 2V makes a case for itself, even after being around for well over a decade. The sales numbers and the fact that this motorcycle constitutes 30 percent of TVS’ 160cc motorcycle sales explains why this bike has received a slew of updates.

Cosmetically, there’s a new LED headlight, which I must add, does a brilliant job of illuminating a dark highway. A set of new graphics, colours and a redesigned LED tail-light have all helped enhance the bike’s appearance. To my eyes, this is a good looking bike, even after all these years. The Gen Z boys in the team, like Soham, didn’t agree with me. Well, when it comes to design, as they say, to each his own.

Mechanically, TVS has managed to squeeze a little more power from the air-cooled engine, which now makes 16.04hp at 8,750rpm; up from 15.53hp at 8,400rpm. Peak torque, however, has dropped a wee bit, from 13.9Nm to 13.85Nm. Along with the minor bump in horsepower, TVS has also shaved 2kg off the bike’s kerb weight and that helps the bike’s power to weight ratio.

For the sake of improved handling, the bike also gets a fatter, stickier TVS Remora tyre at the rear. 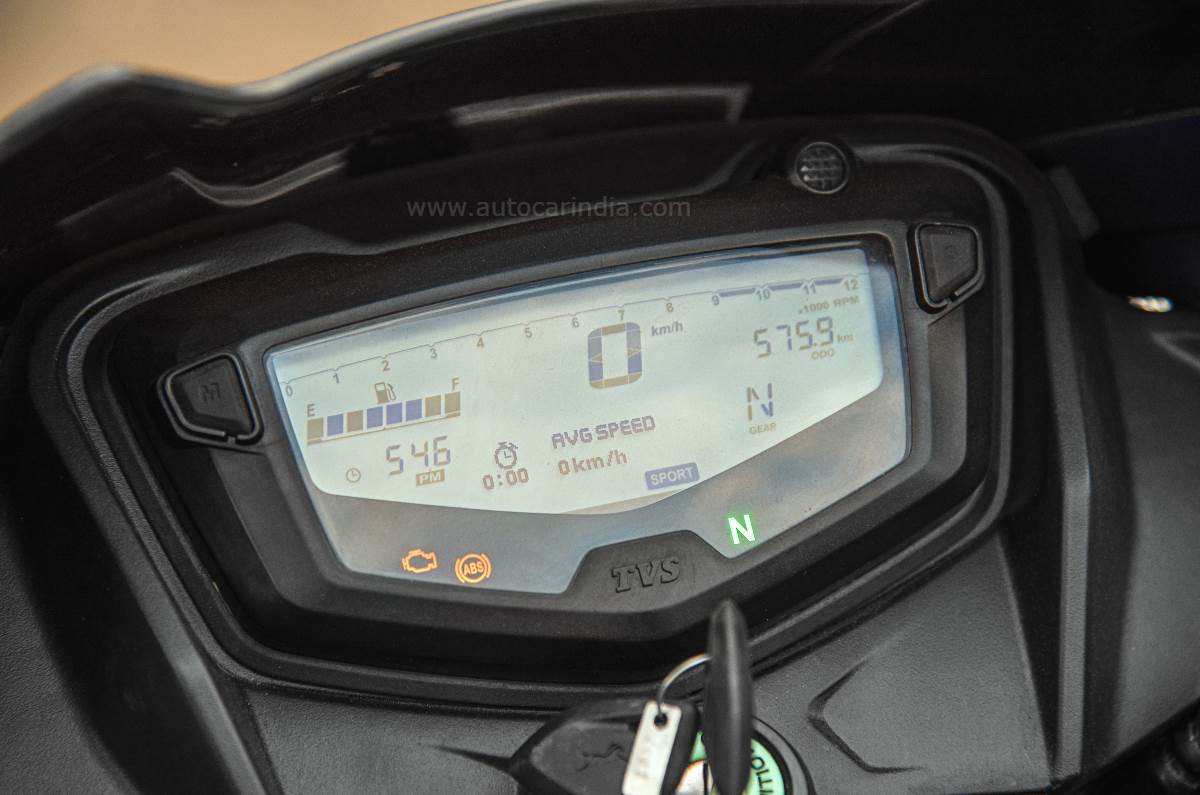 Lastly, TVS has taken the RTR 160 4V’s digital instrument cluster and put it on this bike, replete with Bluetooth connectivity, turn-by-turn navigation and more. In all, they’ve done everything possible to make an over 15-year old motorcycle as up to date as it can be. But what effect have all of these updates made on the motorcycle?

The Apache 160 engine has always had a lively, punchy nature and that’s true in the case of this 2022 avatar as well. In Sport mode, the throttle response is quick, the acceleration is brisk and we managed to see a top speed of 120+kph on the dash. From a standstill, the bike crossed 60kph in a shade under 5 seconds while the 0-80kph sprint was dispatched in 8.76s only. All said, performance begins to taper as the bike nears the 100kph mark and the bike takes 17.37s to get there from a standstill. 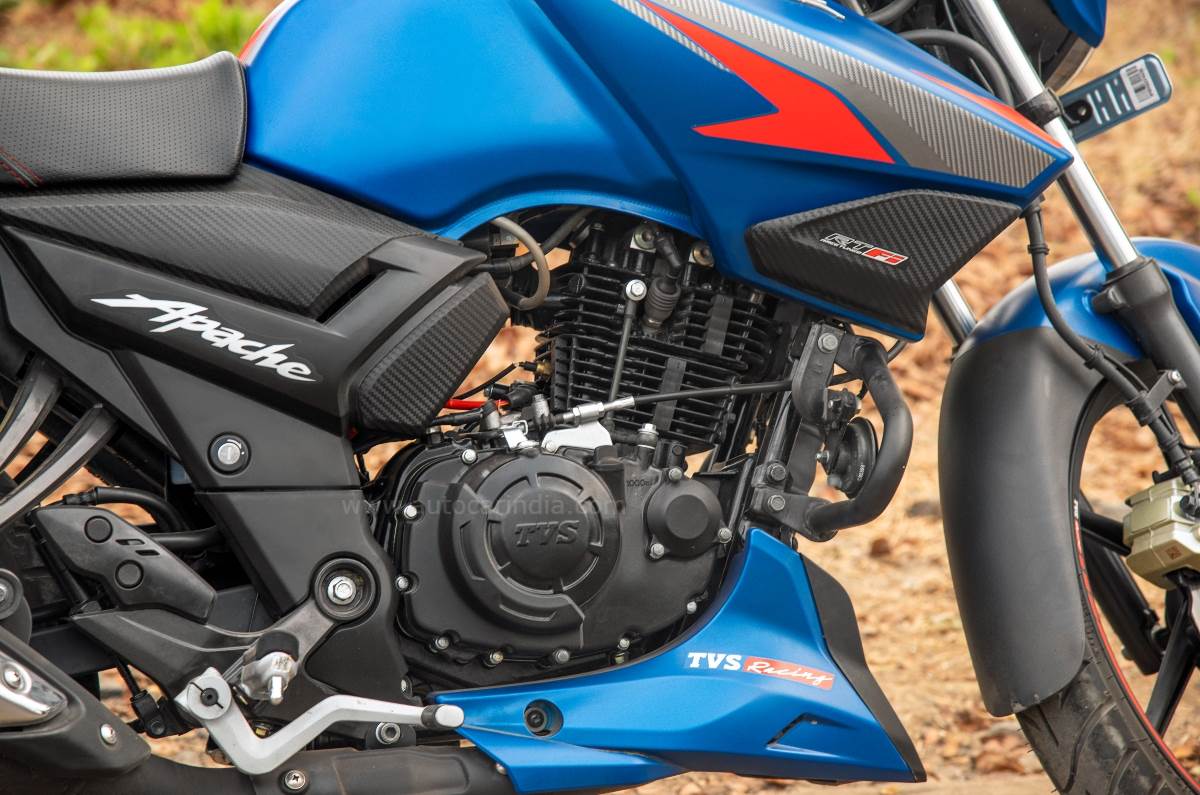 Nevertheless, that’s pretty good performance for such an old bike, even in comparison to modern bikes in this segment. For reference, the RTR 160 2V is nearly as quick as the Apache 160 4V and faster than the Bajaj Pulsar N160 in the run upto 60kph and 100kph. What helps the RTR 160 2V achieve such performance is not only the engine, but also its significantly lower kerb weight (at 138kg) compared to the aforementioned bikes.

Switching to Urban or Rain mode makes a notable difference to the performance of the motorcycle, without it feeling underpowered at any point. The benefits of having a dedicated mode for riding in city traffic is also seen in the impressive 53.1kpl that the Apache manages in the city. However, the fuel economy we registered while riding the bike on the highway, in Sport mode, was lower at 46.44kpl.

All said, the effective Urban mode along with TVS’ Glide Through Technology or GTT made the Apache an easy-to-ride commuter in the city.

But, as good as the engine is, it isn’t as refined as most of the other motorcycles in the segment. In fact there’s a strong buzz that can be heard and felt in the pegs, handlebar and the headlight cowl. I distinctly remember my friend’s RTR 160 FI being a vibey motorcycle too, although, it must be said that the 2022 bike isn’t as bad as the old bike. Still, this is the biggest reminder of how old this bike is.

The moment you seat yourself on the rider’s perch, the Apache’s extremely compact ergonomics put you in a sporty, but cramped riding position. It’s just about alright if you’re short and thin as Soham and Zaran. Not so if you’re as well fed as me or as tall as 6-feet plus Rishaad, who felt quite cramped.

To be honest, the riding position took some getting used to and it never really feels right. But soon, I began enjoying the ease with which the compact dimensions of the Apache fit through the narrowest of gaps in traffic. The short, 1,300mm wheelbase also makes the bike highly flickable too and I was reminded of why this Apache was a hot favourite among college kids who loved a motorcycle that handled well. 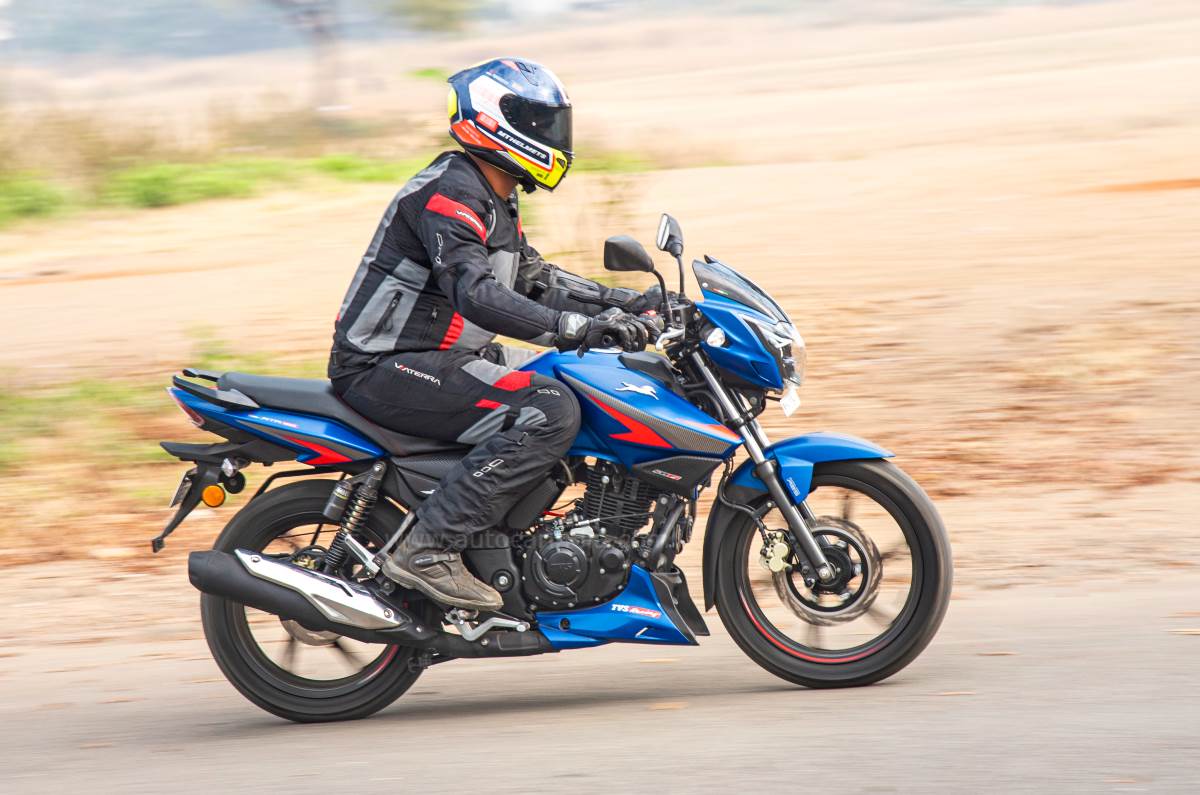 On the flipside, the suspension is clearly old-school in today’s day and age. The bike’s conventional telescopic fork and gas-charged twin-shock set-up offered a decent ride over most bumps but the front end was quite soft, to the point where it bottoms out when hitting sharp edged bumps or aggressive speed breakers.

That, along with the fact that Mumbai’s roads are currently in the worst state than they’ve possibly ever been, means ride quality isn’t the bike’s strong suit.

Lastly, the braking performance is decent at best and while the feedback through the lever is good, the front brake could do with a stronger initial bite.

There’s no denying that the TVS Apache RTR 160 2V has grown a little long in the tooth. Timely updates, with the latest one being the most comprehensive, have helped to some extent in keeping this bike feeling relevant 17 years after it first came out, but they’ve come at a significant cost. At a starting price of Rs 1.17 lakh and Rs 1.24 lakh, for the top variant we’ve got on test, it sits tantalisingly close to the Apache RTR 160 4V (Rs 1.21 lakh-1.30 lakh), which is a vastly superior motorcycle in terms of refinement, comfort and dynamics. But you can’t blame TVS for keeping this bike alive either, because the demand for it is still very strong in some parts of the country. 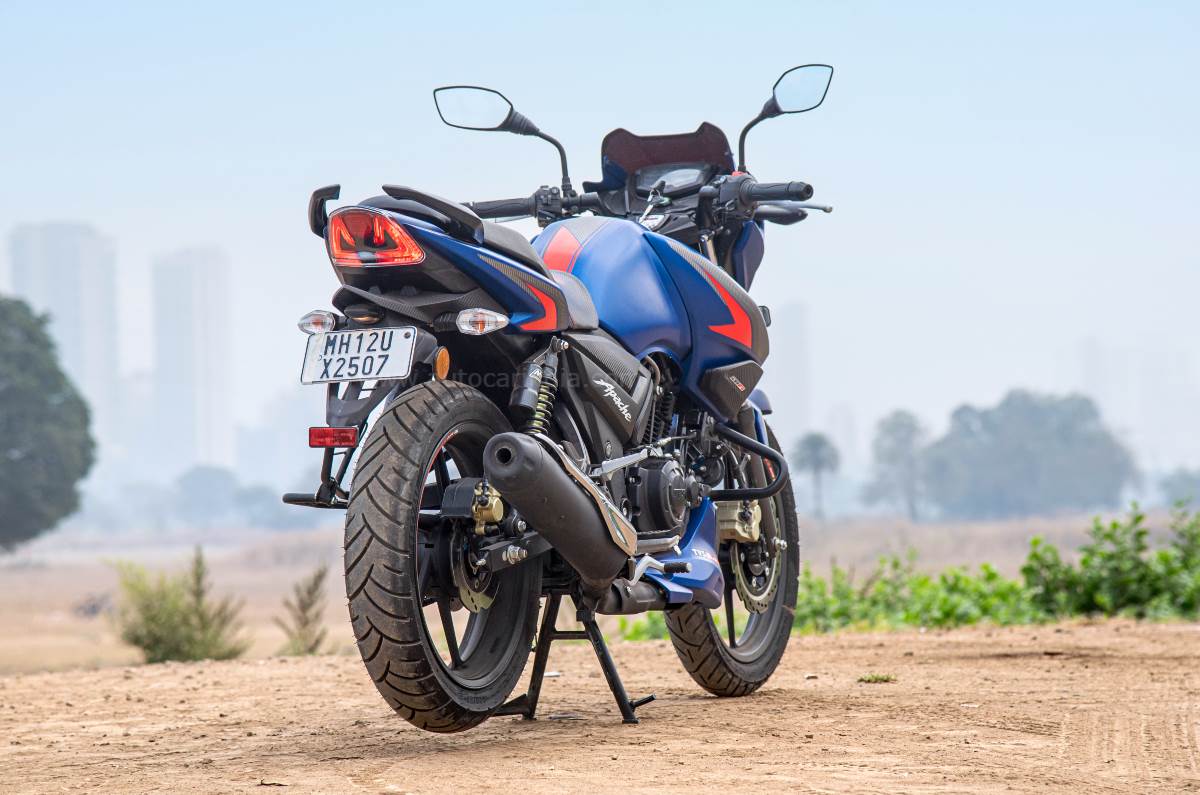 What is it then that’ll make one put the money down on the RTR 160 2V? To me, it’ll have to do with the fact that this is still one of the quickest, most agile bikes in the segment, not to mention the sheer brand value it has built over time. It would appear that that is what makes it appealing to those willing to look past its glaringly obvious age.