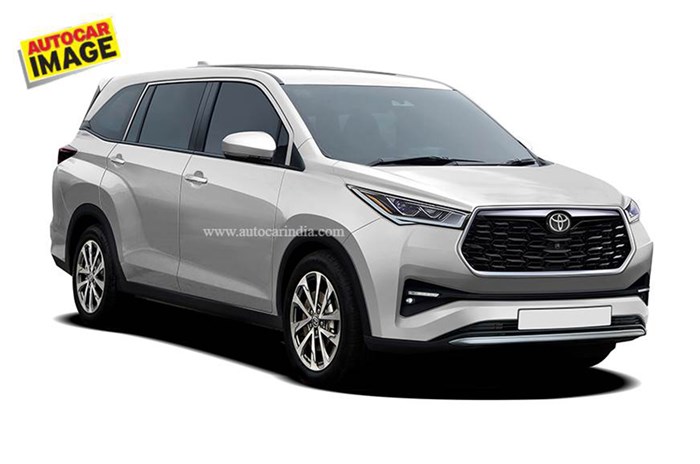 Ahead of its India debut on November 25, fresh new spy shots of the upcoming Toyota Innova Hycross have emerged giving us a sneak peek into the MPV’s dashboard.  Also visible in the spy pictures is the large panoramic sunroof, first revealed in the 3D renderings of the Innova Hycross. The three-row MPV will first make its debut in Indonesia where it will be called the ‘Innova Zenix’.

As seen in the new spy shots, the Innova Hycross will have a multi-layered dashboard design. While the dashboard looks unique, the center console, the steering wheel and the instrument cluster seem to look like the one that also sees duty on the latest-gen Toyota Voxy MPV that is sold in some international markets.

The dashboard and aircon vents get a silver finish, and what stands out here is the large floating touchscreen. Toyota appears to have given a separate panel for climate control, but no physical buttons are visible, hinting that it will have touch-sensitive HVAC controls. There’s also a large recess on the passenger side for storage, just above the glove box.

The Innova Hycross also gets a dashboard-mounted gear lever console, which frees up space between the front seats.

While it is hard to make out the colour combination, it is likely that the Innova Hycross will have dual-tone interiors, and Toyota could use the black and brown combination as they did on the Urban Cruiser Hyryder SUV.

In terms of equipment, it is expected to get features like a 360-degree camera, wireless charging and an ‘ottoman function’ for added comfort in the second-row captain chairs.

Toyota Innova Hycross: what will it look like on the outside?

Going by the recently released official teaser and leaked design renderings, it is evident that Toyota is aiming at a crossover-like styling for the new-gen Innova. It will come with a large and upright hexagonal grille, which looks similar to the one seen on the Corolla Cross SUV sold overseas.

Some of the other design highlights at the front include wide headlamps with two L-shaped inserts and strong creases on the bonnet. On the side, it will have a similar silhouette and glasshouse as the Innova Crysta except for the rear quarter glass area. While we are yet to see the rear of the Hycross, previous spy pictures have revealed an upright tailgate and horizontally oriented tail-lamps.

The new Innova Hycross will not get a diesel engine, and instead, it will be powered by a naturally aspirated petrol and a strong hybrid powertrain with a 2.0-litre engine.