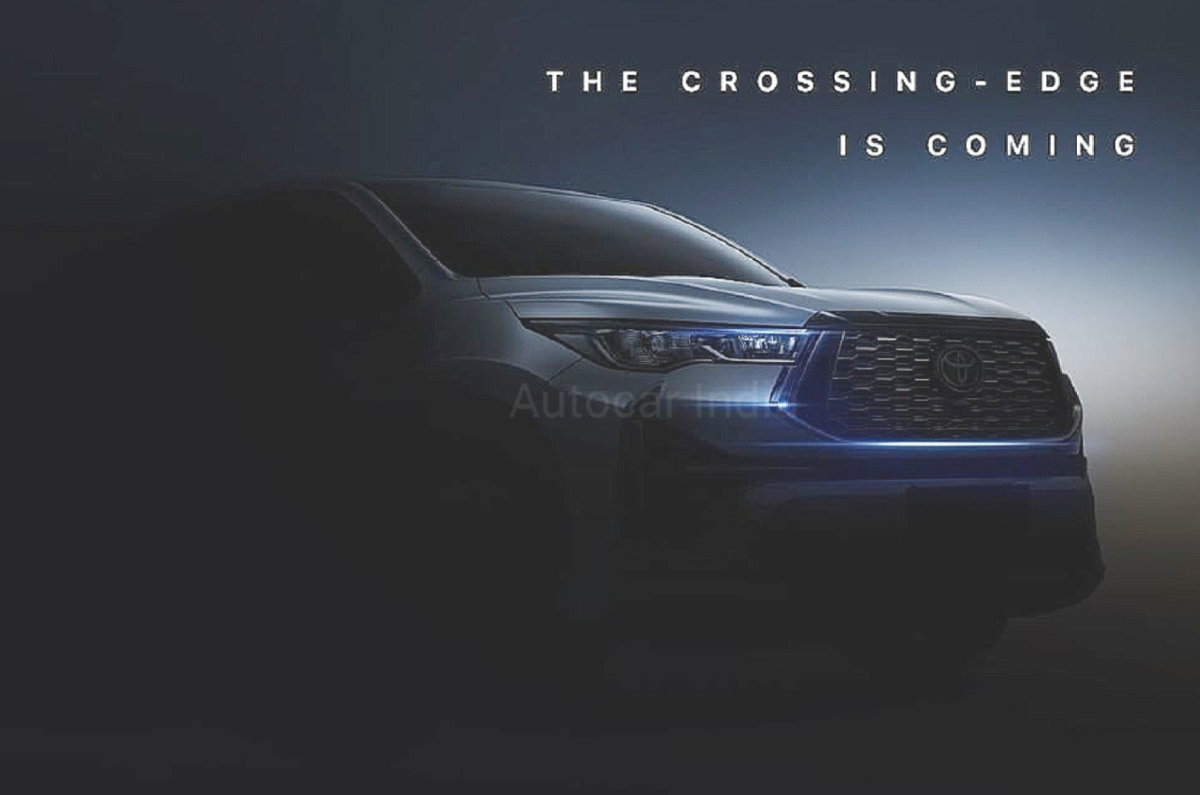 Ahead of its global debut next month, Toyota Indonesia has released a teaser image of the upcoming Innova Hycross. The image shows the front end of the new three-row MPV and there are visible styling cues like the grille from Toyota’s global models like the Corolla Cross.

The new Toyota Hycross will be a global model and it will be sold in overseas markets like Indonesia, where it is most likely to be called the ‘Innova Zenix’. The India debut of the model will follow the global unveiling, which is expected to take place in Indonesia.

Toyota Innova Hycross: what does the teaser image reveal?

The teaser image shows only the front end of the car and prominent here is the large and upright hexagonal grille, which looks similar to the one in the Toyota Corolla Cross. Also visible is the wide headlamp with two L-shaped inserts housing the main light units. Its bonnet features strong creases and the bumper gets triangular housings for the fog lamps. The front design of the car clearly shows the new MPV’s intent to look more like a crossover.

Recently, the Hycross was spotted testing and the spy pictures gave us an idea of how it would look from other angles. The spy pictures show that the MPV gets horizontally oriented tail-lamps with LED brake lights, and at the side, it gets 10-spoke alloy wheels.

As far as the dimensions go, the new Innova Hycross will be around 4.7 metres in length with a wheelbase of 2,850mm. This makes it slightly larger than the Innova Crysta. It will continue to have space as its USP and Toyota will offer multiple seating options like the existing model.

The upcoming Innova Hycross is expected to have a much longer equipment list, with features like a 360-degree camera, sunroof, wireless charging, and even an ‘ottoman function’ for the captain’s chairs in the second row. The recent spy pictures also show a large touchscreen infotainment system.

For the first time, the Innova will be available with monocoque architecture and a front-wheel-drive layout. All the previous iterations of the MPV were based on ladder-frame construction and rear-wheel-drive set-up. The monocoque architecture will enable the Hycross to get a flat floor at the rear, which will liberate more space. The Innova Hycross will be based on Toyota’s modular TNGA-C platform that also underpins the current-gen Corolla sold abroad.

Toyota Innova Hycross will not get diesel

As we have reported before, the Innova Hycross will not get a diesel engine, and will only be available with petrol-hybrid powertrains, similar to the recently launched Toyota Urban Cruiser Hyryder. However, for the strong hybrid powertrain, the Innova Hycross will use a bigger 2.0-litre unit instead of the 1.5 seen on the Hyryder. The heavily localised hybrid technology, however, will be the same as seen in the Hyryder, to help keep costs in check.

Toyota Innova Hycross will have a Maruti derivative

As reported before, the Innova Hycross will be rebadged for Maruti Suzuki and sold through the Nexa line of dealerships. Like other cross-badged products from the alliance, expect Maruti’s version of the Hycross to have distinct styling features, like a unique grille and a different design for the headlamps and tail-lamps, and some subtle changes on the inside. It will sit on Toyota’s TNGA-C platform and will share the Innova’s powertrains.

The Hycross will debut sometime in November, with a price announcement to take place early next year. It will be sold alongside the Innova Crysta, which is currently available only with a petrol engine.