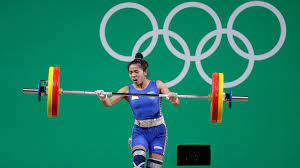 Saikhom Mirabai Chanu won India’s first medal in the Tokyo Olympics 2021 today, claiming silver in the women’s 49kg weightlifting. Mirabai had a total lift of 202kg – 87kg in snatch and 115kg in clean and jerk as she finished second behind China’s Hou Zihui 210kg (94 & 116) who set an Olympic record in snatch.

Saurabh Chaudhary’s failed to win a medal match in 10m Air Pistol as he finished seventh. For the first time, 19-year old Chaudhary was not able to end a event with a podium finish.

Mirabai Chanu was a medal contender in the women’s 49 kg, having set a new world record in clean & jerk by lifting 119kg in the Asian Weightlifting Championship at Tashkent in April 2021.

Deepika Kumari and Pravin Jadhav’s mixed team has stormed into the quarterfinals after winning the first match against Chinese Taipei but failed to overcome Korean challenge in the quarterfinals.

Indian men’s doubles pair of Satwiksairaj Rankireddy and Chirag Shetty dished out a sensational show to beat the world no. 3 pair of Yang Lee and Chi-Lin Wang of Chinese Taipei in a thrilling group A match to make a superb start to their maiden Olympic campaign here on Saturday.

Chirag and Satwik, world no. 10, notched up a stunning 21-16 16-21 27-25 win over third seeds Lee and Wang, who had claimed back-to-back titles at the Yonex Thailand Open, Toyota Thailand Open and BWF World Tour Finals earlier this year.

Satwik and Chirag matched their fancied rivals both in attack and defence during the one hour and six minute contest, which turned out to be an edge-of-the-seat thriller.

The Indian duo ran-up a 7-2 lead early on, before entering the break at 11-7. Satwik and Chirag continued to move ahead and eventually grabbed the opening game.

In the second game, it was Lee and Wang who converted most of the opportunities but the Indian duo managed to keep breathing down their neck at 8-10. After the interval, the Chinese duo changed gears and soon bounced back into the contest.

In the decider, the Indian pair enjoyed a slender 2-0 lead, which was quickly erased by their rivals. The two pairs moved neck-and-neck from there on till 10-10.

A net error by Satwik allowed the Chinese Taipei pair to held a one-point lead at the break.

The live streaming of Olympics 2021 will be available on Sony LIV APP and Website.