The Man Who Fell to Earth Premiere Review – “Hallo Spaceboy” 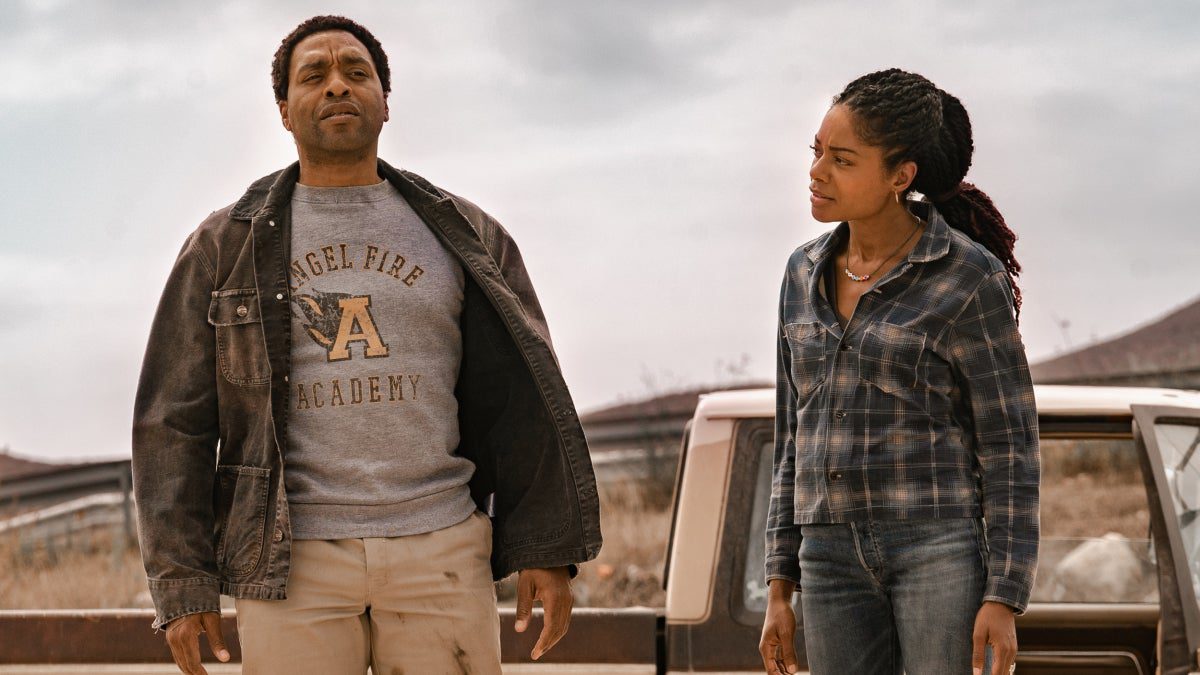 The 1976 David Bowie film The Man Who Fell to Earth followed an alien from a drought-stricken world who journeyed to Earth looking for help, using his tech savvy to amass great wealth and build a spacecraft to travel home. The plot feels prophetic amidst news of megadroughts and a billionaire space race, yet the premiere of Showtime’s sequel series The Man Who Fell to Earth does little to make a case for its own relevance.

“Hallo Spaceboy” (all of the season’s 10 episodes are named for Bowie songs) is framed by the alien called Faraday (Chiwetel Ejiofor) giving a sort of TED Talk to an extremely hyped-up crowd of disciples. In a scene against gorgeous images of his journey through the cosmos and physical transformation from a reptilian creature to a human, Faraday promises to share the story of how he became a tech god and to introduce a game-changing new technology.

The cliche is used to try to add shape to what is otherwise an episode mostly filled with fish-out of-water absurdity that combines bits of the original Thor and Resident Alien but without as much clever humor or warm humanity. Ejiofor’s alien lands in New Mexico and is quickly arrested for wandering around naked and drinking out of a garden hose. The scene is largely played for laughs even though later moments in the episode more pointedly focus on the danger Faraday faces just by walking around in a Black body.

Faraday struggles with learning English in a goofy way Bowie’s Thomas Newton didn’t have to, exaggeratingly repeating words and noises and picking the name Faraday from an officer’s name tag. The strutting moral ambiguity of a tech bro is comfortable territory for Ejiofor, but he doesn’t quite sell the silliness of the character he’s playing in Episode 1.

The alien has come to Earth seeking the scientist Justin Falls (Naomie Harris), eager to help her finish a fusion project she abandoned to take care of her ailing father, Josiah (Clarke Peters). The script bluntly drives home some extra themes by noting that her dad was a brilliant immigrant but he’s been abandoned by his adopted country’s broken health care system, leaving Justin to rely on drug dealers to get him the medicine he needs. To save his planet, Faraday will need to restore Justin’s faith in herself and in humanity in general!

That gets off to a slow start as Justin initially wants nothing to do with this very strange stranger, only bailing him out after realizing he’s far too naive to take care of himself after he’s beaten up and robbed for walking down the street carelessly scattering money. In the original, Newton sells his wedding ring to get some seed money soon after arriving on Earth, a poignant sign of abandoning his old connections to start a new life. Here, Faraday inexplicably vomits out dozens of similar rings to pawn. It’s a reference that is both bizarre and stripped of all emotional resonance.

Special effects are not a substitute for vision.

Yet the wads of cash are enough to get Justin to grudgingly agree to drive him to get a message he needs to continue his mission while he badgers her about continuing her work and she tries to work on his social skills. When his awkwardness gets them unwanted attention at a diner, he explains to a server that “he’s on the spectrum,” which Justin then explains to Faraday means he has different social skills and can’t connect. That’s a pretty questionable definition, broadening the term beyond actually having a form of autism to just being anyone who struggles socially.

Creators Jenny Lumet and Alex Kurtzman seem to think that their version of The Man Who Fell to Earth can improve on Nicolas Roeg’s film with bigger spectacle, replacing his bleak sandy vision of the planet Althea and the white plastic suits his aliens wore with CGI landscapes with towering cloud seeders and a more Dune-inspired getup for Faraday. But special effects are not a substitute for vision. At a time that TV and movies are glutted with alien worlds, Althea doesn’t leave much of an impact.

While the appearance of Bill Nighy’s version of Newton near the end of the episode hints at some promise, the show quickly heads back to that TED Talk stage with its grand promises of mysteries to be revealed. But while Faraday’s audience may hang on his every word, The Man Who Fell from Earth’s first episode lacks the same enthralling power.

The Man Who Fell to Earth is a series based on the classic sci-fi novel and film.