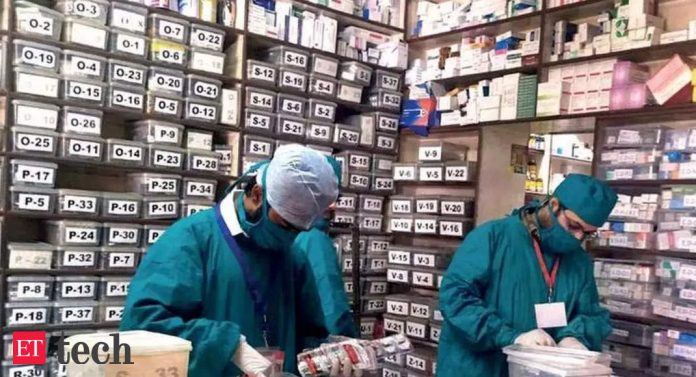 Bengaluru: Two of India’s biggest online pharmacies are going offline, as they look to have an omni-channel presence to widen their user base.

Tata-owned 1mg is set to open its first physical store in Gurugram next month while rival PharmEasy has started to expand across the offline channel through franchise stores, people briefed on the matter said. The two companies have taken different approaches in going offline, and it would be interesting to see how this pans out, they said.

This will put both 1mg and PharmEasy, which are known for their online presence, in direct competition with established offline brands like Apollo Pharmacy and Medplus.

PharmEasy is offering its name and branding to pharmacy retailers to set up these stores for which the company will get a commission on the sales. PharmEasy will also tap into its distribution network to supply products to these stores, people briefed on the matter said.

“They (PharmEasy) have started it in non-metros and have plans to scale it widely. The initial feedback has been encouraging and it is being tested more across these markets. But they don’t want to set up their own stores but do it through a franchise model,” one of the people said.

The franchise-store model from PharmEasy ties in with its broader strategy to bring in new users and offer them the full-stack health services, both online and offline. The company
acquired diagnostic chain Thyrocare Technologies for Rs 4,546 crore in June and
has been making other acquisitions like Aknamed, a cloud-based hospital supply chain management startup. Its parent, API Holdings,
filed for a Rs 6,250 crore IPO with the Securities and Exchange Board of India earlier this month.

“It will work on the take-rate model on all sales and they (retailers) get to buy from PharmEasy for assured supply. If it works, it will be scaled massively and could be big for the company in the long run,” a second person aware of the matter said. It is also planning to offer a click-and-pick model in the long term where consumers can pick medicines from the nearby stores after ordering it online through the PharmEasy platform.

For 1mg, too, its expansion in the offline channel is in line with parent Tata Digital’s plans to have an omnichannel presence of its online businesses. Last week, online grocer BigBasket, which is also owned by the Tatas, said it had
set up its own physical stores named Fresho for fresh supplies and that it will open 200 such stores by financial year 2023.

In an interview with ET in July, PharmEasy cofounder Shah had said the company wanted to offer key elements of healthcare—information, consultation, test and treatment—to all customers in India and that the Thyrocare acquisition was part of that plan.

Etailers like Flipkart and Amazon India are also experimenting with various models and partnerships to tap into new users through an offline presence as well as serve their existing users with faster deliveries.

PharmEasy, in its draft IPO papers, said it would use Rs 1,259 crore from the proceeds to fund organic growth initiatives, besides allocating Rs 1,500 crore on inorganic growth opportunities through acquisitions and other strategic initiatives. It plans to use Rs 1,929 crore to repay or prepay borrowings.

Stay on top of technology and startup news that matters. Subscribe to our daily newsletter for the latest and must-read tech news, delivered straight to your inbox.