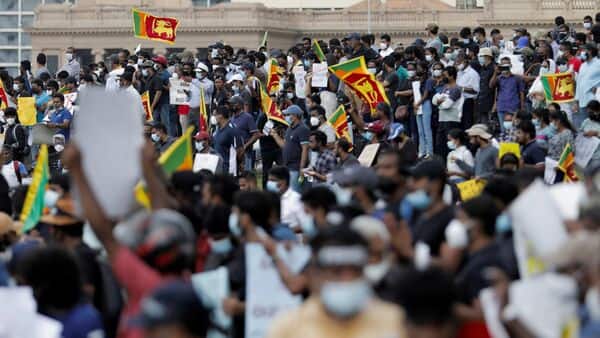 In the wake of unprecedented economic crisis, the cash-strapped island nation Sri Lanka’s central bank hiked interest rates by a record 700 basis points Friday as police fired tear gas at hundreds of protesting students.  Severe shortages of food and fuel, alongside lengthy electricity blackouts, have led to weeks of widespread anti-government demonstrations, with calls for President Gotabaya Rajapaksa to resign, as per AFP report.

Additionally, Sri Lanka’s main opposition party Samagi Jana Balwegaya (SJB) announced that it will move a no-confidence motion against President Gotabaya Rajapaksa’s government if it fails to provide immediate relief to the people of the island nation adversely impacted by the economic crisis, according to ANI report.

The latest protests saw students try to march to the national parliament on Friday. Monks, who had largely rallied the Sinhala-Buddhist majority to elect Rajapaksa at the November 2019 polls, were also seen joining demonstrations in the capital Colombo. Demonstrators nationwide carried placards saying “Gota go home”, demanding Rajapaksa and his administration step down over the country’s worst economic crisis since independence in 1948.

“We have decided to bring a no confidence motion against Sri Lanka president Gotabaya Rajapaksa as he fails to address the country in connection with economic policies. We have called a meeting with all opposition leaders and will take a final decision on it soon,” Sri Lanka Leader of Opposition, Sajith Premadasa told ANI.

Further, he said opposition MPs have also discussed that there should be an end to the Executive Presidency and power should be divided in Sri Lanka between the Executive, Legislature, and Judiciary.

Earlier, opposition leader Sajith Premadasa had said that Sri Lanka must abolish the all-powerful Executive Presidency and strengthen Parliament without paving the way to a similarly dictatorial premiership while ensuring adequate checks and balances.

Meanwhile, the Central Bank of Sri Lanka said its benchmark lending rate had been raised to 14.5% to “stabilise the exchange rate” after the rupee tumbled over 35% in a month. The rate for deposits was also increased by seven percentage points to 13.5% as reports said Sri Lanka’s rupee was the worst-performing currency in the world, edging out the Russian ruble.

“We are now in damage control mode,” Weerasinghe said at his first press conference since replacing Ajith Cabraal, who was virtually forced out Monday as the country was on the brink of bankruptcy.

Sri Lanka is battling a severe economic crisis with food and fuel scarcity affecting a large number of the people in the island nation. The economy has been in a free-fall since the onset of the Covid-19 pandemic.

Sri Lanka is also facing a foreign exchange shortage, which has, incidentally, affected its capacity to import food and fuel, leading to the power cuts in the country. The shortage of essential goods forced Sri Lanka to seek assistance from friendly countries.