More
HomeNewsSolar Eclipse today: When, where, how to watch, dos and don'ts |...
News

Solar Eclipse today: When, where, how to watch, dos and don’ts | Read here 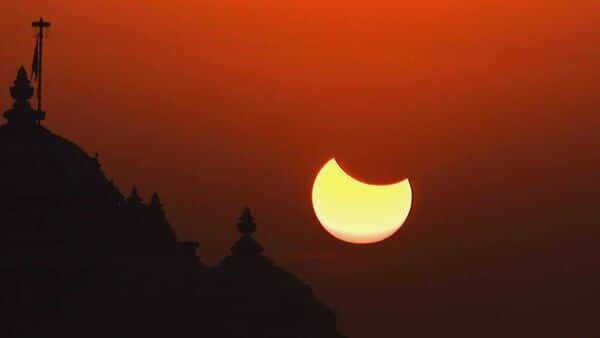 
Viewing the eclipsed Sun with the naked eye is not advised even for a very brief period of time. Even when the Moon blocks the majority of the Sun, it will still damage the eyes permanently and result in blindness.

What is solar eclipse and how does it occur?

Solar Eclipse or Surya Grahan occurs when the Moon comes between Sun and Earth and blocks the light of the sun, casting a shadow onto Earth. A that time, all three objects are in line, a solar eclipse takes place on a new moon day. When the lunar disc partially obscures the solar disc, there will be a partial solar eclipse.

Where to watch solar eclipse?

Several areas of the northeast like Aizawl, Dibrugarh, Imphal, Itanagar, Kohima, Silchar, and Andaman & Nicobar Island will not be able to see the solar eclipse at all.

What are timings of solar eclipse?

The solar eclipse will begin in India before sunset, in the afternoon, according to the Ministry of Earth Science. The end of the solar eclipse, however, will not be visible from India, the ministry said.

How to watch solar eclipse?

Directly watching a solar eclipse can cause permanent damage to one’s retinas because of high-density radiation from the sun’s photosphere.

Dos during an eclipse

1) The safest way to view the solar eclipse is either by using the right filter, such as aluminized Mylar, black polymer, welding glass of shade number 14, or by projecting the image of the Sun using a telescope onto a white board.

2) Before even looking up at the sky during a solar eclipse, NASA advises eye protection.

3) Drive with your headlights on during the eclipse.

Don’ts during an eclipse

1) It is never advisable to substitute regular sunglasses for solar viewing or eclipse glasses.

2) Avoid using your camera to record the eclipse. If you are not wearing the appropriate glasses, there is always a chance that the Sun’s intense rays will harm your eyes.

3) Keep kids away from eclipse viewing areas if you don’t plan to be there to supervise them.

When will next solar eclipse occur?