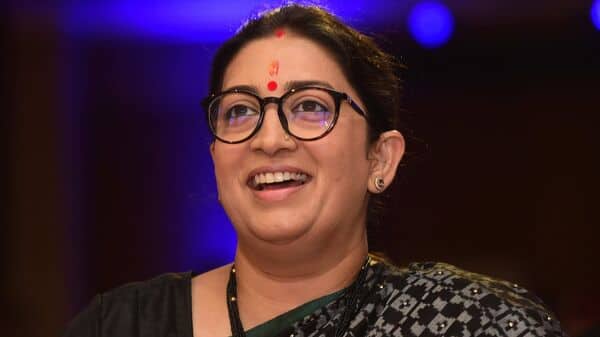 Union minister Smriti Irani has shared a video of her son Zohr’s graduation ceremony and wrote a special message for him. Overjoyed with Zohr Irani’s success, the former actress wrote, “Your graduation today Zohr Irani signals the advent of new possibilities.. to live your potential, to chase your dreams, to live and love responsibly, to be you .. just you … I’m proud, I’m overwhelmed, I’m overjoyed… love you much .. God bless”.

Smriti Irani married Zubin Irani in 2000. Together they are parents to children Shanelle, Zoish, and Zohr.

Last year, Irani’s daughter Shanelle got engaged to Arjun Bhalla recently. The Kyunki Saas Bhi Kabhi Bahu famed actress shared the news on Instagram along with some pictures. Irani shared one picture of Shanelle’s perfect proposal moment, the other photo was a selfie of the couple.

Sharing the photos, Smriti wrote, “To the man who now has our heart @arjun_bhalla welcome to our mad cap family … bless you for you have to deal with a crazy man for a father in law & worse .. me for a Saas … (you have been officially warned) God bless”.

Smriti Irani joined the Bharatiya Janata Party in 2003. In early 2010, Irani was appointed National Secretary of BJP and on 24 June, she was appointed All India President of the BJP’s women’s wing, BJP Mahila Morcha. In 2011, Irani was sworn in as a member of the Rajya Sabha (upper house of the Parliament). In 2014, Irani contested the general assembly election from Amethi against Congress leader Rahul Gandhi. At that time, Irani lost to Gandhi by 1,07,923 votes, a 12.32% margin. In the same year, Prime Minister Narendra Modi-led BJP government appointed her as the Minister of Human Resource Development in his cabinet. However, in the 2016 cabinet reshuffle, Irani was assigned to the Ministry of Textiles. In July 2017, she was handed the additional charge of the Ministry of Information and Broadcasting (India) when former Minister Venkaiah Naidu resigned from the ministry to take part in vice-presidential elections.

During the 2019 Lok Sabha election, Irani defeated Gandhi from the Amethi constituency. Irani is currently the youngest minister in the cabinet of Narendra Modi. She is also the first woman to hold office as the Union Minister for Human Resource Development and Union Minister of Textiles. She is also the youngest woman to be nominated to the Rajya Sabha.