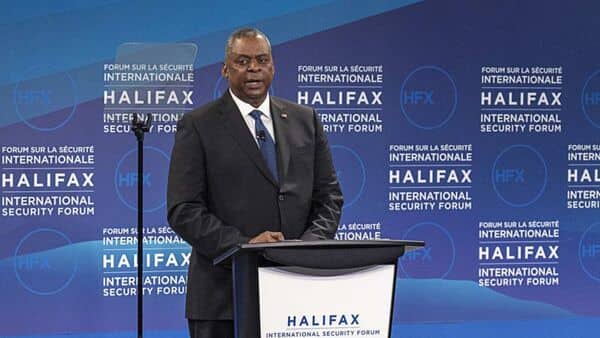 In a speech to a security forum in Canada on Saturday, U.S. Defense Secretary Lloyd Austin said that Russia’s invasion of Ukraine has provided a glimpse into “a possible world of tyranny and turmoil.”

Austin made some of his strongest statements to date about the necessity for the international community to support Kyiv’s victory after almost nine months of war.

Russian missile attacks on Ukraine’s energy infrastructure, which could expose millions of civilians to the bitter winter weather, are being planned in response to a string of battlefield losses. According to Pentagon officials, Moscow wants to overwhelm Ukraine’s missile defences and buy itself some time to reorganise its forces.

Austin said Russia was breaking the laws of war. “These aren’t just lapses. These aren’t exceptions to the rule. These are atrocities.”

Moscow disputes claims that its military targets civilians or civilian infrastructure on purpose. While refraining from directly intervening in a war against nuclear-armed Russia, the US and its allies have assisted in arming, informing, and preparing Ukrainian forces.

Austin vowed that the United States wouldn’t join Russian President Vladimir Putin’s “war of choice,” but he cautioned that if Moscow won, there would be a risk of widespread nuclear proliferation.

“Putin’s fellow autocrats are watching. And they could well conclude that getting nuclear weapons would give them a hunting license of their own. And that could drive a dangerous spiral of nuclear proliferation,” Austin said.

Austin claimed that Beijing, like Moscow, sought “a world where might makes right”. Austin claimed that Chinese aircraft were flying near self-governing Taiwan in record numbers almost every day and that China was increasingly engaging in what he called “dangerous interceptions” of American or allied forces at sea or in the air.

Since China held war drills close to the democratically run island in August following a visit by U.S. House Speaker Nancy Pelosi, tensions between Taipei and Beijing have increased.

Beijing, which sees Taiwan as a province of China, has long promised to annex the autonomous island and hasn’t ruled out using force to do so.

Beijing’s claims are rejected by the Taipei government, which asserts that only Taiwan’s citizens have the authority to determine the future of their country.

Austin said the United States was drawing on the lessons of Ukraine to “bolster the self-defense capabilities of our Indo-Pacific partners.”