More
HomeNewsRed alert in 8 districts as rains continue to wreak havoc in...
News 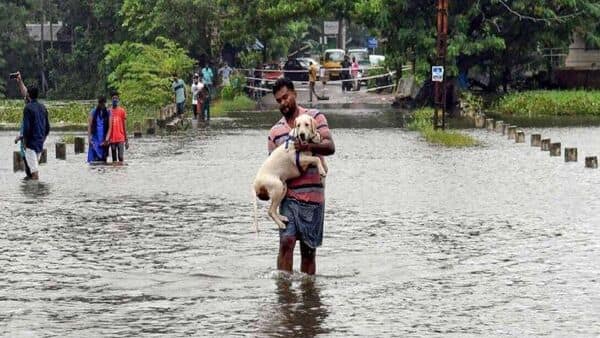 A red alert has been sounded in eight districts of Kerala by the Indian Meteorological Department (IMD) as incessant rain continued to hit different parts of the state, flooding roads and disrupting daily lives. The weather department issued a red alert for the day in the districts of Pathanamthitta, Alappuzha, Kottayam, Ernakulam, Idukki, Thrissur, Palakkad and Kannur. An orange alert was issued in the remaining districts except for Thiruvananthapuram where a yellow alert is in place.

The inclement weather in the state resulted in water levels of various rivers — such as Chalakkudi, Pampa, Manimala and Achankovil — in various districts rising close to or crossing danger levels.

As the rains intensified in the state and in anticipation of water in Chalakkudi river rising further, Kerala Chief Minister Pinarayi Vijayan warned residents along the river banks and those in low-lying areas of Thrissur and Ernakulam districts to be cautious and to be ready to evacuate as per instructions of the authorities.

The Chalakkudi river level is increasing due to release of water from the Peringalkuthu dam. Some of its shutters had to be opened due to heavy rainfall in its catchment area and around 16,000 cusecs of water coming from Tamil Nadu, Thrissur district officials said, adding that people on the river’s banks and nearby areas have been shifted to relief camps.

As the shutters of the Chimmini dam were also raised further in view of the heavy rains in Thrissur district, the water in Kurumali river — which is already above warning level — is expected to rise further, officials said.

The heavy rains also caused landslides in some parts of the state which also affected road traffic. The roof of an anganwadi building collapsed in Konni taluk of Pathanamthitta district, officials said and added that there were no casualties.

The CMO statement also advised the public to completely avoid night travel to hilly areas, those living near rivers, lakes and disaster prone areas to shift to relief camps, avoid going near rivers with high water levels and emergency kits should be kept ready at homes.

It further said that fake news should not be spread and for emergency help, the district disaster management authority’s toll-free number 1077 was available. Meanwhile, state Health Minister Veena George advised extreme caution against infectious diseases in view of the heavy rainfall in the state.

A holiday was declared for schools and educational institutions in various districts of the state a day ago in view of the rains, but in Ernakulam the announcement was made only after 8 AM on Thursday, leading to many students turning up in schools and then having to be sent back home. It led to widespread criticism of the Ernakulam District Collector on social media.

Meanwhile, the central meteorological department has predicted widespread rains in Kerala from August 4 to 8. Landslides and flash floods in Kerala triggered by heavy rains killed 18 people in the last few days, damaged hundreds of properties and displaced thousands to relief camps, the state government had said on Wednesday.

Share
Facebook
Twitter
Pinterest
WhatsApp
Linkedin
ReddIt
Email
Telegram
Viber
Previous article5 Key Things to Keep in Mind While Apologising To Your Partner
Next articleNaga Chaitanya on Meeting Sanjay Leela Bhansali: There Are So Many People I Want to Work With Over Here
MORE TRENDING ARTICLES
More
News