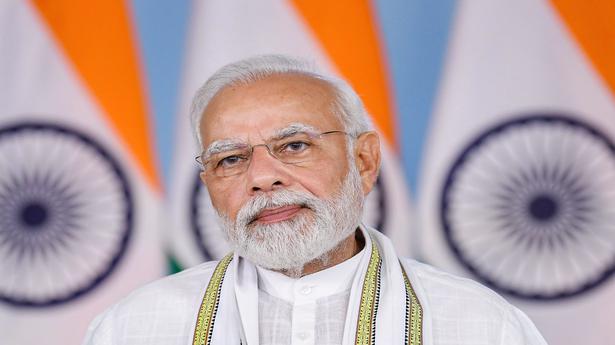 
Prime Minister Narendra Modi on June 23 appealed to exporters and the industry to fix long-term export targets for themselves and suggest ways to the government to achieve those figures.

Also read: Explained | How significant is the attainment of India’s $400 billion exports target?

Inaugurating the new Vanijya Bhawan in New Delhi, he said the government has removed over 32,000 unnecessary compliances.

He said that the new Bhawan will significantly benefit people associated with trade, commerce and the Micro, Small and Medium Enterprises (MSME) sector.

The Prime Minister also launched the NIRYAT (National Import-Export Record for Yearly Analysis of Trade) portal — which is developed as a one-stop platform for stakeholders to get all necessary information related to India’s foreign trade.

He added that exports play a critical role in transforming a developing country into a developed nation, besides creating job opportunities.

“Last year, despite global disruptions, India’s exports touched $670 billion… To achieve new targets, collective effort is necessary. Industry, exporters and export promotion councils are here. I will urge them to fix not only short-term but also long-term export targets for themselves,” he said.