More
HomeNewsOver 50 in cardiac arrest after stampede in at event in South...
News

Over 50 in cardiac arrest after stampede in at event in South Korea: Video 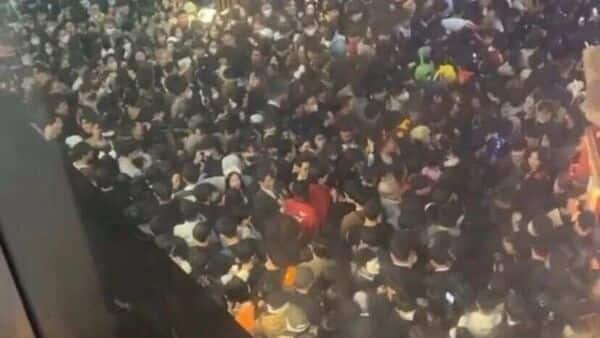 A Halloween party turned into a nightmare when around 50 people suffered cardiac arrest and several died in a stampede on a narrow street in Seoul, South Korea on Saturday.

The incident took place when more than one lakh people had joined the Halloween festivities in Itaewon’s streets of South Korea’s Seoul, reported AP.

[Breaking] Nightmare in #Itaewon. Current status is that over 50 people have collapsed and possible multiple fatalities due to overcrowding during the Halloween festivities. Stay tuned for more info. pic.twitter.com/NhvVqnHlkl

Choi Cheon-sik, an official from the National Fire Agency, told AP that around 100 people were found injured during the crowd surge Saturday night in the Itaewon leisure district. The severe stampede left many lying on road and dealing with cardiac arrest as of early Sunday.

The official informed that the situation went out of control when a large crowd began pushing forward in a narrow valley near Hamilton Hotel and crushed many people to death. Hamilton Hotel is a major party spot in Seoul.

Emergency officials informed that they received 81 calls from people facing breathing problems after the accident.Authorities are still looking into the exact origins and the cause of this accident. Around 140 ambulances reached on spot after receiving information.

After receiving the news of the incident that is expected to cause huge casualties, more than 400 emergency workers across the nation and all those available in the capital were deployed on the streets to treat the injured. In the videos of the incident, many first responders can be seen performing CPR on people lying scattered in the street.

As of now, officials haven’t released any official data on deaths caused by the accident. Confirming on-the-spot CPR given to multiple injured people, Police informed that many of them were immediately taken to nearby hospitals.

An officer, requesting anonymity, told AP that details of the incident are still under investigation. He received information that a crowd swelled into a stampede on Itaewon’s streets. People thronged to the location to celebrate the Halloween festivities.

According to a local media report, the stampede occurred when a large number of people began moving towards Itaewon bar after knowing about the visit of an unidentified celebrity.

South Korean President Yoon Suk Yeol has ordered officials to ensure swift treatment for the injured people and carefully examine the safety of the festivity sites. Taking a hint of a rise in the number of casualties and injured people in the coming hours, he instructed the Health Ministry to swiftly deploy disaster medical assistance teams. Nearby hospitals are instructed to arrange additional beds to treat the injured.