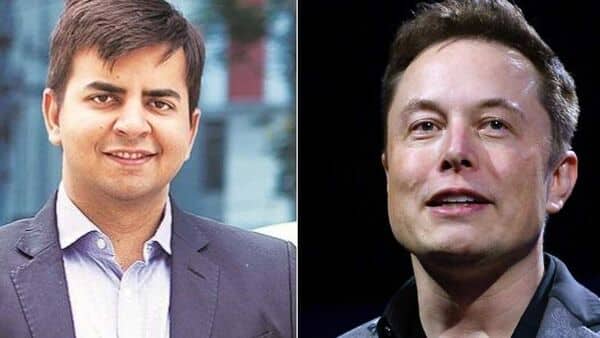 Ola Electric CEO Bhavish Aggarwal has said that granting special treatment to Elon Musk’s Tesla to come to India is not in the interest of the country as the New Delhi works to accelerate the growth of the homegrown companies in the electric vehicle sector.

In a report in Finacial Times, Aggarwal said, “Tesla is free to come in and put here and sell its cars. They just want to be treated differently from others, which I believe is not in the interests of India”.

Tesla CEO Elon Musk has shown interest in expanding his electric car business in India several times, but based on certain conditions. As a result, the Indian government has also given a cold response to the billionaire.

Recently, hinting that Tesla will not put a manufacturing plant in India, Musk tweeted that until the company is first allowed to sell and service imported cars in the South Asian country there will be no setting up of the bases.

However, Union Minister for Road Transport and Highways Nitin Gadkari has said that Musk was welcome to manufacture e-vehicles in India. “In case Elon Musk wants to build in China and sell here, Gadkari said it would not be a good proposition”.

“It is a very easy alternative; if Elon Musk is ready to manufacture a Tesla in India, there is no problem. We have got all competencies, the vendors are available. We have got all types of technology and because of that, he can reduce the cost,” Gadkari had said.

Tesla has enjoyed tremendous success in China, where it helped develop a nascent industry. In return, China offered the company incentives, including tax breaks and low-interest loans, FT reported.

The Ola boss is trying to boost India’s nascent electric vehicle market with the launch of electric scooters in the country. Ola is among the handful of companies in the country that won a tender under India’s $2.4bn programme to boost local battery cell production. Mukesh Ambani’s Reliance Industries and Hyundai have also won the same tender.

Ola launched in 2010 as a ride-hailing app, it has expanded into other services, such as deliveries, used-car sales, and selling insurance.

It founded Ola Electric, an electric mobility company, in 2017, buying Dutch electric scooter start-up Etergo in May 2020 for an undisclosed sum. The company is now India’s biggest producer of electric scooters, with total sales of over 50,000.

The Bengaluru-headquartered company began deliveries of its first rechargeable scooters in December 2021. However, after one scooter caught fire in March, Ola recalled the batch of 1,400. Aggarwal told the US daily that the incident was “isolated”, and added “In very, very rare cases this can happen as have happened with other manufacturers of other EVs”. He said Ola was co-operating with a government investigation launched in March into electric scooter fires.