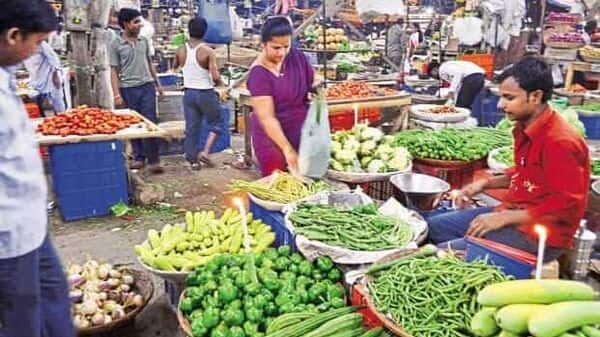 The November inflation print of 5.88 per cent provides impetus to end the rate hike cycle, economists at the country’s largest lender SBI said on Monday.

The officiald ata showed that consumer price index (CPI) based inflation cooled to 5.88 per cent in November, the first time that it has come within the RBI’s target band this year.

The economists termed RBI rate stance as ‘hawkish’ as it has hiked rates by a cumulative 2.25 per cent since May to fight inflation, they said, “Indian headline CPI for the month of November is providing impetus to end of rate hike cycles in India.”

As per their note, the hawkish monetary policy may be able to get domestic inflation under control.

They added that as long as US inflation does not come under control, the Federal Reserve may have to increase rates, giving incentives for capital outflows from emerging markets resulting in exchange rate volatility and currency depreciation.

The economists, however, feel that headline inflation will rise up again to be in the 6.5-6.7 per cent range in December 2022-January 2023, and will decline materially to 5 per cent by March 2023.

“We now maintain a minimal probability of a February terminal 25 bps rate hike. However, that will also be accompanied with a change in stance to neutral, if it was to happen so,” the note from SBI economists said.

The RBI will be in a vantage position of taking a considerate view in February policy, given that the rate setting panel will meet after the announcement of the Union Budget — the last full document for the present government — and the US Fed’s FOMC meeting, it said.

Pointing to the consumer non-durables segment, the note said 57 per cent of the total decline for November was driven by this aspect, and called it as “worrisome” because it reflects slackening pace of rural demand.

However, peer economists were not as forthcoming on the expectations.

“… pressure continues with prices of cereals, milk and spices rising both on-year and sequentially. To boot, core inflation remains sticky at 6% on-year and remains a major risk for the headline number,” economists at leading credit rating agency Crisil said.

Its peer Icra said the headline inflation slipping below 6 per cent was unexpected and surprising, and added that the sharp easing is courtesy a base-effect led cooling in food inflation and a correction in vegetable prices.

However, in what was called as a worrying aspect, there was a sequential uptick in the year-on-year inflation for miscellaneous items, fuel and light, and pan, tobacco and intoxicants.

“How much the CPI inflation eases further in December 2022 will hold the key to the MPC’s (monetary policy committee) February policy decision on rates, as the contraction in the IIP is expected to be transitory, reversing after the festive holiday period,” it said.

India Ratings and Research said “while the headline inflation is under the RBI’s target, sticky core inflation needs continuous monitoring and the RBI is unlikely to lower its guard against inflation.”