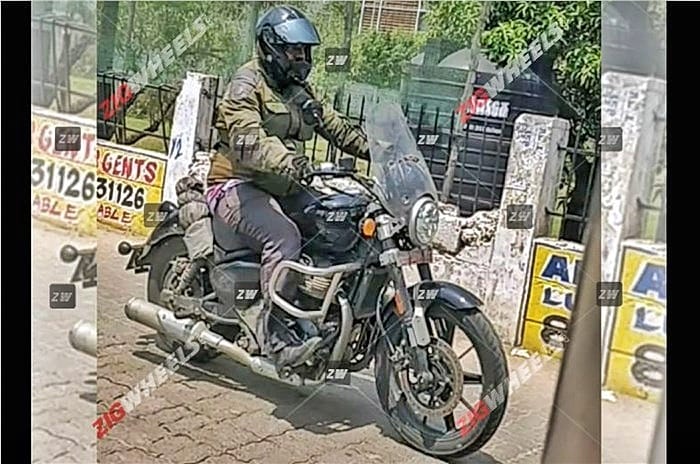 The new Royal Enfield 650cc cruiser is expected to be revealed in the coming months.

Royal Enfield has been busy testing the upcoming 650cc cruiser for quite a while and the latest spy photos reveal the bike in what appears to be near-production form.

The test mule is seen with a large, tear-drop-shaped fuel tank, triangular side panel and curved fenders. The position of the tail-light and the number plate holder, as well as indicators, seem akin to what we’ve seen on the Royal Enfield Meteor 350. In a previous spy photo, we also noticed that the switchgear and round instrument cluster resemble the one on the Meteor 350, fuelling speculation that Royal Enfield might call its new 650cc cruiser, the Super Meteor.

The motorcycle has a long, low stance, typical of a cruiser motorcycle. The foot pegs are forward-set, while the rider is seated upright, holding on to a wide handlebar.

It’ll be interesting to see what type of colours, variants and parts for customisation are available in the product catalogue. Speaking of, the test bike is seen wearing a comprehensive windshield and crash protection bars. Whether these are accessories or standard fitment is something we’ll find out at the bike’s launch.

Other details visible on the test bike include a USD fork and what should be preload-adjustable twin shock absorbers. Braking duties are taken care of by disc brakes at both ends, while dual-channel ABS will also be available. The bike rides on a set of new alloy wheels and not the wire-spoke rims we currently have on the Interceptor and Continental GT 650. Although, the latter is expected to get an alloy wheel-equipped variant, if recent test bike sightings are anything to go by.

The upcoming cruiser from RE is expected to sport the same air- and oil-cooled, 648cc parallel-twin derived from the existing Interceptor 650 and Continental GT 650. In the 650 twins, this engine makes 47hp at 7,150rpm and 52Nm at 5,250rpm, and comes mated to a 6-speed gearbox with a slip-and-assist clutch. Expect minor changes to the peak output figures, if any.

The company is expected to reveal the new 650cc cruiser in the coming months, followed by an Indian and global launch. In terms of competition, the bike will go up against the Benelli 502 C.