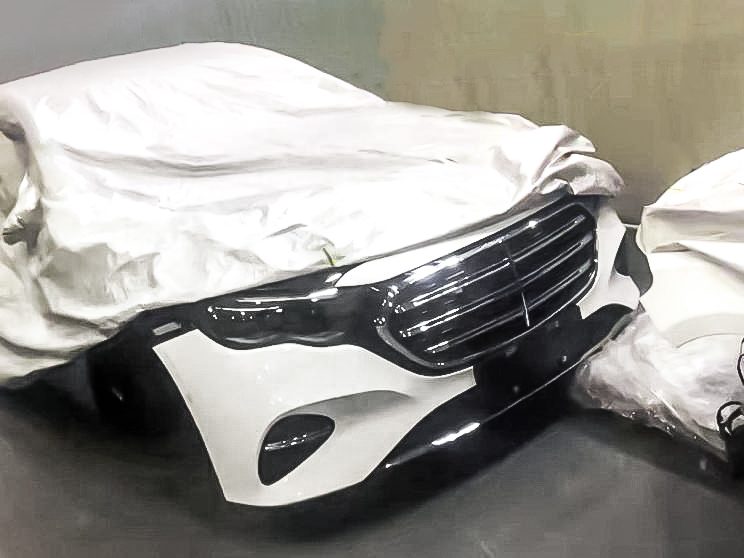 Mercedes-Benz is readying the all-new E-Class sedan for a global debut in the coming months. While the standard-wheelbase variant of the next-gen E-Class has been seen many times, fresh spy photos that have surfaced online now give us a glimpse of its long-wheelbase version (Codename: V214). Mercedes sells the E-Class LWB in markets like India and China.

The next-gen E-Class sedan will get a fresh design, with a mix of styling cues from newer Mercedes-Benz models like the S-Class and some unique bits to differentiate it from the brand’s other sedans. The headlamps are expected to get a new design with a wavy pattern below. Both lamps will join the much larger grille, which itself will come in multiple designs. Sportier versions of the model will get a two-slat grille with a big, three-pointed star at the centre.

On to the sides, the latest spy photos reveal the car’s extended wheelbase, and while the final design remains hidden, its overall stance looks similar to the S-Class. The pictures also confirm that the long-wheelbase E-Class will continue to have a different rear door design and a quarter glass aft of the rear door, similar to the current-gen E-Class LWB and also the Maybach S-Class line-up.

While the new E-Class will not get the waterfall-effect, vertically oriented touchscreen, it will come with a dashboard layout similar to the EQE and EQS electric sedans. The set-up includes digital instruments in a freestanding display panel, optionally with 3D graphics, and a widescreen display within the centre console for infotainment functions.

One of the last models to be based on Mercedes-Benz’s existing MRA platform, the new E-Class sedan (standard version) will get a slightly longer wheelbase than today’s fifth-generation model that’s sold in markets other than India and China.

As reported by us earlier, the engines for the next-gen W214 E-Class, mounted in their traditional longitudinal position, will be reduced in number. This will also apply to a few other models, depending on the market.

The existing M254 four-cylinder petrol and OM654 four-cylinder diesel units will be offered exclusively with an integrated starter-generator and a 48V electrical system. Also, changes to their exhaust system will allow them to meet the upcoming Euro 7 emission regulations.

The 2.9-litre, in-line, six-cylinder turbocharged M256 petrol and the 3.0-litre, in-line, six-cylinder turbocharged OM656 diesel units will receive similar upgrades and be offered with both mild-hybrid and plug-in hybrid functionality, making up to 435hp and 330hp, respectively. Plug-in hybrid versions are set to receive a 28.6kWh battery, the same unit used by the S580e, to give them an electric range of over 100km.

The engines are set to be combined with a standard 9-speed torque-converter automatic gearbox. While lower-end models will get rear-wheel drive, Mercedes-Benz’s 4Matic four-wheel-drive system will appear on more powerful models, including those from AMG.

The facelifted E-Class was introduced in India in March 2021 and is sold only as a long-wheelbase version. Expect Mercedes-Benz to unveil the new E-Class (standard version) sometime next year, with its India debut set to take place a little later.