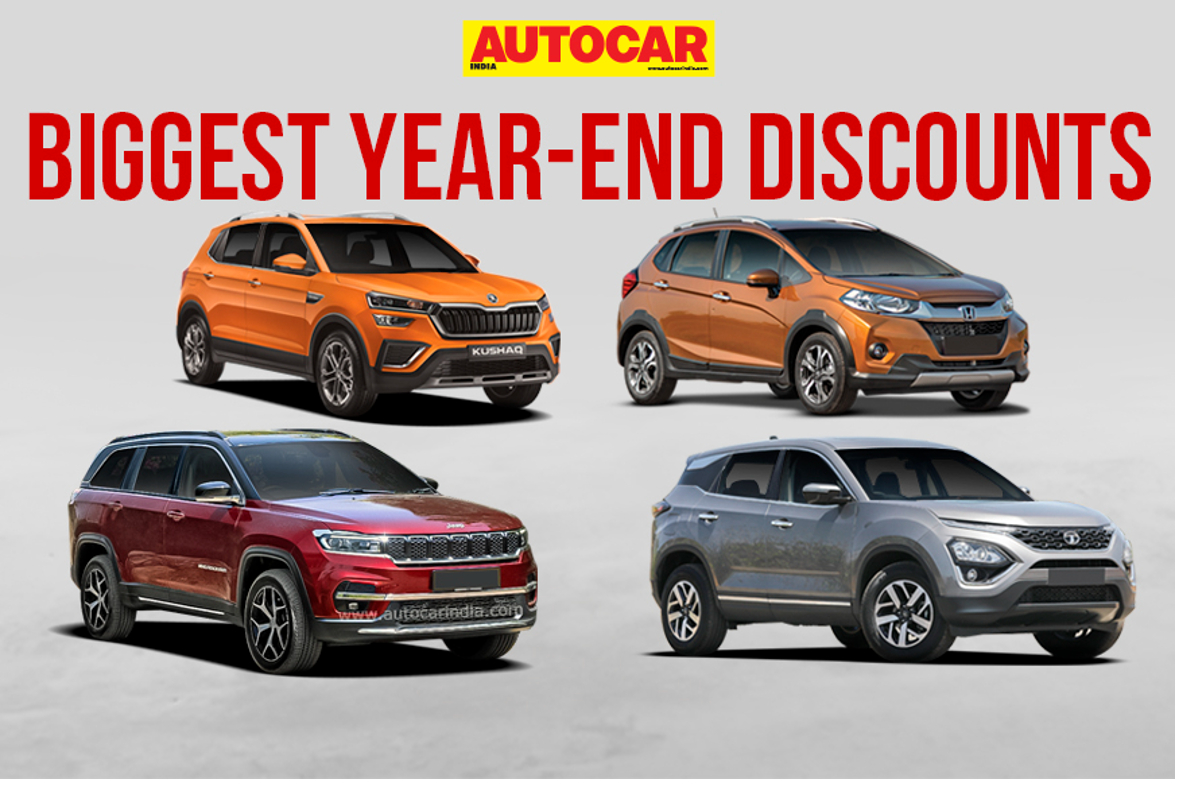 Brands including Maruti Suzuki, Mahindra, Tata and Hyundai are offering big year-end benefits on their products.

As another year comes to an end, manufacturers are offering attractive discounts across their products to clear their inventories. Major brands like Maruti Suzuki and Tata have tempting year-end offers on their range of hatchbacks, sedans and SUVs. Discounts offered this time are comparatively better than last year, thanks to easing of supply chain issues and, therefore, greater availability of models.

Here are some of the best year-end deals we found currently available on popular models.

Launched earlier this year, the Meridian is a three-row SUV based on the Compass, and is available in two variants. It is powered by a 170hp, 2.0-litre diesel engine mated to either a 6-speed manual or a 9-speed automatic transmission. Its ability to tackle rough roads and the great ride and handling balance that it offers are some reasons to go for the Meridian. Now, the SUV is also offered with the highest year-end discounts, totalling up to Rs 2.5 lakh.

Jeep is offering total discounts of up to Rs 1.5 lakh on its popular Compass SUV. The Compass  comes in multiple trim levels and is powered by either a 163hp, 1.4-litre turbo-petrol or a 173hp, 2.0-litre diesel. Gearbox options include a 6-speed manual, a 7-speed DCT and a 9-speed automatic, depending on the engine. The Compass impresses with its impressive cabin, long feature list and good dynamics.

Skoda’s Creta-rivalling midsize SUV is powered by either a 1.0-litre or a 1.5-litre turbo-petrol engine. A 6-speed manual gearbox is standard on both. However, the smaller engine gets an option of a 6-speed automatic, while the larger engine can be had with a 7-speed DCT. The Kushaq is well equipped, has strong performance and recently scored a five-star rating under Global NCAP’s new protocols. For December, Skoda is offering generous total discounts of up to Rs 1.25 lakh on the SUV.

The cousin model to the Skoda Kushaq, the Taigun is powered by the same engine and gearbox combos as the Kushaq. It comes with eight variants, and for the month of December, Volkswagen is offering total discounts of Rs 1 lakh on the midsize SUV. Along with the Kushaq, the Tiguan also secured a five-star rating in Global NCAP’s updated safety test.

The brand’s flagship model, the Safari, gets a total discount of up to Rs 1 lakh. The Safari is available in multiple trims, but is powered by a sole 170hp, 2.0-litre diesel engine paired to either a 6-speed manual or 6-speed automatic gearbox. The three-row SUV’s strengths lie in its impressive road presence, space – especially in the third row – performance, and good ride and handling balance.

Like the Safari, the Harrier also gets a year end discount of Rs 1 lakh. The Harrier shares the same powertrain and underpinnings as its three-row SUV counterpart and scores high with its spacious interior, tough build quality and smooth automatic transmission. The Harrier competes with the likes of the MG Hector.

Mahindra is offering benefits of up to Rs 75,000 on the W8 (O) trim of the XUV300. The compact SUV is offered with a choice of three engine options – a 110hp, 1.2-litre turbo-petrol, a 117hp, a 1.5-litre turbo-diesel and the newly introduced 131hp, 1.2-litre turbo-petrol. Depending on the engine, buyers can either opt for a 6-speed manual or a 6-speed AMT. It’s pretty well equipped across all variants with a premium cabin, thus, making for a well-rounded package.

Nissan only offers two products in India – the Magnite and Kicks. The latter will soon be discontinued in India as it is a slowselling model for Nissan, and, upgrading it for the upcoming RDE norms will be an expensive affair. However, Nissan is offering Rs 70,000 discount on the SUV. The Kicks is offered with a 106hp, 1.5-litre petrol engine as well as a 156hp, 1.3-litre turbo-petrol engine. While the former is offered with only a 6-speed manual gearbox, the latter also gets the option of a CVT gearbox.

Honda is offering benefits of up to Rs 75,000 on its soon to be axed WR-V crossover. It is currently offered with a 90hp, 1.2-litre petrol engine as well as a 100hp, 1.5-litre diesel engine, both of which only get manual gearboxes. As the crossover derivative of the Jazz, the WR-V sports a slightly raised ride height, tweaked styling, and a spacious, well-packaged interior. It is likely to be on sale till March 2023.

The fifth-generation Honda City has become a hugely popular model in the midsize sedan segment thanks to its spacious cabin, supple ride quality and premium features. Honda is offering benefits of up to Rs 75,000 on variants with the manual gearbox. The City is powered by a 121hp, 1.5-litre petrol engine as well as a 100hp, 1.5-litre diesel engine. However, Honda will discontinue the diesel powertrain with the advent of the upcoming RDE norms. Along with the 6-speed manual gearbox, the City is also available with a CVT gearbox.

Maruti Suzuki’s high-riding hatchback has discounts of up to Rs 75,000 in December. The S Presso is powered by a 1.0-litre petrol engine churning out 67hp and 89Nm of torque. This engine is also available in CNG guise and produces 57hp and 82Nm. While the petrol versions also get a 5-speed AMT gearbox, the CNG is only available with a 5-speed manual gearbox.

Hyundai is offering discounts of up to Rs 1 lakh on the Turbo variants of the Grand i10 Nios. It is powered by a 1.0-litre turbo-petrol engine that produces 100hp and 172Nm of torque, and comes mated to a 5-speed manual gearbox.

Disclaimer: Discounts vary from city to city and are subject to the availability of stock. Please check with your local dealer for exact discount figures.