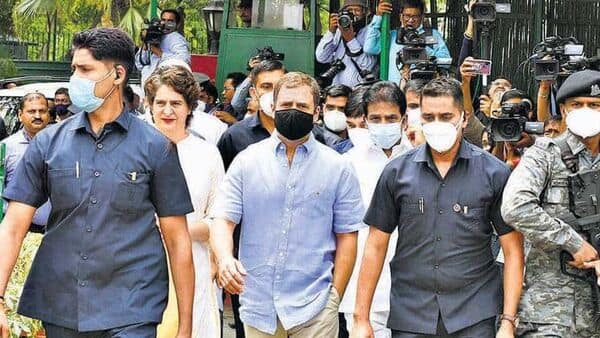 Former Congress Party President Rahul Gandhi on 23 June said that he was not affected by the Enforcement Directorate (ED), which questioned him for five days over his alleged role in the National Herald case.

While interacting with the party workers at the AICC headquarters, Gandhi said, “ED and such agencies don’t affect me, even the officers who interrogated me understood that a leader of the Congress party can’t be scared and suppressed.”

“BJP government is weakening our army. The country will suffer, and these people call themselves nationalists. It is our duty to protect the future of youth,” he added.

Appreciating the efforts of the Congress party, the Congress leader said, “There is no shortage of patience in truth. Truth never gets tired. Lies will get tired, but the truth never does.”

Thanking party workers for their support during the ED questioning, Gandhi acknowledged that he “was not alone” and that they were “fighting for democracy” with him.

On Tuesday, Gandhi was summoned for the fifth time for another round of questioning. The ED had summoned Rahul last Monday and questioned him for three straight days.

Earlier in the day, Congress leader Sachin Pilot alleged that the party’s leadership was being targeted. “Those in power are targeting the dissidents. It is clearly a politically motivated move. It is not just about Sonia Gandhi or Rahul Gandhi, but the entire Opposition,” he said to ANI. “The Congress leadership is being targeted because they have been vocal against BJP,” he added.

Accusing the BJP-led government of weakening the armed forces with “new deception”, Congress leader Rahul Gandhi on Wednesday said that the government will have to withdraw the Agnipath recruitment scheme and the party is with the youth in the agitation to save the future of the country.

In a tweet, Gandhi alleged that China’s forces are sitting on Indian land and said the defence forces should be strengthened. He attacked Prime Minister Narendra Modi over the Agnipath scheme which allows youth to serve in the armed forces for a period of four years.

Congress leader Rahul Gandhi left the Enforcement Directorate office in Delhi after 12 hours of questioning in a money laundering case on Tuesday.

“Rahul Gandhi is being constantly called for inquiries to get information. Five days to inquire? All registrations and information are available to ED. They can finish all inquiries in half an hour,” Kumaraswamy told reporters.

He alleged that the President of the Contractors Association in Karnataka had written to the Prime Minister and complained about the 40 per cent commission. “Why wasn’t inquiry done here?” the JD-S leader asked.

Meanwhile, Sonia Gandhi, on 22 June has sought postponement “by a few weeks” for her appearance before the ED till complete recovery from COVID-19 and a lung infection. The agency has accepted her request for deferment of summons.

The Congress chief had been summoned on June 23 by the ED.

Sonia Gandhi had been undergoing treatment at Delhi’s Sir Ganga Ram Hospital from June 12 and was discharged on June 20. She had developed profuse bleeding from the nose following the COVID infection and had also undergone a follow-up surgery.

The ED is investigating the Gandhis’ role in what is known as the National Herald case. It involves the Young Indian’s takeover of AJL (Associated Journals Limited), the company that ran the National Herald newspaper, a Congress mouthpiece which has since transformed into an online-only outlet.