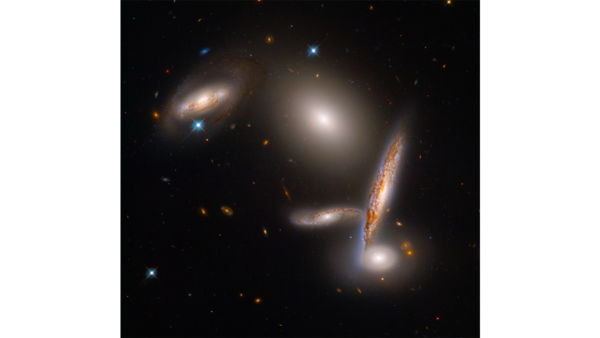 The Hubble Space Telescope just turned 32! And to celebrate the occasion, NASA has shared a photo clicked by the telescope of an unusual close-knit collection of five galaxies, called ‘The Hickson Compact Group 40’.

This group includes three spiral-shaped galaxies, an elliptical galaxy, and a lenticular (lens-like) galaxy. These different galaxies somehow crossed paths in their evolution, resulting in an eclectic galaxy sampler.

The whole group is so crowded that it could fit within a region of space that is less than twice the diameter of our Milky Way’s stellar disk.

Astronomers have studied this compact galaxy group not only in visible light, but also in radio, infrared, and X-ray wavelengths. Almost all of them have a compact radio source in their cores, which could be evidence for the presence of supermassive black holes.

X-ray observations show that the galaxies have been gravitationally interacting due to the presence of a lot of hot gas among the galaxies. Infrared observations reveal clues to the rate of new star formation.

Though over 100 such compact galaxy groups have been cataloged in sky surveys going back several decades, Hickson Compact Group 40 is one of the most densely packed.

How rare are such groups?

Though such cosy galaxy groupings can be found in the heart of huge galaxy clusters, these galaxies are notably isolated in their own small patch of the universe, in the direction of the constellation Hydra.

There’s a lot of dark matter (an unknown and invisible form of matter) associated with these galaxies. If they come close together, then the dark matter can form a big cloud within which the galaxies are orbiting.

As the galaxies plow through the dark matter, they feel a resistive force due to its gravitational effects. This slows their motion and makes the galaxies lose energy, so they fall together.

Therefore, NASA says, the Hubble has captured this snapshot of the galaxies at a very special moment in their lifetimes. “In about 1 billion years they will eventually collide and merge to form a giant elliptical galaxy,” said the space agency.

It is a large, space-based observatory that has transformed astronomy since its launch and deployment by the space shuttle Discovery in 1990. The telescope has captured 1.5 million observations of almost 50,000 celestial objects till now.

It is named after the pioneering astronomer Edwin Hubble.