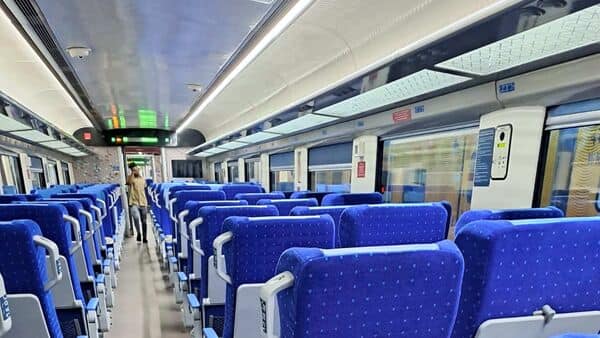 India’s sixth Vande Bharat Express train was flagged off by Prime Minister Narendra Modi from Nagpur on Sunday, 11 Decemeber. Speaking about the event, Saket Ranjan, the Chief Public Relations Officer of South East Central Railway said, “This is the first train which is running at the speed of 130 kmph in the area. Apart from being the first Vande Bharat train between the two states, its biggest feature is the interior design which is like a complete aeroplane and the whole train is equipped with armour. It can run at a maximum speed of 160, but our maximum speed is 130.”

The new Vande Bharat will be running from Nagpur to Bilaspur at a maximum permissible speed of 130 kms/hr and will be covering a distance of 412 kms in just 5 hours and 30 minutes.

The train, which will run from Nagpur to Bilaspur, will be having six stops including Gondia, Rajnandgaon, Durg, Raipur and Bilaspur. The new Vande Bharat Express will be running at a speed of 130 to 160 kilometers per hour.

The new Vande Bharat Express will have 16 chair-car coaches made of steel, having a seating capacity of 1128 people. On the other hand, the train will also have mobile charging, Li-fi, air conditioning in all the seats and CCTV cameras installed in all the coaches for security.